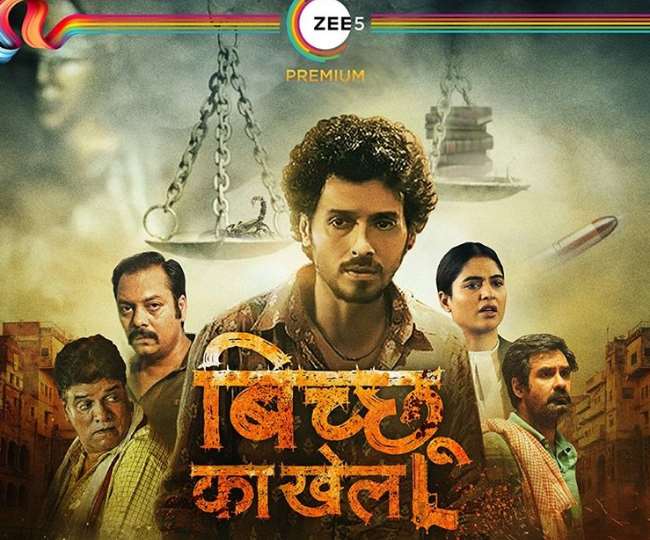 Zee5 Bichoo Ka Khel: Some  more mayhem and maha-mari in the land  of   bakchodi  and maara-mari. The small-town formula  which started  on the big-screen with  Anand Rai’s  Tanu Weds Manu then went  in Barelli Ki Barfi. That formula has now  stagnated into  a bomb ka gola exploding erratically  in and around the backwater  of Uttar Pradesh.Ganga maiyya ki  Jai ho!

I  liked the cheesy camaraderie between  Divyendu Sharma and  his screen dad  Mukul  Chadda. While Daddy  has his little  fun on the side , Beta  stands guard  outside…If you think that’s  cringy,then well..you are in the wrong place.  The  mofussil mayhem and  the tawdry titillation  of  the  cow belt  is  by now  a streaming reality . Deal with it.

Sadly  the  father-son  locker-room bonding ends  all too soon and  Divyendu’s Akhil Bhaiyya  goes on a revenge rampage that  involves  seedy  politicians , sexually active women and  corrupt cops , all  of  whom  share a common affinity  to  foul language and high-octane  pulp drama.

It’s sad to see  this series enthusiastically  recreating the Mirzapur flavor when  it could have  been a lot  more than  just a cut-and-paste  job. Nonetheless Divyendu is an actor who refuses to be  daunted  by  repetition. He  works towards making Akhil Bhaiyya far  more  amusing and far  less intimidating than Munna Bhaiyya.But seriously,  it’s time for  an image-change for Divyendu and  the  series on desi spaghetti westerns with the body count being matched by  the bawdy backchat.

Zee5 Anamika:  Adultery is  no laughing matter. But if  it goes into the hands  of  Hera Pheri director Priyadarshan , it could become  a  source  of unintended hilarity.Providentially Priyan controls the urge to  invoke  mirth  out of a potentially tragic story.Hopping gingerly into a neglected  sexually unfulfilled  housewife’s  wild passionate  affair with a young handsome  stranger  is  familiar terrain in Indian cinema(Satyajit Ray’s Charulata  being the  classic rendition of this theme)   but not an easy  route to take  for  any filmmaker.

While  dealing with the wife’s unfaithfulness the  narrative is overly  faithful to  all the  clichés  of  adultery . Harsh Chaya’s workaholic  husband’s  character is  done in such broad strokes  that he  appears  a caricature of  an uncaring husband.Pooja  Kumar as the torn wife gives an over-stressed theatrical performance. Every emotional response  is recorded on  her face in  italics.Aditya Seal as  the handsome stranger who sweeps the housewife  off her feet  struggles to be  convincing against all  odds. It’s losing battle. The  chemistry with his co-star  is  zero and their  big love-making scene is devoid  of  any noticeable passion.However Seal is an  actor with the potential to shine even in a situation less than  divine. He  makes a tsrong impact as a dark sinister stranger with a  past  who has a blast. Pun intended.

How they meet is an amusing courtship game involving a lost wallet , a ring and a debt  that seems to have written by  someone who believes anxiety  can be funny if  put  in  the  right hands. We can see  the  big revelation  at the end  coming at us  from miles away  in this  short film

Related Topics:zee5Zee5 news
Up Next