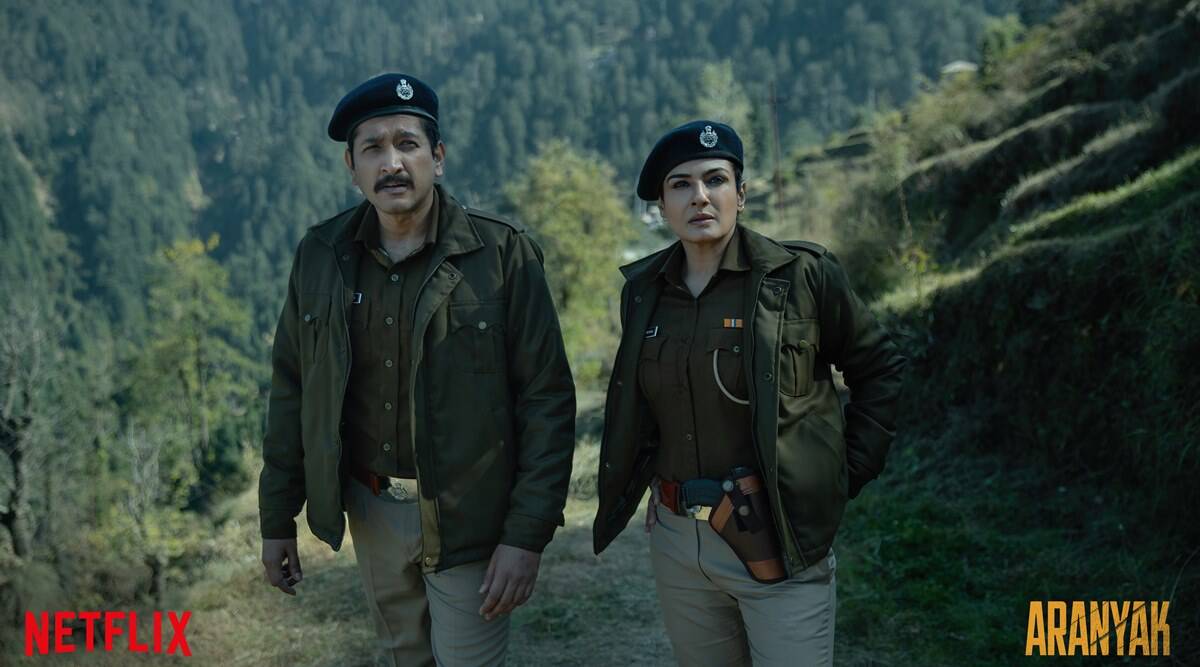 Aranyak Movie Review: No comparison  intended. But in Satyajit Ray’s classic  Aranyer Din Ratri the forest held so much mystery and intrigue,  it was almost like exploring  a universe  of foliage in search of the true meaning  of life.

The  forest in Aranyak is also  crammed with  mysteries, as a series of murders  occur  in the  thick  of the forest. The  gruesome goings-on in  the greenery  are attributed to a beast called the nar-tendua, half-man half-beast, full  monster.

So is  the nar-tendua responsible for the  multiple killings? Or is  a  deadly human impersonating the  beast-man’  bestial  bloodshed technique?  The answer to that is  of course obvious. Aranyak milks the  mystery  of the  forest. But it  doesn’t go deep enough.  The  director  Vinay Waikul , relatively new to the craft,  stops short of  exploring the wide mysterious  landscape.

Most  of  the tense narrative is  confined  to the indoors with the actors  captured in  clenched  sweaty  close-ups  as  they open up old wounds that  never healed.

The series  opens with the brutal murder of a French tourist Julie’s daughter Amy. Julie’s “French” accents  proves as  elusive as  the murderer, slipping in and out at will. Raveena Tandon’s pahaadi accent is more reliable. She plays  a hard-nosed gritty cop  on the  verge of taking  a year-long  sabbatical from her official duty,when the  serial killer strikes.Her role has echoes  of  Mita Vashisht in  the far-superior series  Your Honor.

Raveena  in  her  OTT  debut is impressively transformed . Her scrubbed face, suspicious eyes and tense alert  body-language  constantly convey that Kasturi Dogra knows more than she  is  willing to  divulge.

Kasturi’s partner in crime is the ever-dependable  Parambrata Chattrerjee  . Does he  ever give  an inept performance? As  Angad Malik , the cop  who   initially comes  to take over  Kasturi’s  job but soon  makes her his chief accomplice in crimebusting, Parambrata  gives  Raveena  just the right queues.

Sadly the  plot  lets them down at all the crucial  points. Where there should have been high drama , there  is a sense of anti-climax. The  denouement is specially disappointing. Indian  whodunits think zeroing in on the most unlikely suspect is  the best methodology to wrap up  a  suspense  drama. In truth the lies and redherrings are a huge distraction to a  credible  conclusion to the  whodunit.

The  supporting actors hardly get a  chance to  emerge  from the  thick foliage. Ashutosh  Rana ,Meghna  Malik and Zakir Hussain are actors who  never  let the plot down even if the plot  chooses to let them  down. They grapple valiantly   but in vain with the improbabilities in the plot. The  young cast comprises of characters who are either in serious trouble   or looking for it.

There are many gaping wounds and open cesspits in this messy  serial on a serial killer on the prowl. What works is the work relationship between  Tandon and Chatterjee. Tandon’s effort to be  a good mother and a good wife(the latter includes buying sexy lingerie ,a  desperate  move that  prompts  a sarcastic comment  from her  husband on  “supermom,  masterchef and  Sunny Leone”) while being a conscientious  cop are  well conveyed .

The   series  could have gone for the jugular—like the killer does—but instead  choose to just prod  some secondary veins.