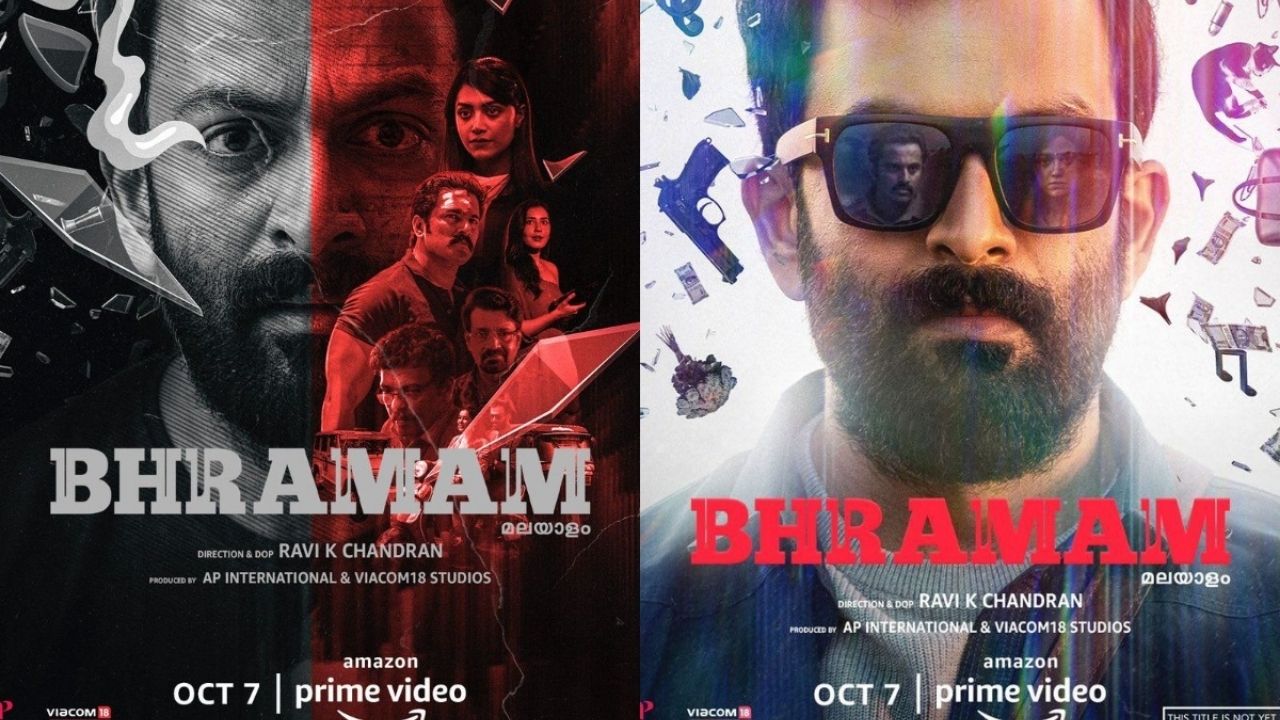 Prithviraj Sukumaran pretty much nails  it in remake Bhramam

Plot
A pianist pretends to be blind for inspiration, witnesses a murder. He suddenly finds himself in a blind spot with the victim’s wife, the murderer. During this ordeal, he loses his eyesight for real. Will his girlfriend believe him?

I don’t know  how  he  did it. But  playing the  devious pianist who  may  or  may not be—then again he may be—blind from Sriram Raghavan’s  game-changing 2018 suspense thriller  Andhadhun, Prithviraj Sukumaran pretty much nails  it in remake  Bhramam.  He  is  charming and vulnerable, sly and silly, victim and  perpetrator, all at once in Bhramam.

It is  as  accomp-lished a performance  as Ayushmann  Khurrana in the original. In all details cinematographer Ravi K Chandran’s  directorial venture adheres  pretty much  to the original. And yet  the  narrative  has wacky local flavor specially in the way the second-half in a deserted  organ-translation hospital is  turned into some  kind of comedy of errors. The doctor in charge  (played by Jagadish Kumar) is  crazy enough to  look like  a character  out of an illustrated  comic strip on demented doctoring. And  the two  commoners,  the  autorickshaw driver and the lottery-ticket seller who  help/betray/betray/help Ray seem more confused than the  plot of Bhramam demanded them  to be.

Nonetheless Prithviraj’s  undeniable  charm and striking screen  presence sees the patchy  episodes  through,leaving us  with  a  remake far more palatable than  what was done to  Bhramam in  Tamil and Telugu recently. Prithiviraj  gets the  point of  the  opulently satirical  original. He  has loads  of fun playing blind whenever  it suits  him.

The main murderous  mess  where an  unfaithful wife  carries out her husband’s murder  with her  lover  while the hero plays the piano blindly,  is  undertaken in  the  don-t-mind-the-mayhem spirit that  underlined Shriram Raghavan’s pitch-perfect Bhramam crime satire which was driven by some  wildly  improbable coincidences.

Also Read:  Amazon’s Modern Love Is Well Worth Investing  In

Those  steep turns of  fate in the original appear far more contrived and improbable here. What  are the chances that  the man blind Ray “sees”  helping the  adulterous wife  in murdering  her husband  would turn out to be the cop in-charge the next morning at the police station when Ray arrives to report the crime?

There is something missing here. Something vital is absent from Mamta Mohandas’ performance as  the  murderous wife in Bhramam. She is  no doubt a  well-versed actress. But she is unable to swathe  the frames in a  captivating  enigma the way Tabu  did.

I didn’t miss Ayushmann in  the  remake  for  even a  second. But I sorely missed  Tabu specially in the  sequences where she takes on her “blind”  adversary  head-on. Some other actors in smaller parts  are interesting, for instance Ananya Nair as  Simi’s lover’s  blindly devoted  bullying wife and Leela Samson as  Simi’s nosy  neighbour .

The jazz-imbued songs did not impress me, although the  playback singer doing Prithviraj’s  songs  sounds  incredibly like him. There are  echoes and voiceovers  of life’s most ambivalent  turning-points   all across the Bhramam, furnishing the theme of  vision without eyesight with an inner  glow. But the  spark and shock of the original is forfeited  in  the remake. Still ,if you  liked Andhadhun  there is  no reason Bhramam would displease you.

Prithviraj: “I can’t be complaining about all ups and downs”