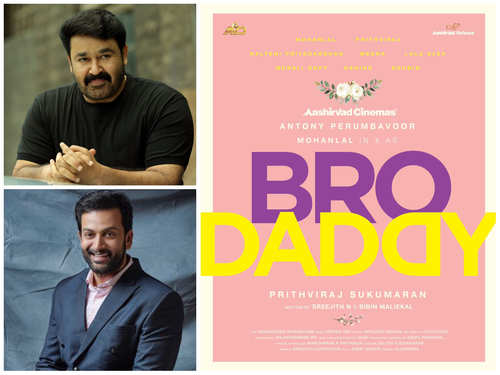 Bro Daddy Trying So Hard To Be  Cool

First   things  first. Why  on earth  would two  such towering giants of Malayalam  cinema  as  Mohanlal and  Prithiviraj Sukumaran  get together  for something as lightweight as this? Unless it was for  this very reason: that some idiot  like me would ask this  silly question…  But sorry, boss. When  Prithviraj directs   the mighty Mohanlal I want to experience  something as  potent as Lucifer, the  2019 massy masala-dosa garnished with  spicy spine tingling stuffing  with which Prithivraj made his impressive  directorial debut  .

I can  see  where this new  Mohanlal-Prithviraj alliance must have  come from. Fanboy that he is,Prithviraj   must have gone to  Mohanlal Sir asking him to let him direct  him in  another  film . “Only if you act with me; but let’s do something  fun,” Mohanlal The Great ,feeling the full weight of Markkar on his  shoulder, must have  said.

So, fun  it is. At least the  two actors  playing  a buddy-like father and son seem to be enjoying themselves  negotiating  the  smooth but brainless moves  of  the script that seems  to be inspired  by Amit Sharma’s  Badhaai Ho. Bro-Dad John announces to Bro-Son  Eesho that  he is going to  be a  father.

Appalled and scandalized Bro Eesho rants, “Before doing this,  you  should have thought of me.”

Bro-Daddy’s reaction: “Son, you want me to think about you when I am sleeping with  your mother?”

The  lines are designed to be  cool and  clever. This selfawareness  that runs through the  narrative like  a stubborn  virus(and we all know  about that) kills the impact of the humour completely. Admittedly both  the  main actors  are in  top form: Mohanlal and Prithviraj complement one  another  comfortably and  fluently.Regrettably   they are unable  to prevent the comedy from  sagging  at  all the wrong places.

The set-up is  way too self-congratulatory to  evoke  genuine laughs. Eesho’s Mommy gets pregnant  just when  Eesho’s girlfriend(Kalyani  Priyadarshan , spontaneous  and likeable) also gets pregnant. Before we can roll our eyes at  that  particular  twist of fate, there are  jokes by the  droves  about  ‘Eesho’(images of  Jesus Christ on  the  wall) .

Admittedly  the  first-hour communicates some  spark specially in the scenes  between Prithviraj and Kalyani which are surprisingly sprightly; surprisingly,  because there is  a larger age-difference between the romantic pair than between  Prithviraj and his screen-Dad Mohanlal. Both actors go to  great lengths to  justify their seeming closeness in age.

That is the  least  of the problems in this  off-kilter comedy that  derails  midway  to never really get back on track. In the second plodding half  character-actor  Lalu Alex as  Kalyani’s  father(the brunt of  a barrel of constipated  constipation  jokes)  gets incommensurate  footage .In the climactic  confrontation , Lalu takes centre stage  while  Mohanlal and Prithiviraj stand listening to him  like a paid audience at a political rally.

It’s like inviting Amitabh  and Abhishek Bachchan  to  a party where Shakti Kapoor is the centre  of attraction. Bro Daddy may have worked better  if it was 45 minutes shorter, and if it hadn’t tried to be  so cool.

Female A Listers With No Misters….Will Ranbir, Vicky Kaushal Sportingly Step In To Jee Le Zara?

“I wish I could approach the happiest  moment of my life with more positivity,” Aditya Narayan On Parenthood During The Pandemic