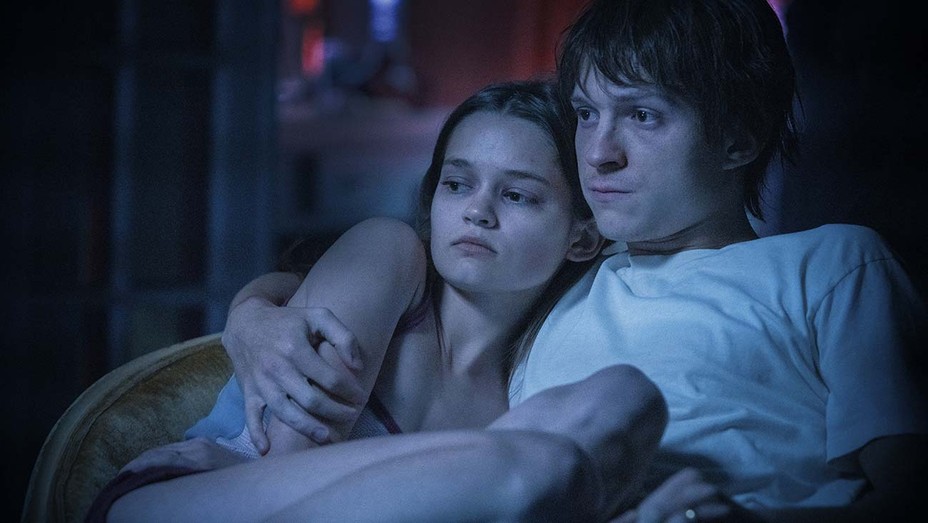 This darkest-of-dark films based on a true  story  makes you wonder why  we are expected  to invest two hours  of  our  time in  being miserable  along with the  film’s protagonist.

Tom Holland  whom we know  and  love as Spiderman, plays what must rank as   the unhappiest hero of American cinema.  In most of the film  Holland has to act drugged, zapped out and  disoriented. I must say he has  done a splendid job of it. Holland is consistently unhappy.

His  misery is contagious.  I wanted  out  in 15 minutes. But  I can never abandon a film. It’s like  throwing  a baby  into the sea knowing  it can’t swim. This is  exactly what Holland’s   character Cherry conveys.  A  man  who can’t swim , left to  drown.When we  meet Cherry initially he is  robbing a  bank. His heart  is  clearly not in it. He  allows  the female teller  to tell the cops on him. There will be many more bank robberies in the  2-hour-plus  playing time. This is what drug addicts do  to fund  their  obsession.

Then  the  film goes into a long-winded  flashback showing Cherry enlisting  into  the American army because his  girlfriend Emily(Ciaro Bravo)  refuses to marry him. She  , poor thing, regrets her decision right away . But it’s too late. The rest  of her time in this feelbad film is  dedicated to staying in a drugged haze with her  boyfriend  who comes back from the army all messed up  in his head.

Be warned. This film is likely to do the same  to your head. It is stylishly hallucinogenic  and we  perpetually see the world as  Cherry  sees  it: through a  drug-induced haze. The  narration is  deliberately languorous  with  the story unfolding in  chapters  like  a book. This must be in  deference  to  the  film’s literary  antecedents.Cherry is based on the  book by a soldier-turned-junkie Nico  Walker. The film seems faithful to the book but shows  little respect for any institution  or  individual.

War  is  shown as  institutionalized  murder.Drugs and robbing banks are  supposedly  the  antidote to  psychological  disorder.  It’s not only  the film’s morality that  needs to be severely questioned. It’s also its timing.  At  a  time  when we are  devastated  by  crises,  do we need cinema to celebrate sociopathic bleakness?

The  only reason to watch Cherry is  Tom Holland who surrenders to the part with single-minded ferocity. All else is lost in  the trashy  world of  the  protagonist.There is  no way  out. Towards the  end there is an endless shot of  Cherry sitting  on the sidewalk  with a  bullet injury waiting for the  cops to arrive.I felt  the same anxiety  all through the  film. Waiting for some hope in the  environment of unimitigated  darkness. It never comes.