Chutzpah Review: It Weaves A Web Of  Distortion & Deceit
Advertisement 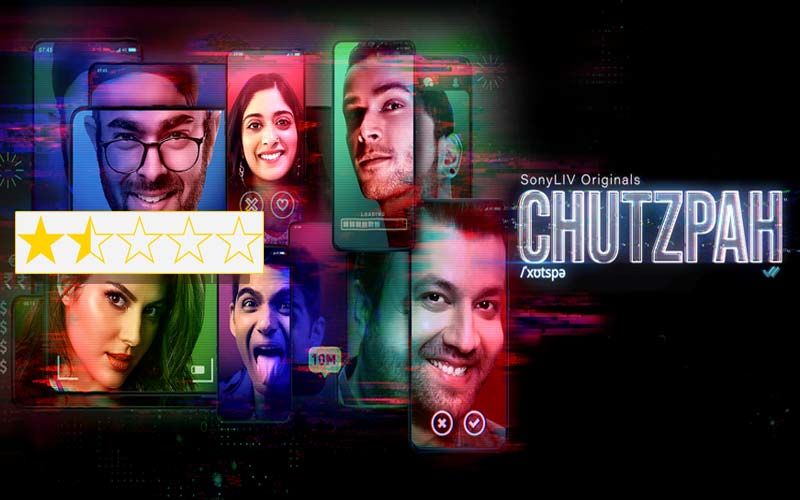 Chutzpah Review: After  wading through the slush of pseudo-porn and  other web-induced  perversities I  still  don’t  know  why  this  sickeningly self-flagellating  series is called Chutzpah. Were they thinking of Chutiyapa? There is  more of  the  latter on display than the former in the  presentation. The series sets out to mock youngsters  who  sit on their phones and computers  all day  searching for sexual fun .Instead  it ends up mocking its own  ambitions.

That seems ap(p)t. But timing is  not everything,  specially since no one  here is  actually having any sex on or off camera. In  a  way that’s  a blessing. The  very idea  of  Varun Sharma  or  Manjot Singh making out on camera is  intimidating. This is  a semi-vegetarian take  on male social mediatists and their  amorous antics that   border on the juvenile.

Having no  knowledge of how  online hook-ups work, I will take  Manjot’s version  of  it  to be the  gasping  truth. Manjot is indeed  a  good actor. Though typecast  in timid roles, as Rishi in this series he  nonetheless shoots his blank bullets at his  web fantasy code-named   Wild Butterfly (Elnaaz Norouzi) with  a  fair flair for humour  with an underlining  veneer  of  sadness.

Varun Sharma , on  the  other hands drums  up his  habitual drama  of  drollery. He  is a Boston based  NRI  in a long-distance  relationship with his girlfriend back in India Shikha(Tania Maniktala, also seen  in  Feels Like Ishq this week).  Like the  series , the Varun–Shikha  relationship doesn’t seem  to be  going anywhere. Attempts to spruce  up the  comatose relationship with  humour involving a monstrously misconceived  app, falls flat.

The  series leaves us with a  flat taste  in the mouth . The kind you feel  when Mummyji makes lauki  three days  in  a row and insists  you enjoy it since she  spent  so much time cooking it. I am sure the Chutzpah team  worked hard.  But  they seem  clueless on  what they  hope to  achieve.

The  relationships  in  the  plot are  listless  , aimless and worse  of all, pointless. There  is   some  semblance of  life  in  a young  influencer  Deepali Mahajan  trying to bring together her unreal life  on the social media with the  reality of the world that she actually inhabits. But this  plot point comes  too late  and  too  cursorily.

The main characters such as  Kevin(Gautam Mehra who behaves  like  a  Spiderman on speed) and  Prateek(Kshitij Chauhan) whose  aggressively cultivated  image  of the womanizer comes crashing down, crowd and complicate  the  narration unnecessarily.

The series tries to  be non-judgmental  about the  perverse follies of  the  internet  generations but  ends up looking  indifferent  rather  than  impartial.This is  a  series  about sex-obsessed  youngsters with no  sex, no charm, no wit  and no purpose  of existence .