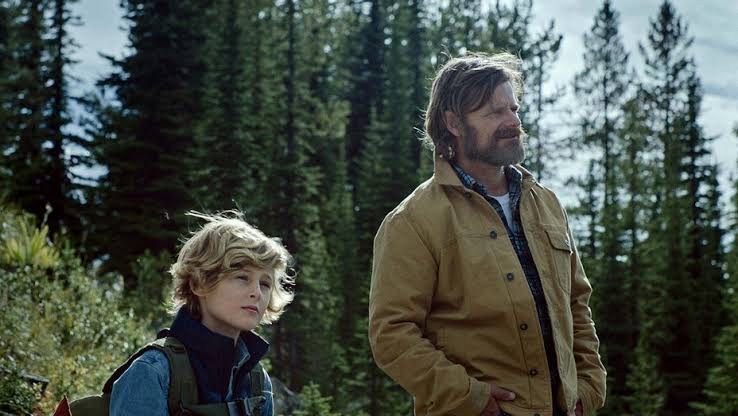 Just about the bravest thing you will see in this  well-meaning honest misfire is 10-year old real-life transgender Sasha Knight playing  the gender-confounded Joe in what seems  like  a reverse rom-com to the recent Palmer where  a 10year old boy  wanted to play with Barbie dolls. In  Cowboys  Joe is  a girl but wants to play with GI Joes( Joe, get it?).

Mother Sally(Jillian Bell) wakes up one morning to  find Joe gone. Joe has taken off with his delinquent Daddy  whom we   gather, is  not emotionally stable.  Troy(Steve Zahn) is on medication which he neglects  and  ends up acting as hyper as  a cat a hot tinroof. Of course  there are no tinroofs in Cowboys, hot or otherwise. Most of thefilm is  shot in scenic Montana  and  the cinematography(by John Wakayama Carey) is truly breathtaking.

But  the  film struck me as being  emotionally dried  out. It could have been such a  gut-wrenching story of a renegade father  trying to catch up with a daughter whom he accepts as  the son he/she  wants  to be. The father-daughter bonding in the mountainous magnificence lacks the  sensitivity and expansiveness that we  expected. Every  encounter between Troy and Joe seems incomplete, hurried and sketchy. As  though the  director didn’t want to be with them too long and would rather let them sort out their own  problems.

Mom Sally has her own problems with her husband whom she has flushed out of her  system  but cannot  stop from being a father to their child. It’s an intrinsically complex  situation rendered disappointingly denuded  of depth and layering. Yes, the surface glimmers. But that’s just about.What lies underneath is a sorrowful emptiness.Perhaps sensing a certain dryness in the  tone, the director introduces an aging world-weary but dedicated  female  cop(played with feeling  by Annn Dowd) who must hunt down the  fugitive father and his  daughter who is  not  agreeable to being a daughter, and papa is okay with it.

All of this makes interesting viewing. But nothing that would make you jump out of  your seat. The  sentimental finale could be seen coming from miles away. Steve Zahn seems invested in his hyper-dad’s role.  But he has  little support   from the screenplay which piles on the clichés on the father until he looks like Jon Voigt in The Champ dealing with a  a very special child.

To design this film as a cowboy western  is a good idea.  But the galloping horse leaves us  with no  food for ‘trot’.