Despite Irrfan's Superlative Performance Doob Is A Selfconsciously Arty Bore 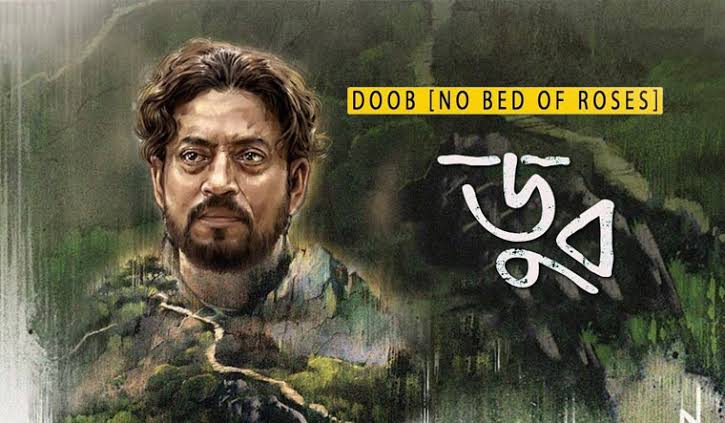 Doob No Bed Of Roses (Netflix)

This  is    a 2017   Indo-Bangladesh  co-production , an arid yet somehow  dissatisfying look at a crumbling marriage set  within  the Bangladesh film industry. The  film is  afflicted by a sense  of intellectual self-importance . The camera is  selfconsciously erudite. The language is stylishly laconic. It’s the  kind of cinema that is born  more  out of vanity than passion.

While Irrfan’s character ,a  filmmaker named  Javed Hassan, goes through his demoniacal struggle that finally kills him as he watches his  life and family come part, I  could see Irrfan grappling far more successfully with his  character’s complexities and emerging a winner.

This is an actor who never fails  a film, although the film, for whatever reason, may finally  let him down. I found Doob: No Bed  Of Roses to be way too closely inspired  by Guru Dutt’s  Kagaz Ke Phool.Also the whole  idea of a 50-year old  filmmakers throwing his reputation marriage and  family away for a fling with a  friend of  the filmmaker’s daughter required a lot more compassion and empathy than the  director is able to muster.

But Irrfan’s faith in out-of-box characters  remains unshaken.  He not only acted in  Doob he also agreed to co-produce it.Just like he co-produced Ritesh Batra’s The Lunchbox which worked a  lot better globally than Doob.

In  this disappointing(yet, I repeat, intriguing) Indo-Bangladesh co-production directed by Mostofa Sarwar Faroki   Irrfan has spoken his own Bengali lines.

Irrfan was rightly proud  of  what he had done in Doob. “It’s my first Bengali film,hence special. And yes, I’ve spoken my  own Bangla lines. I must say it was a challenge  because  the Bengalis are very  particular about how their language is spoken. One  wrong pronunciation and  you’re doomed.I play  man who  has an affair with his  daughter’s friend. It’s something I’ve never attempted before,hence  interesting.It is always a pleasure to be part  of an international project.I hope the  film is noticed in India.”

The West reacted with lavish praise for Irrfan’s performance  in Doob.India remained  cold to its wry exposition on  infidelity.

Irrfan never stops  being hopeful about the endless  possibilities  open to actors and filmmakers  in Indian cinema.

During our last  conversation he excitedly observed,   “What I like about current filmmaking trends  in India is the diversity. There are so many  kinds of films  being made. Of course the big-ticket  blockbusters will always  dominate  the  boxoffice. But other  kinds  of  films are also getting an audience.”

Heera Mandi Has No Kartik Aryan