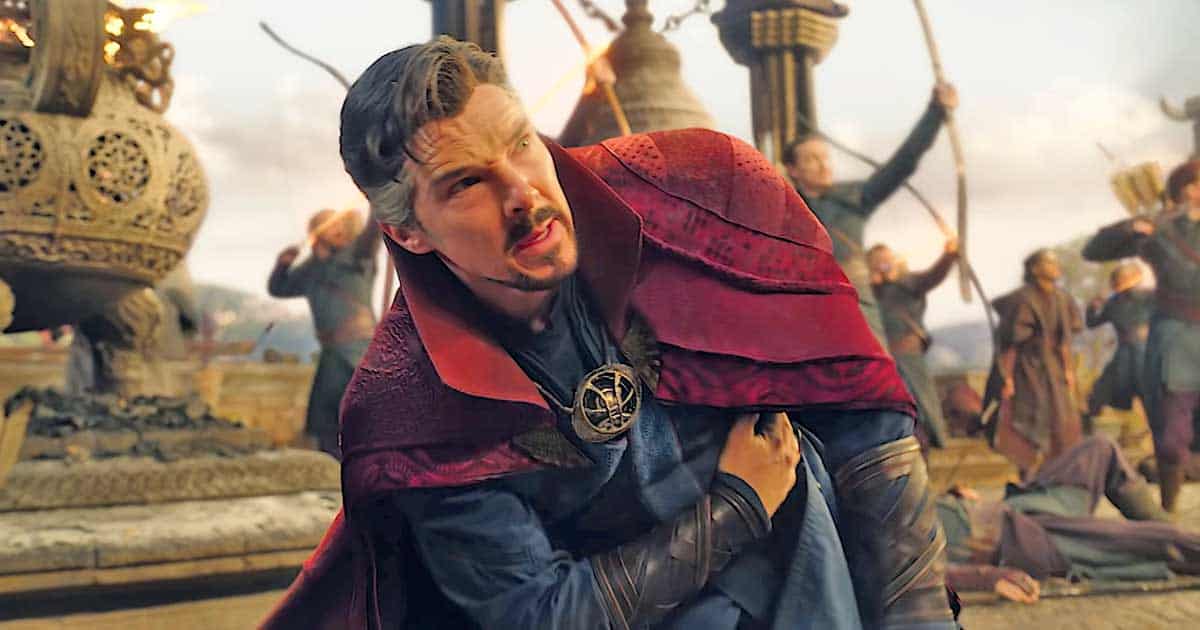 It is hard to say all the things that  devoted  fans of the Marvel universe want to hear about these super-hero films. If the truth  be told, a large part  of their epic excursions are buoyed  by plots with deliberate  unnecessary compilations. They  have little control over the  universe that  they  construct with the  raw material of an unstoppered rambling periphrastic imagination.

Not much  of the  unnecessary complications in  Doctor Strange In The Multiverse Of Madness  made sense to me. It’s  not meant to. We are supposed to simply accept and  imbibe the ‘Strange’ complications and  astronomical tangles, as  that wonderful actor Benedict Cumberbatch  attempts to pull us into his dreary fairytale. It doesn’t always work, though the  mindboggling screenplay(by Michael Waldron)  doesn’t ways let us down either.Let’s  just say, this one has its moments.

The  very first action sequence when Stephen Strange(yes, that’s his name) while attending a wedding(his ex-es’wedding, if you must know) jumps from the corridor on the crowded street of New York to  save the world from a  colourful  monster , is  hugely  impressive. There aren’t too many such spectacular  episodes in the  fitful narrative  which is  more remarkable for what  it tries to achieve than what it actually does.

At  its  core,  the plot of Doctor Strange In The Multiverse Of Madness is a  Mother’s Day  souvenir wrapped around reams of  ricocheting mayhem and  vertiginous special effects which dare  you look down. The abyss that separates  the spectacle  from nullity is concealed  in the  sheer gusto and  vigour that every frame secretes.

Unlike other super-hero  films  Doctor Strange In The Multiverse Of Madness is  a strangely calm creature entering and exiting  different universes through portals that are denied to ordinary mortals. Technically  this segment  of the  Franchise treads on  solid ground. Its  view of  meta-verses is  impressively  energetic. This time the  super-villain is  a woman Wanda played by Elizabeth Olsen who tries her best to inject emotions into what’s predominantly a high-end fantasy ride.

Olsen  plays  a  woman who has invented her own imaginary paradise with two  little children  in an alternate  universe.  She wants to destroy  America….no, not what  you think. America played by  Xochitl Gomez(don’t  try  practising that name  at  home without guidance) is  a teenager who hangs around Dr Strange. He calls her  ‘Kid’  so that nobody gets  any funny ideas.

Doctor Strange In The Multiverse Of Madness is  not a great film nor does it boast  of  spectacular visuals beyond a  point. But it seems to believe in its  own  galactic mumbjumbo . And that makes it  bearable even in its own selfindulgent  moments.