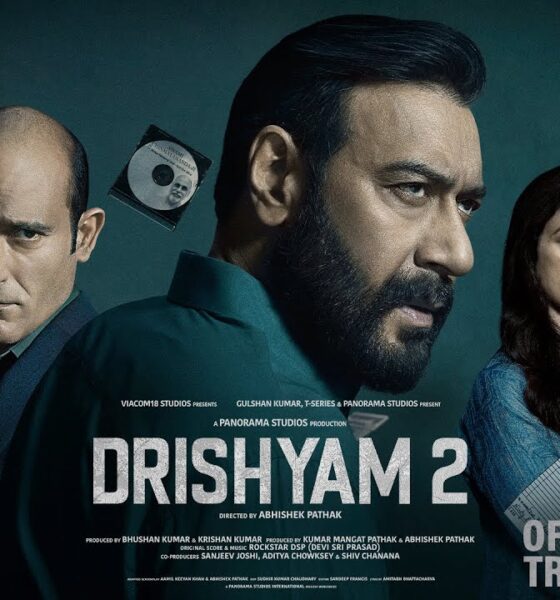 For those who have seen the original Malayalam  film, Drishyam  2  still has some  surprises to offer. Abhishek  Pathak  who had  earlier directed a  film on the  bald(Udta Chaman)  goes  this time for  the bold: his  telling of  a tale  of a murky murder cover-up, already told to perfection in Malayalam(or so, fans  of the original think) is  fluent and exploratory.

There are  many  top-shots  of  cars  and buildings that make the  people  and their manoeuvres seem like  a puppet show. For, at the  end  of the day  that’s what we all are, right? Puppets.  Except  the devious ones, like our workingclass  hero  Vijay Salgaonkar(George Kutty in the  original) who  can actually  outsmart destiny…or  so it seems, going by  the first two segments of the Franchise.  There is  a third  film on the way. Who knows, destiny and the law may catch up with him  then!

Until then we  have Devgn’s  deviously   street-smart  Vijay Salgaonkar protecting his wife(Shriya Sara) and two daughters  from the law-enforcers played by Tabu , Akshaye   Khanna  and  Kamlesh Sawant. The  opposition is formidable.Some of the actors playing the  khaki brigade are a big disappointment  .

What  holds the  film together, as a remake  and as fresh adaptation , is Ajay Devgn who  looks every bit like  a concerned  householder, not willing to give  away  any secrets  even  to his nearest and dearest ones  , as he knows better than anyone else that even walls   have ears.

Evenly-placed and designed to keep audiences invested  , regardless of whether  you have seen the original or not, Drishyam  2  has a solid  timeless  suspense  story  to tell. Solid, because  every  father  would always want to protect  his family  from the evil eye. Timeless, because  this  common-man superhero’s  mind games  to outwit the law are  a manual for  self-preservation.

Sudhir K Chaudhary’s cinematography captures  the mystery of  ordinariness with  vigour. Sandeep Francis’ editing could have been tighter: one  lengthy sequence where senior  cop Akshaye Khanna barges  uninvited  into  Devgn’s  home  in his  absence is  ridiculously  selfimportant.

Watch out for Saurabh Shukla as  a producer and  script writer.You never  know whose side he  is  on. The hallmark of  a truly dedicated suspense  character.

Saif Ali Khan’s Son To Be Launched by Karan Johar