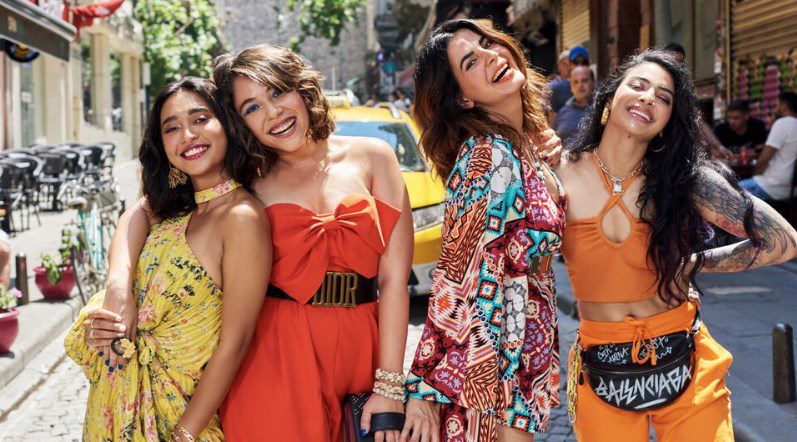 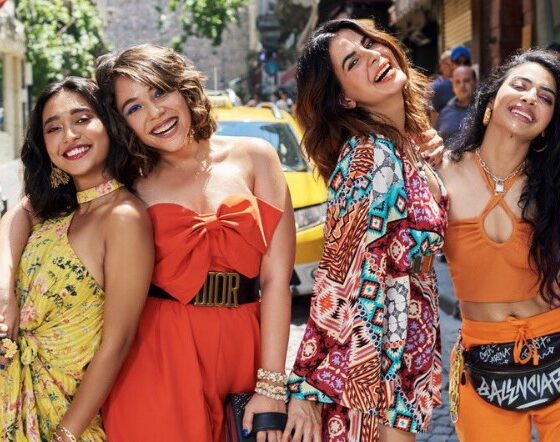 Four More Shots Please…Bring It On!

Unalloyed  fun… the sassy quartet is back with a  bang. Many bangs, actually, considering the predominance of carnal  activities. No harm in that. Anjana(Kirti Kulhari), Siddhi(Maanvi Gagroo),  Umang(Bani J) and  Damini(Sayani  Gupta) have  a healthy  appetite for the  good things in life,  including sex.They are  not apologetic  about their hedonism, or  afraid to fall flat on their face when their heels  can’t balance their drinks.

What  to do? Sometimes, no , make that  very often times,  things don’t go according to plan. Of the four  characters  Siddhi is  the most  adroitly etched. She is a rich spoilt brat and she  makes no bones about it.There is a  marginally captivating subplot about Siddhi’s lately-widowed mother and her…errrr… golden vagina. Every  middle aged  man in the neighbourhood wants to  woo her.And her  golden spot.

Here we see a bit of  an exaggeration.  Four More Shots, Please  doesn’t shy away from overstatement.  Its beauty lies in the eyes of  be-older: the older  these sassy  strong  vulnerable  and real women get, the  more they bring out  their  inner world  out in the open voluntarily.

Umang’s lesbianism remains problematic. Her  conservative Sikh father rejects it.And why should he  not , when she  is  seen  smooching her sister-in-law on  the  rooftop(a good way to avoid the scandal hitting the roof). There is  an  interesting encounter between  Umang and   a boorish cop who doesn’t know what ‘lesbian’ means.

Luckily  for the  viewer, the  pacing of the ten-episode  is brisk if not crisp throughout. The writing is clearly on the ball. Full marks  to series creator Rangita Pritish Nandy, writer Devika Bhagat, dialogue writer Ishita Moitra and director Joyeeta Patpatia  for  investing so keenly into the  characters . Besides the  four protagonists,the rest of  the casting also remains nearly impeccable. This season there are  interesting additional  actors  like Shilpa Shukla,Rohan Mehra, Jim Sarbh and  Sushant Singh  playing  actors  who  most certainly add to the  enticing patina.

The  tone is deliciously elitist: posh hotels are  the favourite shooting spot. This doesn’t take  away from the show’s connectible joie de  vivre. Constantly showing the middle finger to  conventions Four More Shots, Please remains  a  game-changing show, for allowing four saucy sassy  sexy women the freedom to  do  what they like.

And face the consequences.

“This Season of Four More Shots Feels Like a bigger show, a better show, a deeper show”