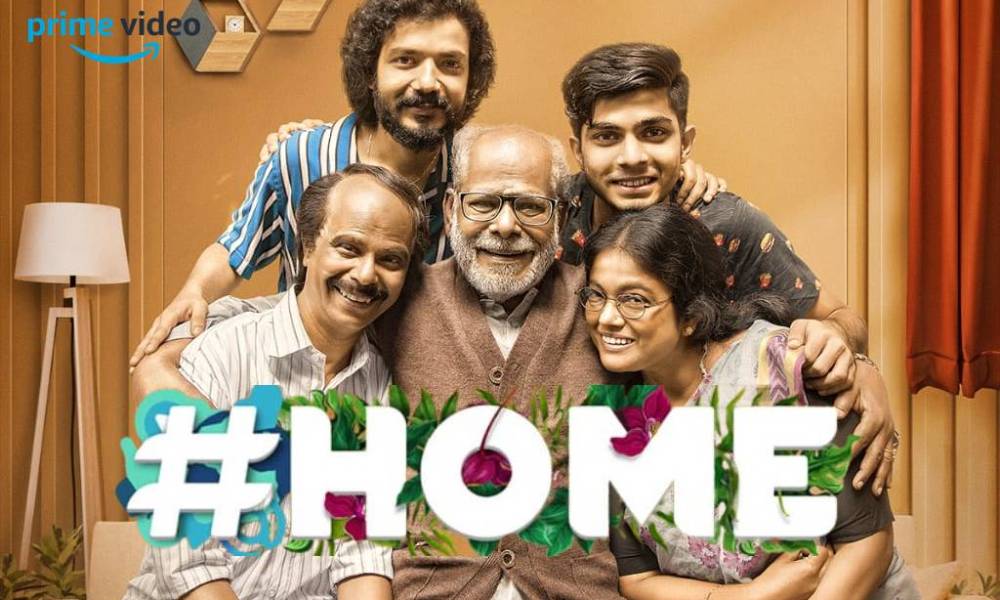 #Home Review: There is  so much that is  wrong and yet  so much that is strong, in #Home, writer-director  Rojin Thomas’  heartwarming eccentric but  deeply  humane film about  a family of fractured relationships  and how it, the family, finally finds its centre.

Nothing new here, thank God for that! It is the comfort of the familiar that makes  this artless  cannily  connectible  family saga, so winsome  and  appreciable.  #Home is  baggily structured with loose ends sticking  out of  the final product like  limbs out  of  clumsily-tailored  suit. But that, I soon realized,is the innate charm  of this majestically  askew  family drama which is utterly devoid of an even pacing  or any sense bearing.

Some portions trot along fine , while other  chapters  heave and groan to a staccato  momentum making the entire proceeding look unmapped, unplanned.  In the beginning we meet the protagonist Oliver Twist—yes that’s his name because, we eventually find out, his  father used to peruse a  lot of  English literature  during his heydays—is struggling with a sense  of self, trying to find  some ways to  make himself feel  useful to family and self after  his video-library  business  turned defunct.

For  actor Indrans  this is not  uncharted territory.  Just a  few weeks  ago I saw him playing a  father  pining for his son’s attention in  Velukkakka Oppu  Kaa in a rigorously rural  realm.  Here  it’s the pitiless heartless city, and the  addictive  cellphone dividing father  from son.

Sreenath Basi as  Oliver’s elder son Anthony communicates  the   benign contempt  of an impatient son with  a wonderful economy of words and expressions. Indrans  and  Basi play against one another with  intuitive  suppleness.I wish  the  narrative  focused  on the father-son pair trying to repair their relationship instead of  running helter-skelter  introducing us to irrelevant  characters, like  Anthony’s  girlfriend’s uncle Justin,who just drops in to the plot  for no rhyme  or reason and makes  himself at home.

Writer-director Rojin Thomas seems eager to latch  a  legion of  characters  on  Oliver Twist’s  life(by the way , he had a sister named Mary Poppins who passed away, we are told in passing).Some of the  baggage   is borne with grace  by the  unwieldy  plot. Others, like  a lengthy  languorous  completely pointless interlude  with  a psychologist  and a rather  bitter-sweet run in with a movie star(Dev Mohan) just doesn’t fit in.  The  biggest  pace-breaker is when  Oliver goes to the psychologist  for insomnia. But the  encounter  is somnolent , and should be  edited  out of  an otherwise-remarkable film.

What works wonderfully are the scenes  of domestic stress. Oliver trying to get his beloved son’s attention, his face  lighting up when the son looks at him…Oliver  offering unsolicited gyan to the son, taking  direct insults  from the boy…It’s  the price a parent pays for  caring  for his child.

At the climax, an extraordinary incident  from Oliver’s  adolescence returns to haunt the  plot.It is an outrageous co-incidence , and one that would normally have reduced the impact and merit of the film drastically. But #Home is  very special film. It earns itself some major concessions  from cinematic   protocol. We  forgive the sluggish  loose-limbed  pace because, well, life’s like that. It doesn’t follow any  specific rhythm and  movement. Most of the time we are nursing small splinters of our broken heart.Just like Oliver Twist,  the  original “Dil maange more” guy. Porridge  or providence, we are always searching for something more than  what destiny  doles out. Just like  Oliver in #Home.

The film is littered with believable  performances, though I found  Manju Pillai as Oliver Twist’s wife  a little too over the  top. What the Dickens!

OTT Series You May Have Missed