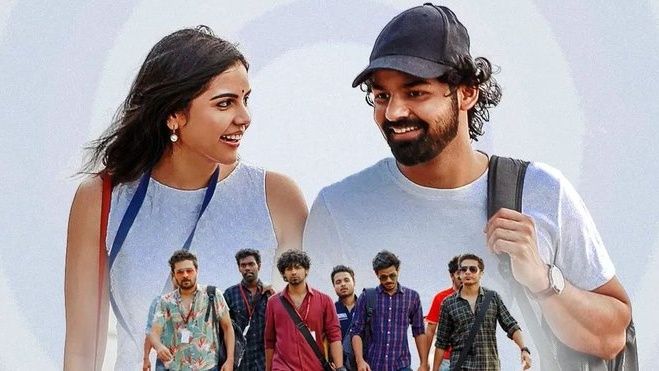 Director
Vineeth Sreenivasan
Writers
Arun Alat,Guna Balasubramanian,Vineeth Sreenivasan
Cast
Pranav Mohanlal,Darshana Rajendran,Kalyani Priyadarshan
Hridayam Plot
Arun and Darshana are first-year engineering students and they fall in love soon after their college begins. And just as how things work generally in teenage, the road ahead isn’t too easy for them. Life offers many twists and turns that they least expect.

Hridayam Movie Review: Look at the strange ways  that irony works. Although there are at least 45  prominent and  peripheral characters  in  writer-director Vineeth Sreenivasan’s  6th directorial venture, Hridayam is really about just three people and a messianic  figure who changes their lives.

Selva played by a relatively unknown actor  Kalesh Ramanand, is  the centrifugal  force that  manoeuvres  the  plot and its protagonist to a equipoised  closure. Selva is a young enthusiastic  innocent reformist. He  educates and feeds migrant students,coaches into the success zone in their classroom,and  plays the  role of a guardian angel.And yes, he in love with  girl who  irons clothes on the street. A pressing engagement, so  to speak.

The  light  is partially extinguished  from this brightly-lit sunny film after Selvi is gone. No wonder Arun(Pranav Mohanlal, son of  the legendary Mohanlal) names his son Selvi at the end.  This  film is not about Selvi. It’s about Arun, a  migrant  from Kerala studying in an  engineering college in  Chennai, facing all the  curves and dips,highs that  lows, of  a migrant  student,  giving nothing away  of his inner self-doubts  and questionings (this dead-pan-ness  suits Pranav Mohanlal).

At one point in this  rugged  handsome love triangle (actually it  is as irresponsible to  call    it  a love triangle  as to call  Devdas  a love  triangle)  Arun changes colours, becomes the college ruffian, a  portable version of Arjun Reddy,so to  ‘spit’. Happily,Arun  soon tires of this aggressive phase  and  the  screenplay  brings Arun back on the rails  without tomtomming its  virtues from a high moral ground.

No one is a hero here.  The film judges no one. Darshana’s  jealous rage at her  lifelong love Arun’s wedding venue(where a  piping-hot  clothes iron pops up as a  potentially ruinous  weapon) is one of the most vulnerable  moments of lost-love I’ve seen in Indian cinema.

Indeed   Hridayam follows  the  rhythm and  idiom  of  the heart closely. But there is  a pronounced intellectual  faculty  underlining the growth  of  Arun from bucolic to brash to  honest and finally, perhaps a little  wise too.

Outwardly  this may seem to be yet another coming-of-age rom-com .But  there is a lot more at work here than meets the eye. What  lies underneath is  what propels the  film to  the level of a greatness  that many may think it hasn’t earned. But that’s only an illusion.Vineet Srineevasan  uses personal intimate  memories  to  underline  Arun’s maturation. The mix of memories  and  moments  from the here-and-now mesh in a pastiche  of pain and  release.

I specially  liked the ‘Selva’  episode ; no offence  to the actor who  plays the  messianic   character. But it needed someone with an iconic image. Pranav Mohanlal in the lead  gives a leashed  performance .His  limited range is never  allowed to surface to challenge his dominance in the  script . The two actresses who form  his love interest Darshana Rajendran and  Kalyani Priyadarshan are far more in control of their craft bringing to their lovelorn  characters a refreshing individuality that scoffs at their stereotypical  placement  in  the plot.

Come  to think of it, that is true  of  the film as a whole. It  seems like  yet another film about growing up. But it is  not only the  curly haired hero  who’s grown up at the end. From Farhan Akhtar’s Dil Chahta Hai to  Hridayam, the coming-of-age genre  in Indian cinema   has also matured.

Related Topics:featuredHridayamHridayam news
Up Next

The Telephone Sequence In Gangubai Kathiawadi Was Improvised, Inspired by Shabana