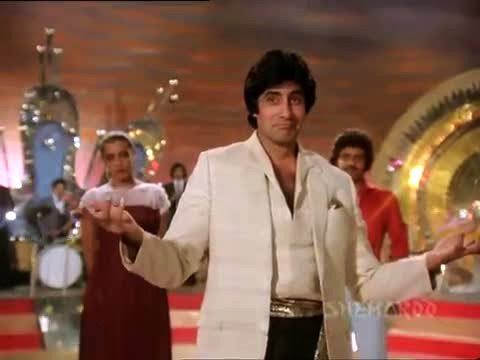 Everyone is  talking about Amitabh  Bachchan  turning  music composer with the  racy Badumba track  in the film 102 Not Out.

However the ever-enterprising Mr  B  caught me by surprise  by confessing that Badumba  was not the first song he had composed.

Reveals the  Big B, “I have been composing several songs in the past too . In my  1981  film Kaalia(directed  by Tinnu Anand), the song Jahan teri yeh nazar hai meri jaan  mujhe khabar hai was given by me to Pancham(composer R D Burman) .Then  Baghbaan had several of my compositions. Baabul too… I sang for Nishabd , did the Hanumaan Chalisa with my late  much-missed friend  composer Aadesh Shrivastava.”

Though Mr Bachchan dismisses  his  singing and compositional abilities he  reveals big musical plans.  “My  compositions are of no singing value .I am quite hopeless .However I am in the process of doing some of my father(poet Harivansh Rai Bachchan)’s works and that is being designed for a platform  to be  released  soon.I have already sung some verses from my father’s  poetic work Madhushala where Adesh Shrivastava  did the musical arrangement. I played it too to a wonderful ballet  presentation on my 70th birthday .More is being composed and developed and hopefully should be out presently .I am also remixing some of my other songs giving it my own musical interpretation .Let’s see how it goes.”

About the  song he composed in 102 Not Out  Mr B reveals, “Badumba Zumba Zumba was an afterthought by me .During the last day of the shooting on an open balcony it started raining and we just broke for a while to run to  a shade.That is when I told Umeshji(director Umesh Shukla) we need to have a song for the film, because music is an attraction these days for films .Ours being and an old-age home kind of film, I felt it would enhance the positioning of the film.
However  the director didn’t quite agree with  Mr B. “Umeshji said there was no space for a song. I said . ‘Ok, let me compose something and play it for you and then you decide.’ So I went into a studio, composed the song, arranged a rough music to it and sang it .When Umeshji heard it they all liked it, but because there was no space in the film we decided to use it as a promotional song.Subsequently now it is in the film.”

Mr Bachchan brushes  off his musical journey. “There is no journey .It’s a wild ride off-track and off-note .Nothing special about it .I am no composer .Just an impromptu habit that I  have.”