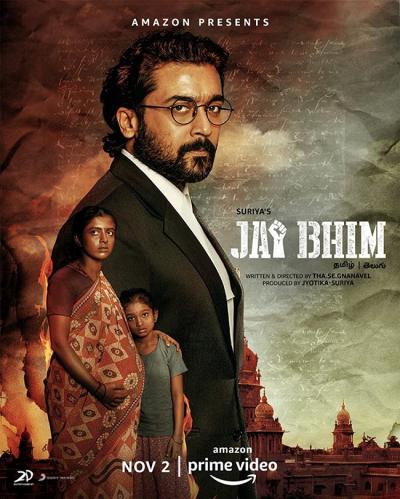 Suriya-starrer ‘Jai Bhim’ which released on Prime Video got fans kicked as there is palpable excitement about the film. The film  cater to a broad set of audiences across demographics as it’s set to release in Tamil, Telugu, Hindi, Kannada and Malayalam. Headlined by Suriya, ‘Jai Bhim’ is a thought-provoking story inspired by real-life incidents based on the life of popular advocate and judge – Justice Chandru. It talks about how the judge went beyond the call of duty to serve justice.

Now news is that Film is leaked on torrent Websites making its producers to bask in the popularity of the film. It is reported that Jai Bhim got leaked and pirated on websites like MovieRulz, 9X Movies etc.

The leak of films released on OTT platforms and theatres have indeed become a subject of worry for the makers and directors. Well, Jai Bhim is not the first film to be leaked online.

Earlier, films like Kasada Thapara, Yennanga Sir Unga Sattam, Anabelle Sethupathi, Jagame Thandhiram and even Suriya’s production ventures like Udanpirappe and RARA were also leaked on these platforms. Let us tell you that Jai Bhim marks the leading man’s second film to release on an OTT platform (in fact, the same platform) after Soorarai Pottru.

There is no greater misfortune than poverty. To be poor in India means something entirely different from what it means in first-world countries. Those below the poverty line in India are a  non-existent mass of near-extinct  drifters…homeless, foodless, no sense of self at all.

And yes, there is the police brutality. If you are poor(and therefore disempowered) the cops can pick you up at any time, huddle you in their van, shove you into lockup and shove protrusions into unmentionable places in your body mind and soul.

Jai Bhim, the chant of the followers of the champion of the downtrodden Baba Ambedkar which  in present day context of socio-economic disparity, has even more relevance that what it had 20 or 30 years ago, is a relevant  work, lacking in nuance but never short of genuine feeling.

This loud but hard hitting film on poverty and police brutality is set in the 1987 and based on a real-life incident where an innocent man from the destitute Irula tribe in Tamil Nadu was taken into custody and beaten to death. The survivalist narrative, punctuated by cries of anguish and whoops of  triumph, is a terrific star-vehicle for Suriya who steps in 30 minutes into the plot, to play the heroic lawyer Chandru who, we are told, habitually  fights cases for the downtrodden.

Suriya is most comfortable in the messianic role imbibing his compassionate character with an unreasonably steep amount of empathy. I guess a society based on monstrous discrimination does need Chandru to stand up for the voiceless. But in reality, how many such messiahs come forward  to rescue the powerless multitude?

Here is where Jai Bhim takes a nosedive into fantasy. It portrays the activist-lawyer as a wand waver, weaving his magic through a complex and murky labyrinth of legalese, bringing the wrongdoers to heel. It’s all done for claps.

There is a powerful sequence towards the end where Sengenni(Rajisha Vijayan) whose tribal husband  Rajakannu(K Manikandan) has disappeared  from police custody, is summoned by the police commissioner to brief her on why an out-of-court settlement is advisable. Sengenni tearfully asks the officer what she would tell her unborn child. “That I took money to exonerate your father’s killer to educate you in a good school?” And she walks off.

In real life Sengenni  would not even get that monetary compensation and the wrongdoers would go home to their families. The melodramatic tone of the narration puts Jai Bhim far behind Vetrimaaran’s Tamil Visaranai(in which every whack of the police danda fell like a thunderball) and that other powerful Tamil film on police brutality Karnan.

Jai Bhim deliberately chooses a more aggressive  tone and a broader narrative structure. At 2 hours and 42 minutes the film overstays its welcome by at least half an hour. But till the end we care  about what happens  to Senggeni, and never mind the  actress’ smeared  dark skin-tone which keeps fluctuating in colour.