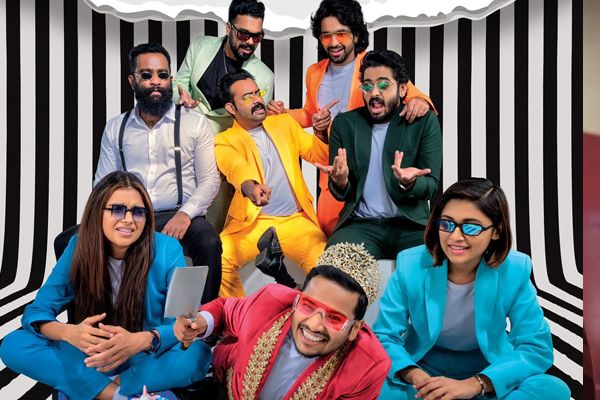 Jan.E.Man Review: This is  the craziest most adorable film of the year. Or for  that matter , any year. Basil Joseph who directed the supe-hero  spectacle  Minnal Murali to  skyhigh  glory, comes down to earth with a thundering thud. He  exchanges  hats to face the camera this time. Basil plays Joymon a loser  in Canada  freezing to death in the chill of friendless solitude .Even his mother  doesn’t have  time or patience to talk to him when he calls her.

So what does this loser do? He  takes the first flight home to Kochi as  he doesn’t want to spend  his birthday with his  college  friends(who  by the way have either forgotten him or would like to forget him).What  happens thereafter as   Joymon lands in Kochi  has to be seen to be believed. And  after  seeing the  wild zigzagging twists and turns  in the plot I was unable to believe that this little  miracle  of  a movie was  actually happening.

Joymon and his two  reluctant  friends Sambath(Arjun Ashokan) and Dr Faizal(Ganapathi S Poduval)  head to  Sambath’s home where the entire family(reluctantly) joins in the  birthday party  for a man  they hardly know or like.Joymon’s myopic  selfinterest  takes a solid thashing when the house opposite his  party-venue has a sudden  death in  the family.

As the  beareaved go into a  deep morning Joyomon insists on his  balloons and candles and music,  while the dead man pregnant daughter  wails  in the  darkness , and  to hell with the sensitivities  of  the grieving neighbours.

The  eccentric  screenplay weaves in and out of the two  homes  facing one  another in  a seamless  fusion of frivolous fun and  serious  grief. The  chaotic  landscape is  somehow never over-painted. Characters come  and  go but never  crowd  the  scenario. Each character  is memorable, my most favourite being the selfappointed  security guard of  a man into illicit activities.

While  Basil  Joseph’s Joyon is  a classic  study of  intellectual and emotional   imperviousness, my favourite characters are Monichan(Balu Verghese), the estranged son of the  deceased patriarch  in the house opposite, who  has the film’s most heartbreaking meltdown scene. Monichon’s sister has  taken  to sisterhood(a nun) while his closest friend is  a lout who is constantly creating a rift between Monichon and his family.

The  tiniest  of  cameos is  painted in  bold  striking strokes. There are no big and small characters  in Jan.E.Man. They are all what they are:  people  caught in the heads-and-tails  whirlpool of partying and mourning,not aware where the one ends and the  other begins.

Admittedly there are slivers in the  plot where I felt the writer-director was piling it on too thick .The quest for a  climax  gets too  selfconscious. Birthing a  baby  in the  chaos is a cliché  this  innovative comedy could have  avoided.But the larger picture makes the smaller follies  eminently  excusable. Jan.E.Man is  huge fun without resorting to  gimmicks or stunts. It is  a film of  amiable anarchy. The world of family chaos has never been more scattered

Embrace the chaos  and you are in for a  whale of a time.

After The Failure Of Saaho, Prabhas Goes All-Out To Woo The  Hindi Belt With  Radhe Shyam