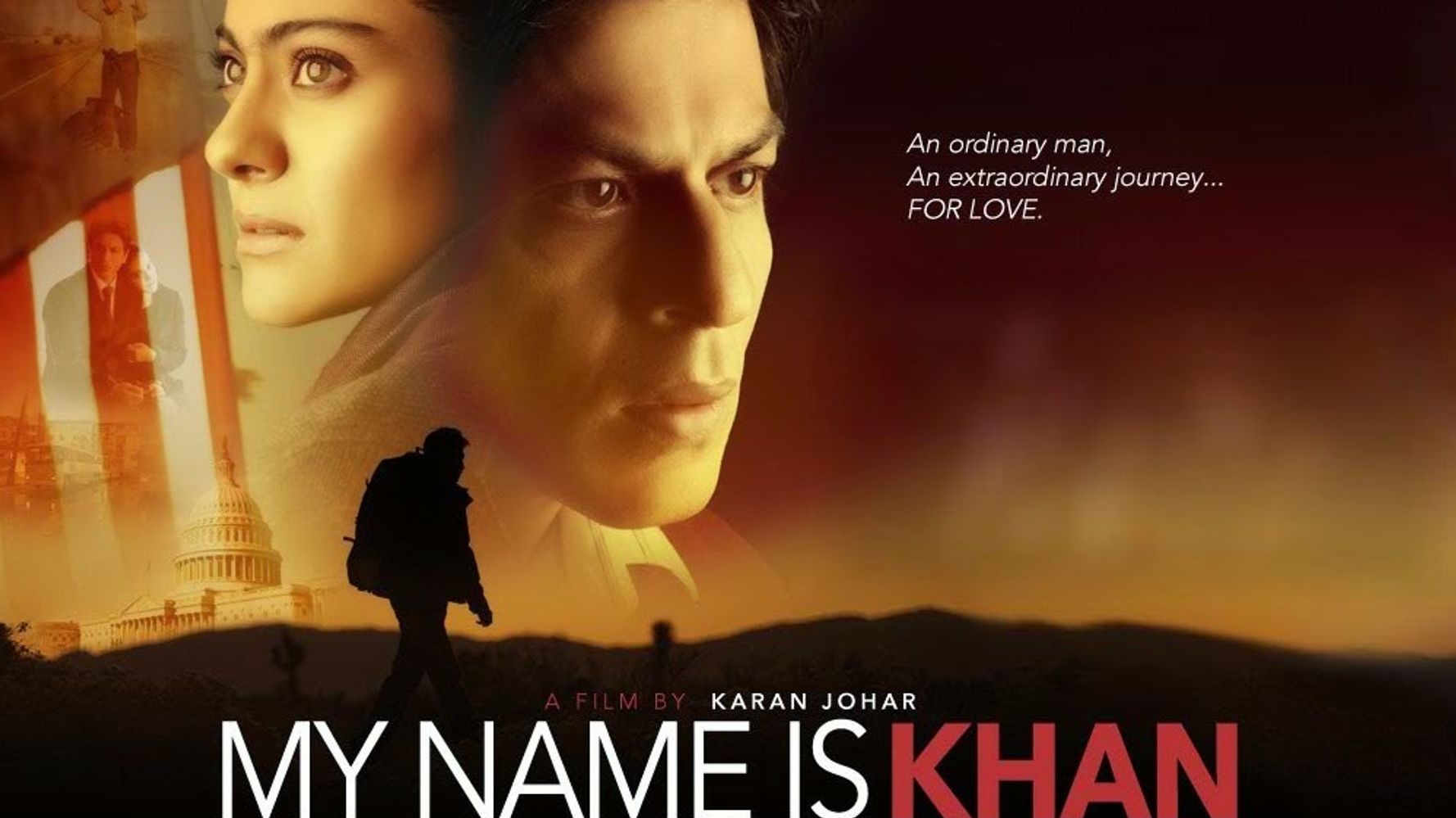 He repairs almost anything, including irreparably damaged  relationships . But this  film about damaged lives  needs no repairing.  My Name Is Khan is an almost-flawless work, as perfect  in  content, tone and treatment as  any  film can get  .

The ‘message’ of humanism  doesn’t  comes across in long pedantic  speeches . The film’s longest monologue has  our  damaged  but  exceptionally coherent  hero Rizwan telling a  congregation  of Black American church-goers  about his dead son  .

And if that moment  moves  us   to tears it’s because the emotions are neither manipulative nor flamboyant.It  isn’t because Rizwan’s  son Sameer   perished in  a racial attack. It isn’t even because  Shah Rukh Khan delivers his life’s best performance in that moment of reckoning. Rizwan’s  heartfelt  rhetorics are not about  changing the world with words. Born with  a physical disability this   is  a man on  the move. And boy, does he move!

In  what is possibly the most touching testament on film  to the spirit of world peace  and  humanism(lofty ideals to achieve in the massy-masala format but see how  pitch-perfect Johar gets it) Rizwan  takes off on a picaresque  journey to meet  the US President  with  a message that  initially strikes  us  as being too naïve  for  reiteration.

But look closer. Some of  life’s  basic values have been  lost in  recent times. Writer Shibani Bathija’s  seamless  screenplay, arguably the best piece of writing since Rakeysh Mehra’s Rang De Basanti, recovers  that  long-lost   message of  loving your fellow humanbeing unconditionally without getting trite around the edges.

Sex and politics  have nothing to do with  it. It’s okay to hug your neighbour.

First and foremost My  Name Is Khan is a wonderful story told with  a flair and flourish  that leave  a lingering impact on the viewer. Almost every  frame is  composed with  a mix of mind and  heart creating an irresistible progression of  moments so tender and forcible  we’re simply  swept away   in the tides of  the  tale about   a  very special man  who undertakes a  very special journey.

My Names Is Khan opens with  Rizwan  boarding an American flight being frisked after a suspicious co-passenger hears him chanting religious passages. Before we begin to suspect  this to be one more  film on the persecution of  the  innocent Muslim, Karan Johar   doing a  smart and  slick spin away from his trademark content and style, takes  his  hero on a  journey that crosses several emotional,political and geographical borders before stopping with breathless integrity   to  say, life doesn’t go on…it  changes  colours and textures with  the moral values that the individual chooses to  confer  on the  life given to him.

Superbly scripted by Bathija with pithy outstanding dialogues  by Niranjan Iyenger, the film is  edited by Deepa Bhatia with  just that  much  amount of time allotted to the character’s and their  thought processes to make them appear warm humane and  tangible without  over-punctuating their presence.

Karan Johar always  a master of overstatement,  for once holds back. The silences in My Name Is Khan often speak far more eloquently  than the spoken words.The relationships that the inarticulate  Rizwan forms during the course of  his  life from child to  husband to  father  to a political  individual  are contoured  with a  luminous lack  of laboriousness.Whether it’s young Rizwan (played  sensitively by  Tanay Cheda)  and his mother (Zarina Wahab, memorable in her brief appearance) or much later, Rizvan and his step-son(brilliant young discovery  Yuvaan Makar)  the traditional relationships are done-up in  striking but  subtle shades.We look at every moment in the film(even the clumsily-done flood sequences) as special because they are part of  vision that goes far beyond the real of hop-in-hop-out entertainment.

The director swerves out of  his comfort zone without  the sound of screechy wheels . Karan Johar’s unconventional take  on modern marital mores  in Kabhi Alvida Na Kehna faltered  due to over-statement . In Khan he doesn’t try  hard. The characters and their  predicament as America gets increasingly  suspicious and hostile  about the Muslim presence,  are  portrayed   with a lightness of  touch that lights up almost every sequence.

Then there is Kajol to provide the kind of natural light to every frame that no amount of artificial light can  supplement. As Rizwan’s  Hindu wife Mandira with a smart intelligent son she has  a distinctly secondary role to Shah Rukh Khan.  She leaves a lasting impact as a divorcee  and later  an angry wife and grieving mother, as only Kajol can .

The  scenes  of courtship between Mandira and  Rizwan  work  so beautifully because  of the  exceptional chemistry between the two actors. More than a strong political statement and moving message of peace My Name Is A Khan is a love story of a man who  can’t  express his  love through words, only deeds. This is a film that Frank Capra would’ve made if he had lived  long enough to see 9/11 happen.

The narration is  carpeted with virtues, both invisible and  visible. Ravi K Chandran’s cinematography  captures the incandescent soul of the pure-hearted protagonist as effectively as   the stubbornly unbroken spirit of unknown  passersby  on  the  streets of America.

Rizwan, we are told, is  petrified   of the   yellow colour.The offending colour recurs with just a hint of insistence. Rizwan  wears shocking pink  because he hears Mandira’s buddy(Navneet Nishan) say it suits her. He  proposes  marriage and sex(in that order) at the most inopportune moments. He suggests  Mandira have her dinner when she’s traumatized by grief. He wears his dead son’s shoes  as he takes off  to meet the President.Rizwan moves by his clock. But his tale is timeless.

Shah Rukh Khan doesn’t PLAY  Rizwan. He becomes one with the character’s subconscious, portraying the man and his spirit with  strokes of  an invisible paintbrush until what we see is what we cannot forget. Undoubtedly   this is   Shah Rukh’s  best performance ever.

This  is no ordinary hero. And My Name Is Khan is no  ordinary film. Long after  the  wary-of-physical-touch  Rizwan has finally shaken hands with President Obama, long after the heat and dust of racial and communal hatred has settled down  the core of humanism that  the film secretes  stays with  you.Yes, we  finally know what  they mean  by a feelgood  film.

Speaking  On  Shah  Rukh Khan’s  nuanced rousing  performance in  My Name  Is  Khan,  Karan  Johar had  said  to me, “He  did monumental  research  on his autistic  character in My Name Is Khan.  I was zapped by how much he  knew on the subject.  And he brought all the knowledge on  the sets without any strain. He had written reams  of notes  on  how  he  wanted to  interpret his character. And   to him  it  was  no big deal.  He’s ready  to  direct   a film any time.  He will be outstanding at  it. His understanding of human nature and emotions can never be matched  by me.I feel two  hardworking talented  people are bound to form a productive  team. When these two people share a special familial  camaraderie  there’s bound to be very valuable  emotions between them, and those emotions are bound  to  translate on  screen. Shah Rukh and I  work  so well together because we care so deeply for each other in real life. Creativity compounded with brotherly love  cannot go wrong.  If you ask me, I’m happy piggybacking on his stardom. There can never be an ego between us . I know only too well that he’s successful  way beyond what I can ever be  . Stars don’t get any bigger than Shah Rukh Khan or  Amitabh Bachchan. Once a filmmaker accepts that the ego never  comes in the way. I’m happy with the success  God has given me. And I’m happy God has given me Shah Rukh to attain that success. There’re certain stars who  glow much more brightly than others. That’s why they’re called superstars.Shah Rukh has been  integral  to  my cinema from Kuch Kuch Hota Hai  to My Name Is Khan On a personal  level he is family , friend and that elder brother I never had. Shah Rukh and I feel we’ve made a  film  we can be proud  of. It’s the most uncorrupted uncompromised and honest film we’ve made. My Name Is  Khan wasn’t easy. It’s  the  socio-political  journey  of   Shah Rukh’s character Rizwan  from the age of  4 to  40. In his journey  Shah Rukh encounters  major  political upheavals  from   a communal riot in India to  9/11 in the US. But  my film  is  not about  any specific  political event. Nor  is it about  the Asperger’s Syndrome.My  hero is autistic. He  couldn’t be  neuro-typical because he had to see life with a  direct honesty and  clarity denied to normal people. MNIK is  a super-hero  film where  the  hero’s power  is the power of humanity.

Like my movie said, ‘We’ve  to be stronger than our fears, greater than  our limits   and more than just a name.’ More power to  the force of  humanity. I just believe we as Indians are such a strong force. We underestimate  ourselves. There’s much power in  the power of unity. …I was  dealing  with a subject  which had  a very strong message and with  a  character who wasn’t neuro-typical. The character of Rizwan(Shah Rukh Khan) had  to be portrayed very sensitively. If you  notice we  never made  the character’s autism  the  issue. The problem is not his  autism but the quality   of human beings we are. There’s an irony  running through the  film. You and I  who are normal are cluttered and confused in our heads. And  Rizwan sees  life in black and white . Though he suffers from  a medical condition he has an aspirational  mind. And  he takes us back to our roots to what he learnt as a child from his teacher and from his mother about there being  good people and  bad people. You can’t get any more simplistic.  He knows no better. But I see Rizwan’s good-bad theory as  a   great comment on the  divisive forces that try to divide us on the basis   of religion, politics and  communal. If we followed  Rizwan’s guidelines as prescribed by his mother we’d possibly  have a better world.For  me the most favourite cinematic emotion  is  the triumph of  the human spirit. If a film inspires you  to  better your life, you’ve succeeded as  a  director.”

“My Most Challenging Role,” Says Ajay Devgan On His  Digital Debut On 5 March