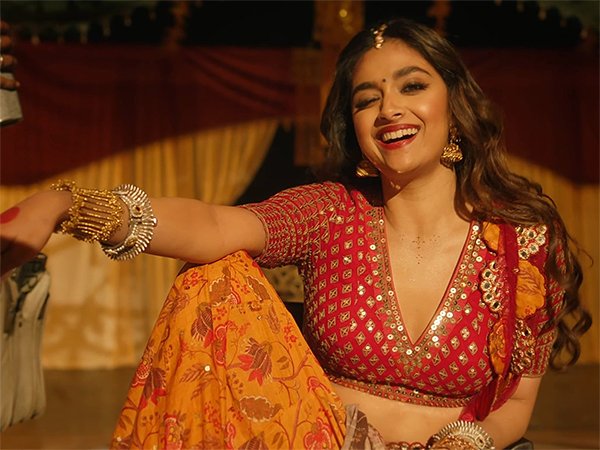 The  Fabulous Tamil-Telugu Actress Keerthy Suresh Delivers A  Powerhouse Performance In Saani Kaayidham, an Amazon Prime Video Original Where She Plays A Disempowered  Woman Out To Wreak Vengeance On Her Wrongdoers. Keerthy Speaks  to Subhash K Jha About The  Challenges In Playing The Difficult Role.

Saani Kaayidham is a complete departure from everything you have done so far. What made you choose this?

It’s different in every way because I’ve not done a genre like this. It’s a first for me, making it a very exciting project. The character is very raw and rooted. I was very kicked when the script was first presented to me. The director  Arun Matheswaran’s narration instantly made my jaw-drop and there was no question of me not taking this challenge.

Saani Kaayidham sees you playing a very angry character. Since you seem sweet tempered in real, was that hard to do?

I was always seen as the girl-next-door who is bubbly and charming. But my character Ponni is very unique. It’s quite different from what I have portrayed on screen before. I was quite impressed by the unexpected scenario, and unpredictability that the script and character brought to the table. Ponni is brave despite the adversaries she has to face. I was certain that with after Saani Kaayidham, audiences will see me in a new light.

How do you manage to be so prolific? How do you assess your career so far? Is there anything you would like to change if you had the opportunity?

As an actor I don’t chase any particular genre or story. I tend to seek out roles that appeal to me and would in essence work great for the overall story. I like to do all kinds of roles that challenge me whilst also ensuring that it helps me enhance my skills. Any film should be a learning experience, hence I am open to new arenas where I can explore concepts that I have never attempted. I have been very fortunate to have had incredible experiences of working with some of the industries finest directors and crews, which also enabled me to better my craft, so I have no regrets; only gratitude.

You have had to perform some seriously violent sequences. How much did they affect you personally and how hard was it for you to leave Ponni behind?

I think that everything that I did was new, everything was challenging. Ponni is not a criminal, instead she is someone who just does  what she  has to due to the adversities that have occurred in her life as the story progresses. So I had to keep that in mind.

It’s not something I relate to, so I didn’t attach myself to it completely. Nevertheless, I enjoyed every bit of it. I believed in Arun’s massive vision. It was beyond my thinking and I was so pumped every day to play such an intriguing character.

How did you bring yourself close to your disempowered character? What are your thoughts on the gender and caste biases that your character has to go through?

I don’t think I had to disempower her. Ponni’s lean and mean. She’s bold and through the course of the story becomes fearless and rugged. We have in fact tried to achieve this through the raw and rugged look which took me barely 20-30 mins to get into the character’s skin. It was very important that the character fit in the surrounding that it was in, where she lives and her background.

Some have found the film’s violence to be over-the-top?

What she goes through, although a tad exaggerated, is rooted in some sort of realism. We cannot deny that gender and caste biases exist even in today’s time. It is fictional stories like Saani Kaayidham that throw  light on certain societal subjects that the audiences can take away from.

Are you emboldened and enthused to perform more characters which have a social relevance. How will you make them happen?

I have been receiving such wonderful messages for the film and my character. People are really enjoying watching this cinematic piece of work that Arun and all of us have put in our best of efforts on. For the time being, I just want to be thankful for all the love we are being showered with.  I don’t know about stories with social relevance, that depends entirely on what script I am being offered. But I definitely want to play characters that will resonate to the audiences on a personal level and touch them emotionally. I am further looking forward to more such opportunities that come my way, and I will take it up if I am confident  about the narrative.