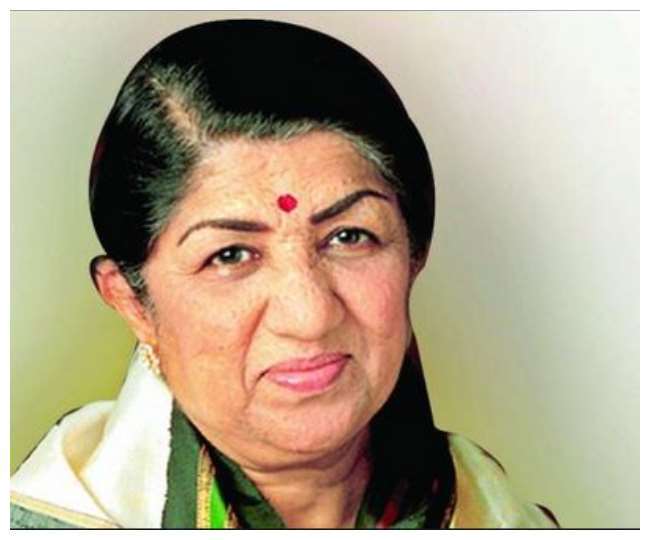 Lata Mangeshkar Is A Religion Beyond Saffron Or Green

I  had decided to not  write  an obituary on the Goddess Of All Melodious Things. Obituaries  are written  for the dead.  The Goddess cannot die. She will live through thousands  of  her songs  for as  long as civilization exists; which may not be very long, what with  many kinds  of viruses  and other toxic  elements  polluting and  poisoning our planet.

As long as  even one of her songs, mind you not the  thousands that she has rendered  to infinite  durability, but just one , only one… pick anyone…Raina  beeti jaye, Aaj socha toh  aansoon bhar aaye, Ae dilruba, Kitni dard  bhari yeh raat hai,  Abke  na  sawan  barse, Saawan  ke jhoole pade… Every one of these  songs is worth infinitely more than  the entire  body  of  songs sung by  every  other singer in the universe.

Those who talk about her  monopoly now when she is gone should  listen to the above songs. Ican send  you  a list of  200 songs of hers, each one  a consummate  selfcontained masterpiece on  a  par with Picasso’s Mona Lisa  or   the Kohinoor. I have heard  Main hoon teri prem deewani  mere saiyan mera raja diljani , an obscure   R D Burman composition from a potboiler  titled Azaad which  didn’t deserve  the  gem of a  song, at  least  500  times since  it was first released  in  1978: I  still don’t know how  has sung it, the  pauses she takes between the lines, the way she carries the notes from mid-wave to the highest octave within two lines: no singer in the world, not Tansen  not Bhimsen Joshi  not  Pavarotti can do this. She  is  beyond any human  explanation of  excellence.

I am  embarrassed to praise Her when She is  gone.I had vowed I wouldn’t  .  After a  lifetime of  deep  unconditional uninterrupted veneration I  had  decided to not join the chorus of  panegyrics  after  Her  going. But then  I saw  some deeply  cynical  writings where  she was  accused  of  going saffron after  singing for the Pandit Jawarlal Nehru. I heard  discordant  voices  questioning her political  allegiance.

Yes,  she  was very fond of our prime  minister Narendra Modiji. She has  on many occasions spoken to me about him  every warmly.  I  remember on her birthday  in 2019 when I called her in the morning to  wish her she  gently asked me to call later.  “Abhi Modiji ka phone aane wala hai.”  I couldn’t compete with that .

There was  mutual fondness between  the  two, that transcended  politics.Lataji’s Allah tero naam  Ishwar tero naam  was no empty rhetoric.  If she is being mourned in  Pakistan as  much as in India,  then it’s only because she  sang for mankind , not for the details  on the passport. The  Goddess’s  songs owed allegiance to neither saffron  nor  green . They  were a religion of  their own, a colour  so vibrant, deep, tapestried and  rich, it  had no human  definition.

Since this  morning  I saw “tributes” where the Goddess was  slyly accused of  “sabotaging” the careers  of singers like Vani Jairam , Hemlata, Preeti Sagar  and  Suman  Kalyanpur.With due  respects to these  singers, no singer   in this world  was competition  for Lataji . Because she  was  not of this world. We Lata bhakts believe she  was Saraswati Mata reincarnated. You  have a  problem  with  that? The liberals find that laughable?  Go ahead and laugh.Why do you think she left us on the  day of visarjan  after   Saraswati Puja? The day when the  Saraswati  Mata  was immersed is the day  Lataji departed.

I have not even  begun to  process her departure from this godforsaken  world. I can’t believe  I will never be  able to speak to her.  Do I  care for a  world which has  just been robbed of  the receptacle  of  all that  is beautiful and  desirable?

Rocket Boys: Homi Is Where The Heart Is