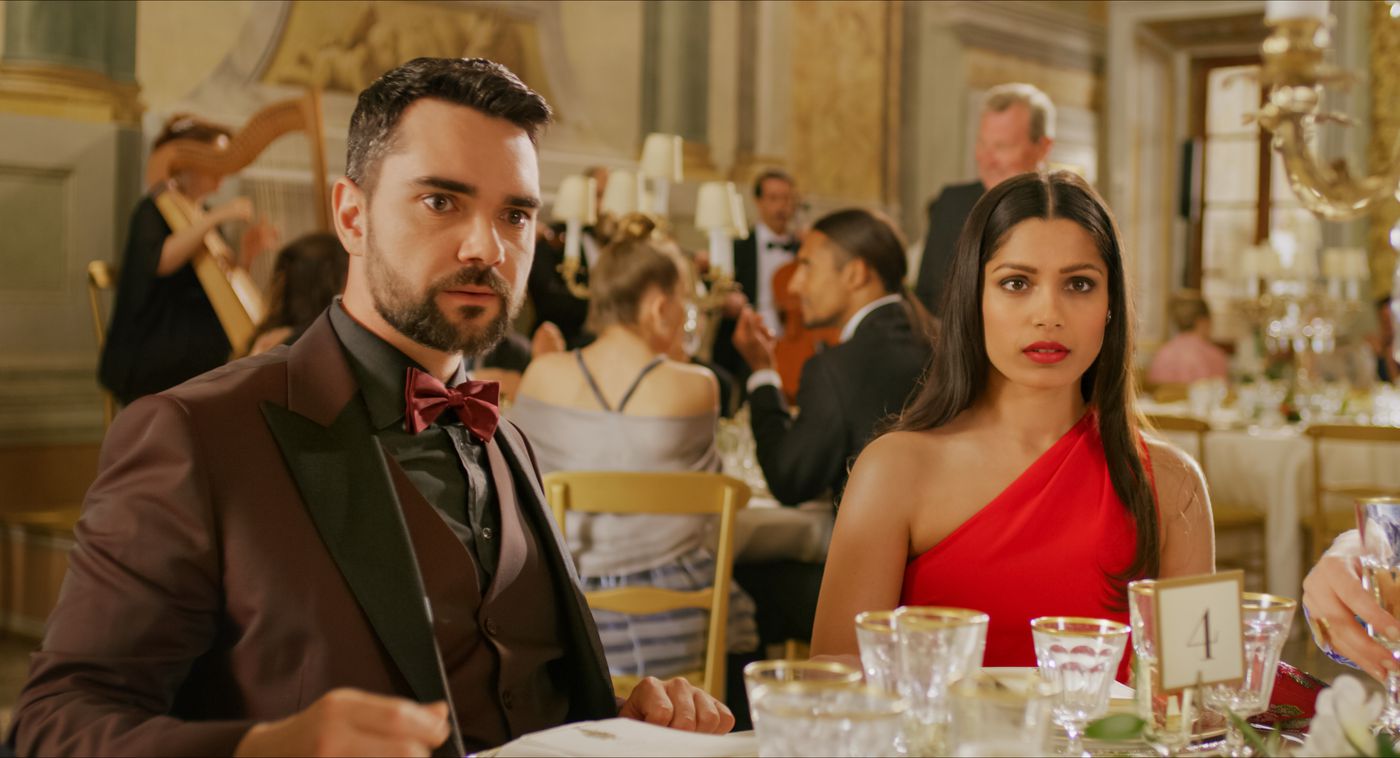 Don’t know  what you’ve heard. But nothing good has been said about the new Netflix feature film. Nothing good is  said about anything these days. It’s the sign of the times. And just looking at  so many characters together at a lavish wedding in Italy with  goodlooking people getting drunk and  making a  fool of themselves, reminds us of a time, not so long ago, when big fat weddings were a  prevalent phenomenon.

And  we were all  invited.  So welcome to this wedding where the pretty Hayley(Eleanor Tomlinson)  is  about to marry  her Italian  dream-man Roberto(Tiziano Capute)  as all  sorts  of   pickled, sozzled, disgruntled guests assemble in a castle-like wedding venue meant for a princess’wedding.

It’s all meant to be deceptively idyllic and glamorous .And we know  things will fall apart and  the  elegant  festivities  come undone in no time at all. The  problem with  Love Wedding Repeat is  not that  it’s  a bad film. Its problem is  a more intrinsic absence of pleasantness . The characters are uniformly unlikeable,  and none more so  than Freida Pinto playing a colour-blind stuckup bitch who treats her  new boyfriend like smelly trash and  at one point,  right in front of  the  guests, she  orders  him to stand away from her.For the record, he obeys.

Amanda(Pinto)’s boyfriend Chaz has a size-problem. He has been taunted into believing that his  sex organ is  far less  substantial than her  ex-boyfriend’s.  There is even a big scene created where Chaz confronts Amand’s ex-boy-friend about this  size thing.It’s a  ‘hugely’ embarrassing moment,and very   much in   character.

Everyone is  busy embarrassing the  hell out  of everyone , including themselves. Trying to  keep the sophisticated farce afloat is our dishevelled hero  Jack(Sam Claflin) the bride’s brother  who has eyes only for  Dina (Olivia  Munn) a war reporter whose tales of tragedy and loss are lost in the  melee of  mirthful festivity that  the  director whips up in two halves.

In  the first we see everything coming to a disastrous end.In the second-half we see  the wedding coming to a happy end.Everyone gets what he or she wants in the  end.And that includes Jack’s oddball best friend Bryan(Joel Fry) who at one point looks so sleepy that it becomes  impossible for him to  remain a  functional invitee as this  wired-out wedding.

I  am  happy to say things are  not so bad for us. We  pretty much stay awake  watching the  two-tiered hijinks . There  is a man at  the wedding in an uncomfortable kilt played  with superb  smugness  by  Tim Key, who keeps boring the hell out of  others. Watching him  one gets  a sense what this film feels about lavish weddings.

Nobody listens. Everybody talks.  There will always  be the party-poopers. Love Wedding Repeat  revels in the chaos of a wedding  gone wrong.It doesn’t quite achieve  the  blitheness of spirit that we expect. But it isn’t an ordeal  to watch the  wedding guests  trip over their champagne.