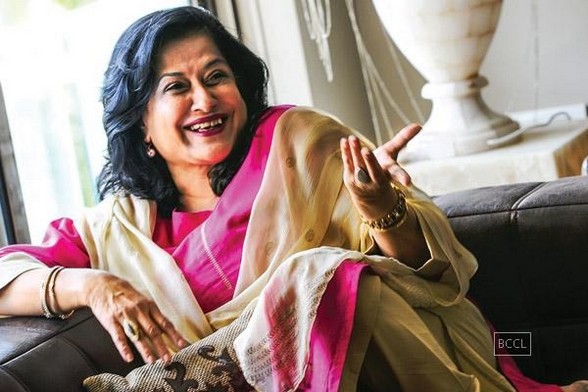 Moushumi Chatterjee who turned 74 on  April 26 is undoubtedly a beautiful woman who looks far younger than her age.It’s therefore baffling why Aparna Sen cast Moushumi as a 80-plus woman in  two back-to-back films.

Laughs Moushumi with girlish glee, “You will have to ask Aparna Sen  why I was cast as such old women in her films The Japanese Wife and Goynar Baksho.  But Irrfan Khan with whom I just worked in Shoojit Sircar’s Piku has an explanation.”

In a show of affectionate solidarity Irrfan loudly questioned Aprana for casting Moushumi as older women.

Says  the veteran actress, “The incident happened in front of the entire unit.So there’s nothing to hide.There was  a scene where I had to play badminton in Piku. I was reluctant.I told the unit that Bengalis are by nature laidback, and that they like indoor games like cards, ludo and carrom , preferably with a lot of cushions behind their back, ‘Iss age mein kahaan phansa rahe ho?’ I grumbled. Irrfan loudly screamed back, ‘What do you mean by age? Aparna casts you as old woman because she’s jealous of your beauty.’ In Aparna’s defence I must say she gave me a chance to prove my verstality. Both her films took me into a world that I didn’t know existed.”

She confesses The Japanese Wife came to her after going to other actresses.“Aparna asked Raakhee Gulzar and Sharmila Tagore before she asked me to do the role. At first I was reluctant since the character was so alien to me. But I am glad I did the role.It gave me a chance to be someone I had to discover from scratch.”

Irrfan Khan’s remark  was in all likelihood made in jest. But Irrfan seems to have fallen prey to Moushumi’s girlish beauty.

Moushumi got a lot of critical acclaim for her films directed by Aparna Sen. “People saw that Moushumi Chatterjee could play roles of women far older than her. I am thankful to Aparna Sen.I believe Aparna tried other actresses like Jaya Bachchan, Sharmila Tagore and Raakhee Gulzar for the role in The Japanese wife. But it was my destiny to do the role.

Looking  back  Moushumi feels gratitude and  joy at her career. “I always feel I’ve got more than I deserve. I was never career-driven. But circumstances were such that I got married and immediately started working. I balanced on the two boats of home-making and acting quite well. If I may say so myself. My family was not unhappy.I remember in the beginning of my career my father-in-law(the great composer-singer Hemant Kumar Mukherjee) was very supportive.Somehow I  managed.”

During her  heydays  Moushumi  was  known to be childlike.  There is a little girl in her  that remains intact to this day. “Raj Khosla with whom I did Kachche Dhaage and Daasi said that. I am childlike but not childish. Every person has a child within. You’ve to nurture that child, make sure it is healthy and it lives.I am blessed to remain childlike after so many years in this industry.That’s because God makes sure no injustice is done. If in spite of my determination to never compromise with my conscience I could still do quality work that can only mean God was on my side.At the end of the day I could sleep with a clear conscience.”

Stars like Rajesh Khanna were upset because Moushumi  didn’t pamper their ego. “I could never do that. Our industry has remained male-dominated.Even today it is the same. Forget about the entertainment  industry in every walk of life women have to deal with the male ego. Men behave either like a 6-year or a 60-year old.Some stars back then saw too much success too soon.They couldn’t handle the success.”

Ask her favourites, and Moushumi  doesn’t remember  all her films. “Sometimes I hear a song I like then my daughter tells me it is from my film.I like films like Anurag,Kachche Dhaage…down South I did some good films like Sawarg Nark and Swayamvar.Some films that didn’t click are my favourite, like Basu Chatterjee’s Us Paar.Then I did a good role in Basu Chatterjee’s Manzil which is to this day remembered for the song Rimjhim gire saawan.While working together again after so many years in Piku we remembered that song.Everyone comes with her own destiny. I was very lucky. I don’t know how I’ve lasted so long. I’ve no marketing team, no secretary. I never ask for roles. But they still come to me. It’s a miracle.I never pandered to anyone’s ego, made people angry because of my uncompromising attitude. No one can tell me what to do or not to do. Either you convince me. Or you get convinced by me.I like it when people who have wronged me realize their mistake.”

Moushumi’s  all-time favourite is Kajol. “And before her I like Tabu.And before these two I like Nutan and Durga Khote.”

Recalling her first  stint before the camera  in Tarun Majumdar’s   Ballika Badhu  Moushumi says, “I don’t see any contemporary heroine can play a 14-year old bride. When I did the film they had to pad me up.I used to get very annoyed by the saree. I was told when the director shouted pack-up I could take it off. I was such a  child that when the director said ‘Pack up’ I’d begin to throw off  the saree on the set. They had to drag me to the makeup room.Where would you find that innocence today?”

What is the secret of her youthful looks ?Laughs the actress, “I think positively and I don’t wish anyone ill.”