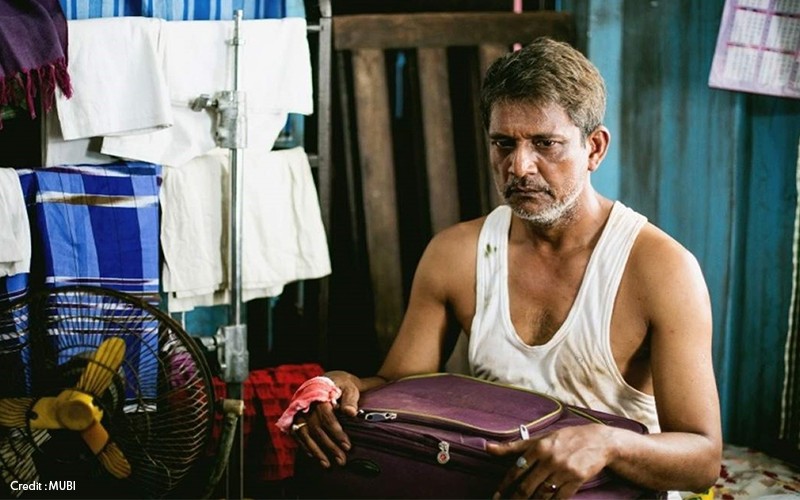 It  was  by chance  that I saw this  highly relevant . though a wee self consciously radical, short  film about a very troubled  family in Kolkata fighting inner and  outer demons. While this family  doesn’t seem particularly happy  on  its  own, the  communal tension outside—and we hear  angry religious chants and  rioting outside—makes it worse.

This is  11 minutes of unrelenting tension that clamps down on  our throats and  refuses  to let  go. We first see  the  lady of the house  with a horrible  wound on her  face(was  this  a communal injury or domestic violence?) poring  over the day’s  meal  in the kitchen. In other room her husband, deeply troubled and agitated is trying to  somehow  pack a  suitcase: where  does he want to escape to , considering the  roads are clogged with  communal malevolence?

And yet the  son is getting ready for school in  a stained uniform while his  grandfather  sits inert  suggesting a deathly calm before a looming storm.

While the performances, particularly Adil  Hussain who is  as usual, far more brilliant than the script  allows him to be, carry  this  angry enraged  bitter  film, I found the  dystopian  atmosphere way too selfconscious and   oppressive. The  absence  of dialogue makes  it even worse. Nobody speaks  for the length and  breath of  the  film. The only human  sound we hear  is the mother’s bloodcurdling screams at the end.  Her  pain suggests protest and acceptance. As far as this short film is concerned we are doomed by  fanaticism.

That , I  don’t agree with. But Meal is  laudable  for  the  performances,  praticularly Adil  Hussain whose eyes convey both fear and anger  at the same time.I am not too sure if the film conveys  a  commensurate clarity of  emotions.