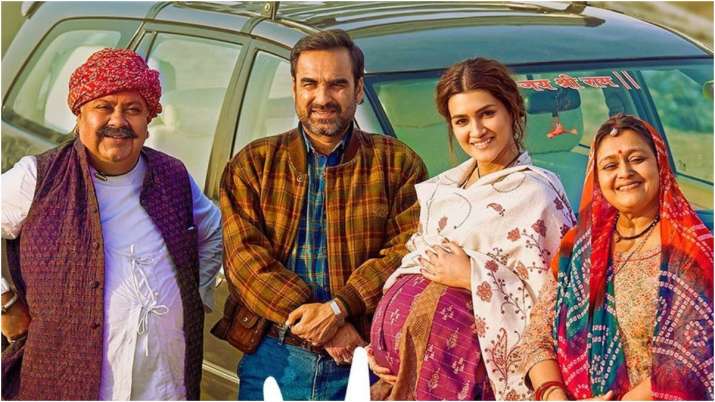 Mimi Review: Somewhere  in the middle of the paternity muddle created  by a screenplay that is smart and  savvy but not always logical, a doctor  played by Jaya Bhattacharya  looks straight at expectant mother Kriti Sanon and says, “Your  unborn child  will be born  disabled…He has Down Syndrome”.

Later  the  child is born perfectly normal. No one  thinks of taking legal action against this  abominably  ill-informed doctor . Instead  there is  the  child’s legal parents, an American couple who should be  denied visas the next time they decide to come to India to collect a baby, threatening  to take the child’s  biological mother to court.Pregnant pauses are alien to the world  created in this  entertaining  but  somewhat irksome dramedy.

But hang on. Mimi is  not as heavyhanded as  it seems  to be. It has its really blithe  moments where  Kriti Sanon, in a role written to make her shine,  plays  an ambitious Rajasthani  dancer who  wants to be  a Bollywood star,  and  has Ranveer Singh’s poster in her room .She also has Deepika  and Kareena’s pictures on the wall just to remind   herself  that once she gets to Bollywood those divas  are done  with.

Here  is an over-reacher from  the outback, flying  so high in the sky she can’t see the pigeon shit  hitting her  giddy head.Egged on by  a cocky driver Bhanu Pratap(Pankaj Tripathi, as priceless as  only he  can  be)  and driven by her greed to  make quick  bucks she settle for  surrogacy.Mimi decides  to become  surrogate  mother  to an American  couple(Evelyn  Edwards and  Aidan Whytock) who flee from the country, and their ambitions of parenthood, when the  female doc  announces the  child would  be  born “disabled”.

Could we please disable the word disabled when talking about children  born different  from normal? And since when  are doctors allowed  to make such hasty careless judgments?

The pre-pregnancy  portions underline  some gleeful moments where  Pankaj’s comic timing is no surprise, but Sanon’s  aptitude  at  creating humour is a surprise. I specially liked the sequence where Mimi’s best friend played by the  redoubtable Sai Tamhankar  looks at the American surrogate father  and sighs, “I’d sleep with him without being hired for surrogacy”.

The  film has  some  interesting ideas  on parenthood and the  woman’s right to her womb. But the  treatment  gets progressively  guillotined by excessive melodrama. The end-game  with  the  biological mother  battling it  out with the  American  couple who  hired her womb, seems like  a very oldfashioned  ‘Hey re kanhaiya kissko  kahega tu maiya’ situation,  created for  tears.The chuckles get a wrap on  the knuckles as  the drama kicks in like  a  baby kicking to  get out of the womb.

Truly the chuckles when they  are  allowed  to  be,   are  the life  and breath of Mimi. Bolstered  by Kriti Sanon and  Pankaj Tripathi’s  feisty performances the film  succeeds  in drawing us into its  far-from-logical  plot  and keeping us  engaged  even when the characters  start behaving as  if they had just seen Main  Tulsi  Tere Aangan Ki  in a  loop.

Mimi has  its flashes  of  brilliance, like Manoj Pahwa as Mimi’s father  hiding his grandson’s  toy in his  dhoti when the Americans threaten  to take  away the child. These firangis,I tell you

The  music and songs are  used  sparingly  .Rahman’s Rihaee de  and Kailash Kher’s  Choti si chiraiya  are  unusually  evocative in presentday context when music in  our films has become royally redundant.

Critic’s Comments and Rating
Renuka Vyahare of The Times of India gave 4 (out of 5) stars and said “Mimi picks a relevant topic and turns it into an engaging, empowering and compassionate tale on humanity and motherhood”.
Taran Adarsh, in his review for Bollywood Hungama, wrote “Mimi is a heartwarming saga, aimed at families and it will keep the audience thoroughly entertained. Had it released in cinemas, it had a good chance of becoming a success”, giving a rating of 3.5 stars out of five.
Umesh Punwani of Koimoi gave 4 out of 5 and said “Mimi is a delightful blend of humour and emotions”.
Sushri Sahu of Mashable India too gave 3.5 stars describing the film as an “feel-good family entertainer” and wrote, “Mimi is a family entertainer that might make you cry, laugh and smile all at the same time; If you’re into that, you will enjoy Mimi, which is enriched by Sanon and Tripathi’s performances”.
Calling Sanon’s performance in Mimi her career-best she further wrote, “Sanon has outdone herself. In fact, as you see her shoulder the film with her craft, you will also see her deliver her career best performance; Mimi is Sanon’s labour of love all the way”.
Anupama Chopra of Film Companion wrote “Mimi is content to operate at a simplistic, superficial level. Laxman puts together a roster of terrific actors, but Mimi rests on Kriti’s shoulders. She also works hard – putting on weight, working with a Rajasthani accent. In the climax, she is able to summon a wellspring of emotion but largely, her efforts are undermined by the script and her own inability to let go of synthetic Bollywood glamour.”
Stutee Ghosh of The Quint gave two out of five and wrote: “The conflict and its resolution is both predictable and laughable in equal measure. It’s sad that Mimi reduces its titular character to a stereotype that never feels authentic. It’s utterly filmy, so we know that no matter how contrived the plot is we must give in if we have any chance of being ‘entertained’.”
Jyoti Kanyal of India Today gave 2.5 (out of 5) and said “Mimi is a great attempt at bringing a social taboo like surrogacy to the centre stage. However, in trying to make it more entertaining and emotional, the makers lose a good opportunity. The film has some really funny scenes, and if melodrama is something you don’t mind, you should definitely give Mimi one watch.”
Shubhra Gupta of The Indian Express gave a one-and-a-half out of five-star rating saying “The film takes recourse to melodrama, what else, to resolve all its dilemmas. As tears flow, chests are beaten, minorities are othered, ‘fair’ complexions are remarked upon, and a wholly contrived end finishes up things.”
Anna M. M. Vetticad of Firstpost gave 1.5 (out of 5) saying “Writer-director Laxman Utekar’s new Hindi film is a muddled take on motherhood with clarity only on its conservative mission to condemn abortion. If it had been better written and directed, Mimi might have been considered dangerous anti-women propaganda. To describe it thus would be a compliment though to the director’s storytelling abilities.”
Related Topics:mimi bollywood moviemimi charactermimi movieMimi Movie Reviewmimi netflixmimi remakeMimi Reviewmimi storymimi trailer
Up Next