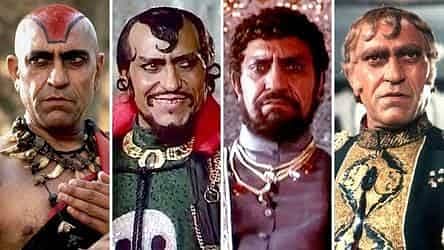 Amrish Puri died 16 years ago, leaving a legacy of 200 films in a 30-year career, during which he worked with avant-garde directors like ShyamBenegal and Govind Nihalani and also did outright kitsch.In his early years, most of the work he did was either quality-oriented work or mainstream commercial films where he used his powerful voice and screen presence to accentuate the cinematic definitions of evil. Puri’s truly fecund phase as Bollywood’s most dependable character-actor, or actor of character, began in 1992.

On his  birth anniversary on 22 June here’s a checklist of his best films.

“Nishant” (1975) – Playing the eldest brother in a family of cruel zamindars who abduct and rape a schoolteacher’s wife, Amrish Puri struck a note of immediate and everlasting terror in viewers’ hearts. Though the film had other terrific actors, it was Amrish who dominated the show in every way possible. The role had apparently been written for Bengali actor Utpal Dutt who excelled at playing obdurate disciplinarians. Amrish, too, went on to make a great impression on mainstream Hindi cinema as the unrelenting patriarch.

“Phool Aur Kaante” (1992) – Though this was the launch pad for Ajay Devgan, it was Amrish Puri who stole much of the debutant’s thunder as the good-natured don who wants to win his estranged son’s respect back. Amrish admitted this film was a turning point in his career.

“Muskurahat” (1992) – In the year that “Phool Aur Kante” brought grey glory into Amrish’s black persona, he also went out-and-out benign in this wonderfully heart warming story of a sullen old man and a young woman who brings a smile on his frowning face. In the two pivotal roles, Amrish and Revathi were outstandingly synchronised. Director Priyadarshan went on to cast Amrish in most of his Hindi films, including 2004’s “Hulchul” where the actor played an obdurate village leader who’ll go to any lengths to settle scores with his enemies.

“Viraasat” (1997) – When Priyadarshan was roped in to remake the Tamil blockbuster “Thevar Magan” who but Amrish Puri could play the benign zamindar, modelled on Marlon Brando in “The Godfather”? In the Tamil original it was the theatrical thespian Shivaji Ganesan who played the main role. Amrish modelled his performance on none. He was one of his kind.

“Mr India” (1987) – Screen villainy got a new face, and so did Amrish Puri’s career. Playing the comic book bad-guy Mogambo, Puri gave a new caricatural twist to celluloid villainy. Partly comic-bookish, partly like the typical arch-villain from James Bond films (he wore a Hitlerian costume throughout), Amrish scared and amused the kids. His antagonism was unique. The role was originally offered to Anupam Kher and apparently taken away when he couldn’t quite deliver what director Shekhar Kapur had in mind.

“Dilwale Dulhaniya Le Jayenge” (1995) – Amrish’s best phase as an actor came not as a villain but as a stern disciplinarian with principles that the new generation finds impossible to uphold. More than Shah Rukh Khan, Amrish was the pivotal character of Yash Chopra’s all-time blockbuster. As the London-based Chowdhary Baldev Singh who pines to return to his village in Punjab, Amrish’s character propelled the plot through its tumultuous romantic karma. He was undoubtedly exceptional.

“Pardes” (1997) – Amrish Puri’s second famous NRI’s part spotlighted by his patriotic song “Yeh mera India”. Interestingly, Amrish was a part of every film by Subhash Ghai, from “Ram Lakhan” and “Saudagar” to “Pardes” and “Yaadein” and the just released “Kisna”. “Pardes” remains special for how different Amrish made this NRI seem from the one in “Dilwale Dulhaniya…”

“Ghaatak” (1996) – Arguably Amrish’s single most accomplished performance in a commercial film, “Ghaatak” featured him as the eccentric idealist (a role that Puri patented) from Uttar Pradesh who comes to Mumbai for medical treatment with his son (Sunny Deol) only to encounter the worst possible corruption in the city. The theme of disillusionment with corruption was reified in Amrish’s wizened face. Every wrinkle in his face told its own story.

“Nayak” (2001) – As the wily, wicked and grotesque chief minister who gets his comeuppance from a common man (played by Anil Kapoor), Amrish was larger than ‘laugh’. More than any of the other versatile and virile characters that he played, the role of the uni-dimensional corrupt politician showed how ably Amrish could transform a stereotypical role into a pageant of parody. Coolly caricatural and yet purely individualistic… that was Amrish Puri.

“Sharaarat” (2002) – As Prajapati, a cantankerous partly delusional old man thrown into an old folks’ home, Amrish was one of a gallery of veterans, and yet a natural cheerleader. Amrish’s scenes of verbal sparring with the bratty Abhishek Bachchan gave to the drama a rippling resonance.