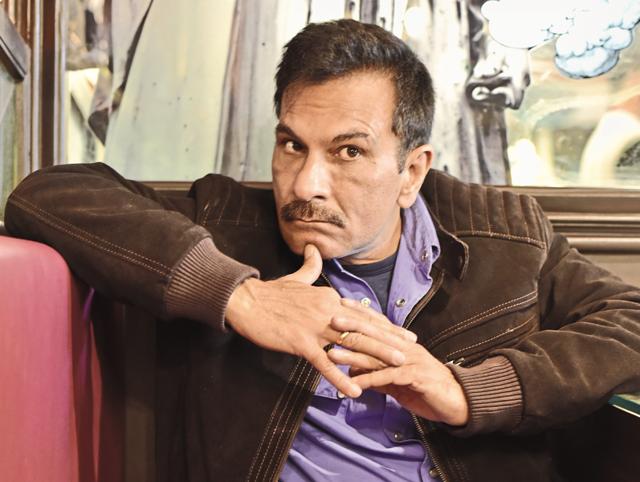 I’ve known Pavan Malhotra  personally and through his work  for close to 30 years.Back then when I first  knew  him he  was married  to  Aparajita Krishna  who  was  from Bihar  and Pavan would occasionally  visit his Sasural. The   two separated and Pavan  is  now happily married to  a beautiful  lady Aparna.

But it is his work that I am most  fascinated by. Incapable of a bad performance, Pavan is a  living  hurting  embodiment  of  the  neglected  talent   that  prevails in Hindi cinema where  privileged  children  of producers  directors are  given  chance after chance(after chance…) to  make an impression. Pavan needs  just one shot, just one  frame  to  excel. He  is  the  kind of actor our star-system  discourages  and decimates  out of fear  of being outshone.   Watch him in the 5 finest  films of his career so far.

1.     Salim  Lange  Pa  Mat Ro(1989):  Saeed(Albert  Pinto Ko Gussa Kyon Aata Hai) Mirza gave  Pavan his  first  full-fledged main lead, title role  and  all. Prior to this  Pavan  gained home-grown popularity  through the  serial Nukkad, where his  character Hari was  a hit. Salim  Langde required  months  of preparation:  Pavan had to  walk talk and  behave  a like  young Muslim  from Dongri  who reforms from  ruffian to  responsible , after he gets to know  about  the plight of  Muslims  during a communal riot.To add to the  character’s woes, Salim also  had  a limp in his walk. Pavan looked every inch the  Muslim  boy fron Dongri.He  was far more convincing than Naseeruddin Shah’s Albert Pinto in Aziz Mirza’s  film on the marginalization of  minority communities.

2.     Bagh Bahadur(1989): Pavan’s toughest role to date. He played a cityslicker  with a normal  life  who heads home to his village every year to  play a tiger on stage. Pavan  convinced director  Buddhdeb Dasgupta that only he, Pavan, could portray the tiger-man. After  intense  preparation, Buddhadeb regretfully informed Pavan that he  would not be  doing the role. Pavan was  acutely  wounded. By then  the role was his. And no one  else’s. Pavan fought tooth and  nail  like  a tiger and  got the part. It is the most animalistic portrayal I’ve seen  by a human being, filled with  hunger anger and  regret. A  masterclass.

3.     Black Friday(2004):  Anurag Kashyap’s   desperately  dark exploration of the plan to blow up Mumbai  had several  exceptional  performances, none  more so  than Pavan  who played Tiger  Memon with a reined-in ferocity that  was  at once menacing   and chilling. Each time this multi-actor ensemble allowed  him a  voice Pavan ripped  the screen apart. Wonder why Kashyap  never worked  with  Pavan again. Not much into groups and camps , Pavan has always  chosen to walk alone, like  a true tiger.

4.     Children  Of War(2014):  Set during the Bangladesh  war of independence in 1971 , Pavan Malhotra  in   his most  heinous  vilest  role. He  was brilliantly evil and slimy as the man who believes that if Pakistani soldiers rape and impregnate enough Bangladeshi women, the separatists and freedom fighters would stop dreaming of their own homeland. Malhotra was  so despicable  and  ruthless he made Ralph Finnes in  Schindler’s List seem  like  a saint.

5.     Grahan(2021): A web series portraying the  persecution  of   a  minority company,  Grahan places  Pavan on  the  other  side of Children Of War, as  a victim  of state-sponsored  brutality. His eyes  his body language  is that of a man who has seen so  much pain in life, it doesn’t scare  him at  all. In the climactic courtroom scene,Pavan just had  to stand and let his eyes  do the talking. Here he  becomes an embodiment  of every  persecuted  community in  the world.  How  do  you do it, Pavan?