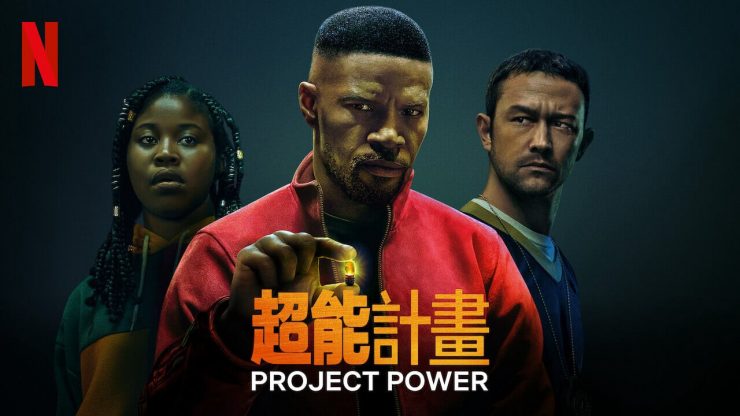 My worst suspicions  about  films  directed by two directors are confirmed  by this squint-eyed super-hero fiasco.

Never trust any  film that has  more than one director. Too many cooks not only  spoil the broth, they also  turn a potential main dish to a  sidey  affair.Project Power must have meant something   more than just one more film about  a  bunch of mismatched misfits saving the  city/world/universe .What it finally turns  out to be  is a   damp squib. No  two ways about that.

The  three heroes  in this  case are  the ever-dependable  Jamie Fox(here, so short  of support from the  skinny script  that  he’s left helpless  in his tracks) , paired with a  whole  lot  of   thoughtful  association with Joseph  Gordon-Levitt (who was seen  recently in that  engaging midair thriller  7500)  and a likeable new teen  actress Dominic Fishback .

The trio has to stop  the  baddies from  manufacturing  a pill that can turn anyone into a  super-hero for  five minutes.

This is  not only a  hard  pill swallow, it is also  way too bland to  make any claims to being grand. The  special  affects  showing the  baddies  mutating  into raging balls of fire are as  fascinating a  watching a worn-out  magician  conjuring  rabbits  out  of  a  hat.

The plot is of course  incomprehensible. The first rule  of a successful super-hero  film is  to  make the  goings-on as  inaccessible   to  the  audience as  possible.The climax on board a ship is  slippery and  self-referential without making any claims  to originality  or  innovation.

Sad to say  Project Power  is  not  only  incomprehensible  it is also  dreadfully dull  . The  action sequences   fail to hold  our interest . The dialogues seem to be written on the  sets while the characters were rehearsing for a  film that they thought was  going  to  be a  game-changer  thundering into theatres.Alas, the  film was cut down to size by its intrinsic  blandness  long before the  Virus could do its dirty deed.

Not that  the plot doesn’t try hard  to  impress us with its  cockiness when all  fails. There  is also a  story somewhere in this big-screen mess(cut down to size  by  the  ultimate  equalizer  Covid 19)   of  Jamie Foxx looking for  his daughter who  has special powers. Of that reminds me,everyone in the film seems  to have special powers.

But  the  co-directors’ specialty  is  to make us  abhor  all super-hero films for  as  long as they continue to be made.I am  sure  Project  Power took its power very seriously. But the Gods of all thing fun  turned their collective face away. What we are left with is  a sad  sorry  wannabe super-hero film with  no sense, forget sensibility.