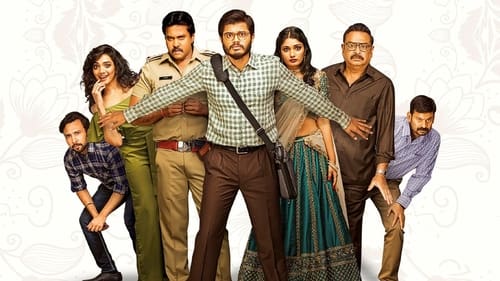 Director
Damodara
Writers
Damodara
Cast
Anand Deverakonda,Saanve Meghana,Geeth Saini
Plot
Sundar is a typical middle-class guy, working as a government teacher. He has to come up against a strangely unusual situation after his wife Meenakshi elopes with someone else soon after their marriage and to now convince the entire world that everything is alright.

Pushpaka Vimanam: For a comedy about a simpleton whose wife  elopes a couple of days  after their wedding, Pushpak Vimanam is surprisingly amusing ,sometimes  even eliciting a loud chuckle  if not a  roar of hilarity from  the audience.

In fact  the audiences were giggling right through the gags  as Telugu cinema’s Amol Palekar   Sundar(Anand Deverakonda) tried to  hide his wife’s  disappearance  from his colleagues at  the school where he teaches. He  even packs  his own lunch with  food  ordered from a restaurant  and  pretends it’s his wife’s dabba.

Then the teachers led  by the bullish principal decide to  come to Sundar’s home  for lunch…to meet his wife and  have her khaana.This is where  Sundar hires a small-time actress(Saanve Megghana) to  pose as his  wife for just one afternoon…and no,they don’t fall in love  and live happily after.

The most gratifying  aspect  of debutant director Damodara’s dishy script is  that it is always ahead of the audiences’ expectations. There  is a furiously feisty  feeling  to the  marital farce  which goes a long way in keeping our  interest alive  right to the end.

I also liked the seamless  transition from marital comedy  to a whodunit . From, ‘Why did  the wife run away?’ the  narration transforms into  ‘Who killed the wife?’ And we  were still watching.

One of  my  favourite sequences  in  the film is where Rekha, the  intrepid actress   is called a prostitute  by a boorish  cop, and she gives  it right  back to him all the while pretending that she  was  just showing him a sample of her acting talents. Episodes such as this tell  us  a lot about how men perceive working women, married women, single women, women per se…..Sundar, in  all innocence  calls a colleague at school TT, short for Telugu Teacher, even though she  doesn’t like it.And  on their wedding night he  pissses off his wife by wondering aloud if she is a  virgin.

This is a  film with a soft heart  . There are  no real  villains, except maybe  the murderer who seems  too muddled to be a trueblue criminal.

The sequences  have a robust rhythm  as  they  flow from one plot point to another.The music is well appointed  to  surface  as a  kind of  cute ‘geek’  chorus with dancers forming a ballet of quaint burlesque  whenever  the  director wants to emphasise the  hands of fate in man’s  unexpected  progress in  life

The denouement  did leave me  dissatisfied. But when has Indian cinema ever  selected a killer who is truly convincing? Be thankful that this comedy actually works  , if not in its entirety than in parts. Pushpak Vimanam is  a  film that Hrishikesh Mukherjee could  have made. It is  intelligently  written and it knows where to draw the line between the grim and the grin.

How Much Is Samantha Ruth Prabhu Charging To  Perform A Special Song  & Dance For Allu Arjun’s Film?