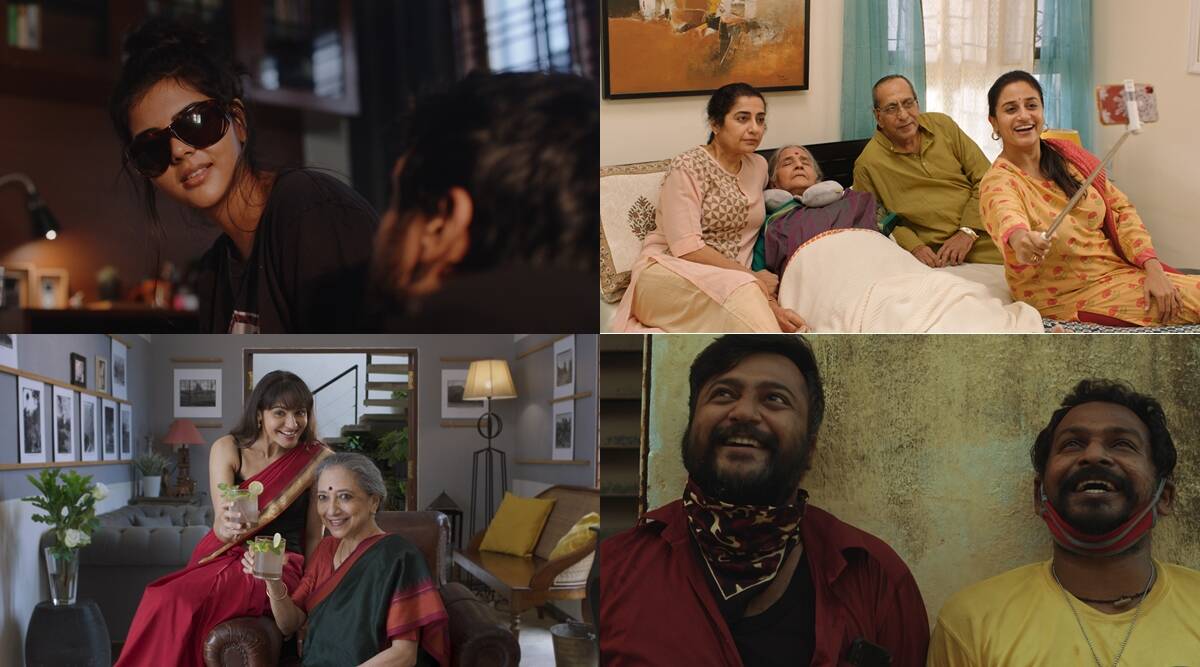 5 stories, not all  equally persuasive,about  individuals connecting during the lockdown, you would have to be  absolutely  heartless  to not fall in love with these characters and  their attempts to reach out  .A sequels of  sobs gleaned from the  first five stories that were  released  in  2021 , the current  stories are,  in many ways, far more  credible  and  connectible than  Season 1 which tended to  get over-cute while  showing couples  locked away together and blessing  all the  340  gods for this windfall of  time together.

In Season 2  the nerves  are far  more on-edge and  the characters are in  no  mood to look at  the  brighter side of the pandemic; because  by now  there is  none. In one of  the best stories  Loners directed  by  Halitha Shameem, the  protagonist  Nella(Lijomol Jose)  switches on  an app that gives her the sound of traffic for one  hour. She  befriends  a fellow-loner  Dheeran(Arjun  Das) and his dog  . Deeran  who warns Nella  that their growing  bonding could be  just a symptom of the  cancerous loneliness spreading itself out  further and  wider with each lockdown.

“Taking  out the trash every day is  a highlight  of your day. So is talking to me,” Dheeran  observes,  not  unreasonably. The  bonding between the two seems very real. I know  of so many  people who have befriended strangers  during their prolonged  solitude.

My favourite  story  of  the quaint  quintet  is  Mouname Paarvayaai  where a couple , played  with marvelous  muted nuances  by the redoubtable Joju George and  Nadiya Moidu,  are  not on talking terms for  months. This segment of  the anthology  is tender and brutally funny. The swipes at the husband’s ineptness in the kitchen when his wife falls ill, are so direct I felt like  an  inherent part  of  the plot.

Joyously , Mouname Paarvayaai is well paced, which some  of the  other stories are  not. Mugakavasa Mutham about two  traffic cops on  duty during   the  lockdown who  come close while uniting a pair of young  lovers , is  much too labored. The contrivances  diminish the story’s beauty.

In  Nizhal Tharum Idhama a  potentially resonant story  of   daughter returning to her  hometown  in Pondicherry after her father’s death to reclaim their family home,shoots itself  in  the foot  when   suddenly  director  Richard Anthony   decides to introduce  a bunch of  Greek Chorus dancers  whose relevance I couldn’t figure out. They  only made Shobi(played  by  the  very photo-genic  Aishwarya  Lekshmi who  has  a marvelous meltdown sequence  towards  the end of  the story) seem somewhat schizophrenic.

The  story that meanders  the  furthest  away from its centre  is The Mask.A  story about coming out,  it squanders  its  main plot-development opportunity in an  utterly  bland  encounter between  the closeted gay hero Arjun(Sananth) and an antisocial pal Velu(Dhilip Subbarayan). Before their evening talk session is done, we are  bored to distraction  by  the  sheer blandness  of  their conversation.

Despite the jerks of  discrepancy the anthology means well.And it has its heart  in  the  right place. Even in  its worst moments  the  anthology reminds  you of the unspoken ways in which the pandemic has changed  our lives.And it  does so gently,not afraid to tell  the truth but ensuring that the  sagas  of solitude  do not  spin themselves into a web  of despair.