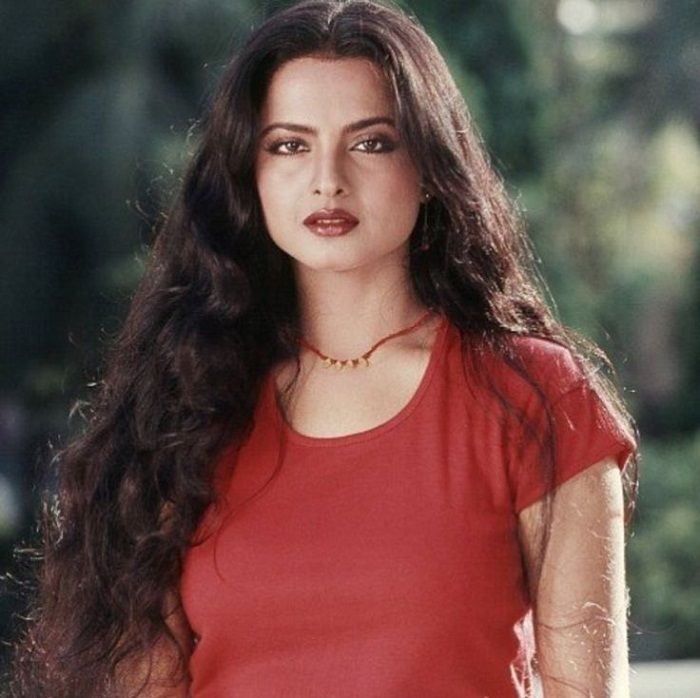 2. ‘Salaam-E-Ishq’: My God, what a whopping chartbuster! What would Muqaddar Ka Sikandar be without this Kalyanji-Anandji number? Rekha as the kothewali Zohrabai in Prakash Mehra’s mega-hit epitomized the Mujra culture as though she owned it….That the Big B joined her in the dance aided the song’s upswing.

3. ‘Tere Bina Jiya Jaye Na’: If you watch Ghar now you will realize it is a terribly overrated film. What stood out were Lata Mangeshkar’s melodies filmed on Rekha. You couldn’t miss the songs. There was one every 5 minutes. From the two divine solos ‘Aaj Kal Paon Zameen Par’ and ‘Tere Bina’ I choose the latter for its uptempo rhythm.

4. ‘Ghum Hai Kisike Pyar Mein Dil Subah-O-Shaam’: In this early R D Burman melody from Rampur Ka Lakshman Rekha acquired an image of absolute serenity and sobriety thanks to Anand Bakshi’s uncluttured but lucid lyrics. It was a turning-point in Rekha’s career.

5. ‘Kaahe Manwa Naache Hamra’: A little-known melody from Hrishikesh Mukherjee’s flop Alaap featuring Rekha and the Big B, this Lata Mangeshkar solo was the only solo composition by the great Jaidev that Rekha got to croon in her career.

6. ‘Pardesiya’: Sometimes an evergreen hit just happens. A mediocre song like Pardesia from the film Mr Natwarlal would have been forgotten under normal circumstances. But Rekha’s frantic dancing with her favourite co-star made it one of her most iconic numbers.

9. ‘Mera Saamaan Lauta Do’: Agar Ijaazat ho toh mian kuch farmaaon? The tale of a woman, her unfaithful husband and the Other Woman, Gulzar’s poetry was so evocative that while emoting Rekha didn’t have to strain her brain to understand the poet’s refrain. She just went with the flow.

10. ‘Jaane Kaise Beetegi Yeh Barsaaten Maange Huey Din Hain Maange Hui Raatein’: Lataji when she sang for Rekha and Gulzar Saab when he wrote words for her …there was magic in the air. I end my ten favourite songs on the ageless diva’s 68th birthday with this unknown melody from the film Baseraa…so wonderfully evocative that it makes us believe Rekha is indeed the Chosen One.

The  Dhanush-Aishwarya Divorce, Here’s The Truth