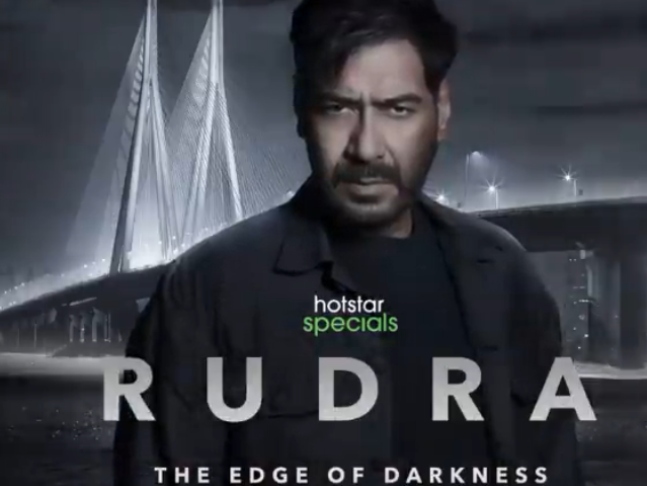 If you have seen the original BBC  series Luther,then you will enjoy the  Indian adaptation even more. Contrary to  what you are being told by learned  critics there is no  hidden  mystery in this  farfetched fascinating study of crime and the  city.The crime and the pepetrator are  out in the  open from the  outset. It’s  not the who  , it’s  the how that manoeuvres  this series from crime to  closure.

Ajay Devgn(he has again dropped  the ‘a’ from his name) is  suitably brooding and sultry as DCP Rudraveer Singh, known to friends as simply Rudra; not that he has too many friends and  even among the  few  that he does, one of  of them eventually turns traitor. Rudra is  a very troubled man . His marriage is on the rocks.  His  wife(Esha Deol, making  a  pleasant comeback) is seeing  another man(the talented Satyadeep Mishra) and  this man seems more caring,considerate  and  compassionate than Rudra who spends all his time hunting down  vicious  unsavoury killers.

How he has managed to remain sane is a bigger mystery than anything that happen on screen.

Right at the start he establishes a  yawn sambandh with a redhaired  femme fatale Alia Choksi(Raashi Khanna) a selfstyled ‘genius’ who is accused of murdering her dog and parents,in that  order. While  Alia is being interrogated  Rudra yawns. She doesn’t  yawn  back. That is supposed to be proof of her   guilt. Don’t ask me how. Ask Rudra.

He  knows things that we  don’t as he   hunts out killers the way Alsatians sniff out  intruders. His  seniors are extensively exasperated by Rudra’s extempore  work ethics. He is constantly reprimanded by is  boss, played by the wonderful  Ashwini Kalsekar  who for a change plays  a non-comic  character.

Interestingly Rudra, a much-feared  cop , is constantly bullied by  the three women in  life : his wife,boss and  the mysterious genius Alia  who seems to have a head for homicide that comes in handy for  Rudra  as he tracks down some really nasty  criminals .

The most despicable  of  them  is  a modern art painter named  Siddheshwar Kumar who  kidnaps young women and  uses their blood instead  of  paint on his  canvas. A  bloody loathsome slippery  psycho whom Rudra nabs through a trail of clues that don’t really  add up. What keeps us glued to this episode is K C Shankar’s chilling  portrayal as a psychopath.

But  the episode that  grips you in an edge-of-the-seat  way is the one  featuring the brilliant Hemant Kher (he played  Harshad Mehta’s brother in Scam). A timid taxidriver  by  day, Mahesh  gets seriously  psychotic by night.The  episode has  layers  of dark blistering  anger and humiliation . It is  a killer.

Rudra , the series and  the protagonist, convey a distant brooding intensity that  builds into a slowburn experience of  considerable  interest. It is not without its flaws.For one , the  terrific Atul Kulkarni’s buddy-buddy  act clashes  his  all-white hair with Devgn’s jetblack head. One  of the two  needed to  dye.

A lot of the  cop-tropes from the original series has dated.Director Rajesh Mapuskar yanks the  dark  simmering  drama of discontent  out of its frozen  format to give it an irresistible fiery fluid  flavor .

Devgn is  terrific in the central  role. He brings in  his  star aura to give the  series  a scintillating  thrust.Some  other  players  in  the  cast could have been  better.  But I am not complaining. Rudra is riveting when it is  not temporizing and a winner  for Applause Entertainment who have been on a winning spree.

Advertisement
Related Topics:BollywoodrudraRudra news
Up Next