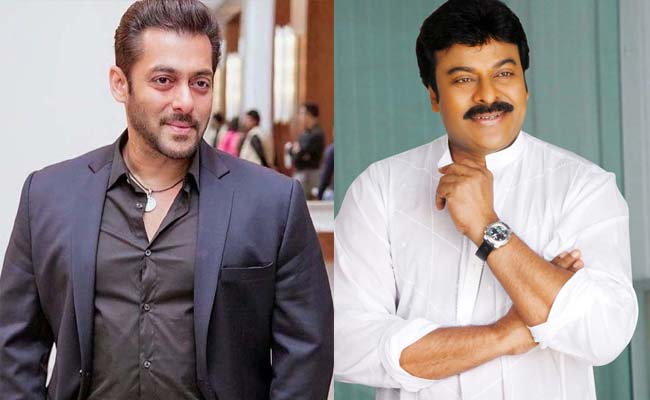 Telugu cinema’s veteran superstar  Chiranjeevi and Salman Khan have always been close. In fact when Ramcharan Teja was shooting in Mumbai  for his Hindi debut Zanjeer in  2012, Ramcharan’s  lunch was sent  from Salman  Khan’s home every day.

Salman found another  way  to honour Chiranjeevi. In Dabangg 3  when Salman did  his first “item song” entitled Munna badnaam hua, a male version  of the  popular Munni badaam hui performed  in the first Dabangg  film by Malaika Arora,on Salman Khan ’s insistence choreographer-director Prabhudheva incorporated  Chiranjeevi’s  celebrated “Veena step” where he glides  in the shape  of  the  Indian  musical instrument , the Veena.

Then  At the 60th birthday bash for Telugu matinee idol Chiranjeevi organized by son Ramcharan Teja at the Park Hyatt in Hyderabad, a very  close family-friend of the Chiranjeevi family, Salman Khan flew in from Mumbai  on a private jet and had himself a ball.Salman danced to a medley of Chiranjeevi’s hits on stage. Chiranjeevi was thrilled to bits.

And now Salman is  all set to make  an extended guest appearance in Chiranjeevi’s latest Telugu project  . Directed by Mohan Raja , this untitled film is  a  remake of  the Malayalam  hit Lucifer. Salman Khan is expected to  have  a long action  sequence  alongside Chiranvjeevi.