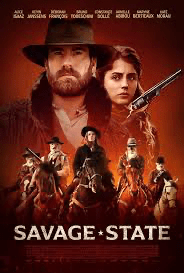 As the genteel French  Todeschini family made its way from its posh existence in Missourie to New York to flee back  home in Paris  to escape the  wrath of the American Civil War, I thought of J P Dutta’s Refugee  where  Abhishek Bachchan  guided  the incandescent  Kareena  Kapoor and her family  across the Indo-Pak border and promptly  fell in love with the  bewitching daughter  of  the house.

Love blossoms between   the  eldest daughter Esther(Alice Izaak) and  Victor(Kevin Janssens) the mercenary the family’s patriarch Edmond(Bruno Todeschini)  hires to reach  his family to safety. This is a film about a craggy journey along  an unpredictable dangerous route  filled with blazing guns  and  perilous roadblocks.

The director transforms the rugged  adventure story  into something deep-rooted and tender, spirited and supple.As  the confident  narrative  moves forward the focus shifts  completely to the ladies until we reach a point when  there are no men around to protect  these  beautiful women and they  must take to the  gun themselves.

A  plot never shorn  of  surprises,  a cast that  seems to belong to the remote past and some of  the  most  lucid photography(by  Christophe Duchange) seen in recent cinema(how  evocative the  landscape  would look on the big screen!) constitute  a semi-epic  that  misses  being an outstanding  work  because of its superficial  view of  the historic events that are microscoped in the fictional world that the writer-director  David Perrault constructs  so diligently .

Alas  the  narrative doesn’t dig its heels deep enough .Eventually for all its strikingly staged drama(one sequence   of the family negotiating a potentially lethal  abyss is heartstopping) Savage State  remains more remarkable for what it attempts than what it achieves.  The  plot  is over-burdened with drama, some of  it totally uncalled-for. That whole  subplot  about a female bandit (Kate Moran) chasing down the fleeing French family, is  far from welcome. The  dynamics  within the family—the relationship  among the  three sisters  and  between the patriarch’s  wife(Constance Dollé) and mistress(Armelle Abibou)—are far more controlled and  compelling.

The  performances are  uniformly convincing, though  none  of these actors are aiming for an  Oscar.The film is worth watching for  recreating the tumult of the Civil War  in a tone that is forever  civil and  never savage.