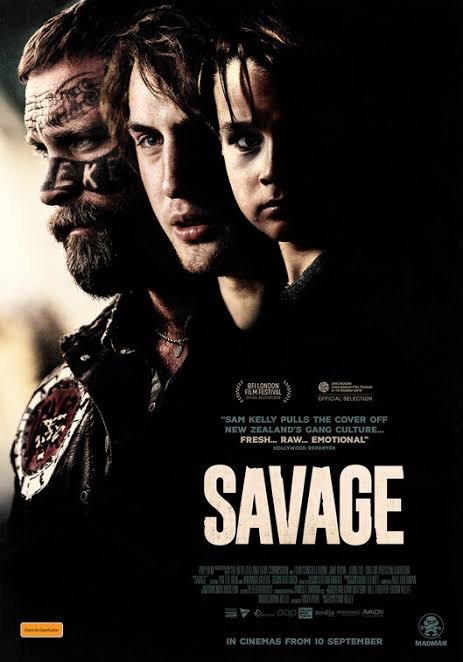 Brutal violence as a way of life is  something we  have got accustomed to in cinema  of Martin Scorsese  and  Quentin Tarantino. When another director comes along with a visceral  view of  street  violence we  are taken aback.

So it is with New Zealander Sam Kelly’s Savage. The  film lives up to its aggressive title  only to  an extent. Parts of  the  film are harrowing ,others  surprisingly  gentle  and moving as we go through  various flashbacks in the  protagonist Danny’s life to know him and to understand  why he  has  turned  out the way he has.

By far  the  most defining moment  in the  script comes in Danny’s childhood. At  9  we see  him turn into the rebel of a  family lorded  over  by a strict abusive Church-going father who doesn’t hesitate in  using the belt on his kids. Danny ends up in  a remand  home where he  meets  Moses. They  are inseparable friends and partners  in crime  for  the  rest  of  the  film.

Savage  doesn’t hesitate  in prodding and  poking wounds that  never heal. As we see Danny and his friend Moses  in different  times  in their lives we  realize  that theirs is an extraordinary existence remarkable for its intrinsic violence  and its repudiation of the  stability of  domestic life.

As time flies we see Danny  in different  parts  of his  existence, but always shrouded  in violence.  Director  Sam Kelly has done well to cast  three different actors as Danny. Somehow all three faces coalesce  without violence working towards creating a single identity for  the troubled traumatized Danny.

The film’s colour palate  suggests  a kind of  pale bloodshed . The  frames  are  filled with a furious fluidity that suggests  the  precariousness of lives lived at the edge, devoid of  home stability  and joy. The finale  where Danny finally re-unites with his estranged  mother will break your heart.We didn’t see that coming.

Savage  is  filled with surprises.  It  projects  a  side of  New Zealand,  a side more dark than verdant,grim rather than green, which we’ve never seen  before. It is a work of brutal art, showing life as mean, cruel and unforgiving.  But eventually its also says that love can find you in the most unexpected  places.