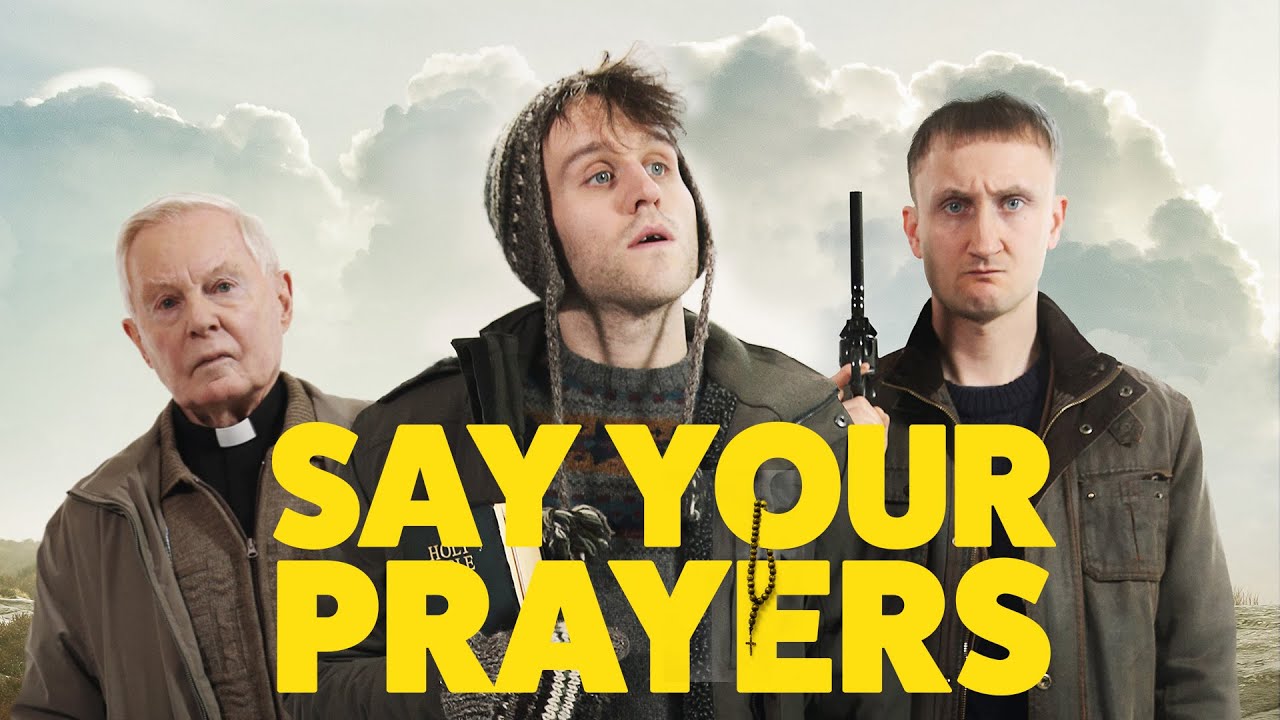 Filming began during the “Beast from the East” winter storm in February 2018.

Say Your Prayers: Oh my  God!  This wry dry  deliberately droll  and tall British  comedy , takes sweeping satirical swipes  at organized  religion, and emerges  from the trial by fire smelling…well, if not exactly like roses , then somewhere close.

Say Your Prayers is  a clever title for this  iconoclastic pilgrimage. It is what you advice to someone  about to die. Or then  it a command from  a  believer to a non-believer. There are both the  factors in this witty  wise and wacky  comedy,  so acutely insightful and pungent in its writing—take  a bow, Harry Michell and Jamie Fraser—you just want  to get  your  hand  on   the script to see how much of the humour on paper has been transferred  to the  screen.

Quite  a lot, I suspect. Quite  a lot! The  plot bristles with a  savage humour , albeit  swathed in  an amazing grace. In the  attention-grabbing opening, we meet  the film’s two heroes—if that is how we can describe the two Yorkshire siblings,  one of  whom is hyper-excitable  and the other plainly  a  bit daft—who end up killing the wrong  guy.

You see, brothers  Vic(Tom Brooke) and  Tim(Harry Melling) have been assigned to  exterminate the  anti-religion  crusader  John Huxley(Roger Allam). They  mistake  another man for their intended  target. What follows is a melee of mirthful  mayhem with the two  mismatched brothers—one who  has no appetite for  blood  and the  other who  is determined to enjoy his assassin’s  vocation—trying to make amends  with their fanatic religious leader(veteran Derek Jacobi, fabulously reined-in  with his villainous  religiosity) by finding the  right  murder victim and snuffing him  off the face of this ungodly earth before he  does more harm  with his  anti-Christianity.

The  screenplay is a scream play. Many times  I found myself laughing  out loudly at the  bungling brothers’ bloodthirsty antics. Both the actors playing the brothers are superb  in  their   neurotic  niche. But Harry Melling is better than  Tom Brooks. Don’t ask. He  just is.

Say Your Prayers  is  a film that allows no questions. And  it answers  only those question that it  chooses  to. Take it or leave  it. Hence the  crux of the battle between  religion and its  doubters—is there a God?—is unanswered.  But  a subsidiary issue—whether there is a  God or not there sure as hell are people  having fun at His expense—gets a rollicking representation  in this remarkably  ribtickling  rant on religion versus the cynic.

Among  its  many  virtues,  count the  female cop who is assigned  to protect the anti-religion  god-awful crusader  . Hollywood has a long history of quirky female cops, Frances McDormand  in  Fargo  being the  classic  case. Here she  us played  by  Anna Maxwell  Martin who looks  like she would rather be watching Say Your Prayers at  home with her feet up and tub of popcorn  than be a character in the  film.

Chalk  up  a winner  for this delightfully irreverent  tongue-in-cheek cheeky comedy about God , and the  atheists .

Plot
Two orphaned brothers turned radical Christian hitmen venture to rural Ilkley under the instruction of Father Enoch. Their mission: assassinate the famed atheist writer Professor John Huxley. Say Your Prayers is a British dark comedy about religious fundamentalists plotting to murder an atheist author, and includes violent scenes and plenty of strong language.
The movie cleverly adapts well-known thriller roles, with a pair of Christian brothers as hit men, Vic (Tom Brooke) and Tim (Harry Melling), and a chillingly corrupt priest, Father Enoch (Derek Jacobi) as the crime boss.
The brothers are depicted as victims of an intentionally dangerous upbringing. But despite this sympathetic portrayal, there are few if any positive messages to be taken.
The movie isn’t anti-religion, it instead effectively highlights how all institutions can fail people if run by corrupt figureheads. Though occasional, the violence is strong, including murder and a bloody headshot.
Related Topics:\Say Your Prayers MovieSay Your Prayers ReviewSay Your Prayers(Amazon Prime  Video)
Up Next