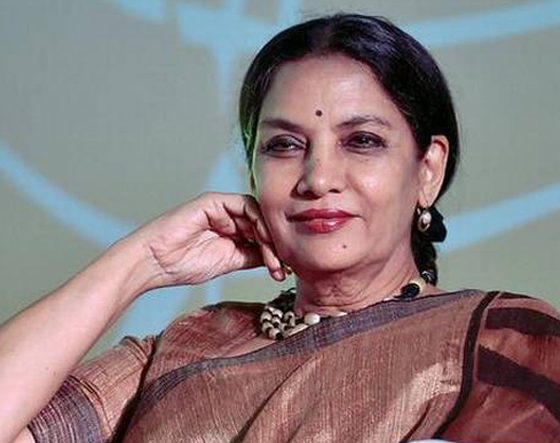 In spite of being  India’s most relevant and  celebrated  contemporary  actress Shabana Azmi  never stops looking for  new opportunities  to challenge her gargantuan talent.

In the  last two  years she has discovered  two new  filmmakers  who have thrown open new doors  for her to walk through.

Spielberg has produced  Halo which  has Shabana in one of  the  leads.

“At  76, Steven Spielberg has the energy, enthusiasm and  eagerness for  new challenges , of a child. He is forever exploring new ideas. He  won’t rest on  his laurels,” says Shabana.

As  for Karan  Johar, Shabana says  she was taken aback by his commitment to the craft. “When one thinks of Karan  Johar one thinks of him as a glamorous popular  figure  in  and out of parties, etc. That he is such a committed filmmaker came  as  a complete surprise to me. It’s not easy to direct so many actors  in one frame. But he  has done full justice to every character in Rocky Aur Rani Ki  Prem Kahaani.”

Says Shabana, “I’ve never had  a chance to look so glamorous  in any of my films.I remember we were were shooting in Delhi in November  and I had to attend a wedding right after  the day’s shoot. I decided to go in the saree and jewellery that I wore for the shooting.Our designer Manish Malhotra was aghast. ‘How can  you go in costume jewellery? At least let me give you real jewellery to wear.’ But I decided  to go the way  I was, and I got complimented throughout the evening for  how good I  looked.”

“Aasmaan Bhardwaj Has Gone A Little Further Than  His Dad,”  Says Naseeruddin Shah

Aamir Khan To Team Up With KGF Director?