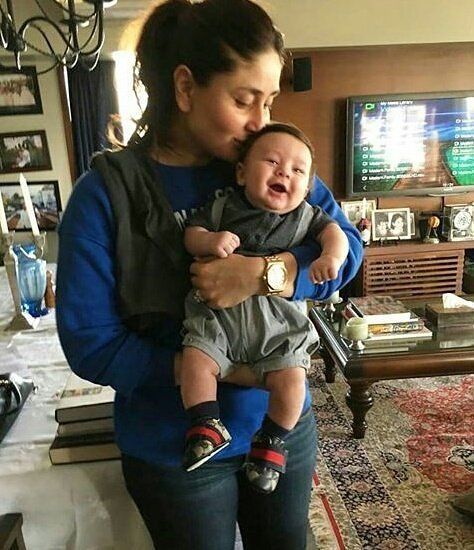 So far he  was the darling of  the social media. Now Taimur Ali Khan, by far the most popular  2-year old  in  Asia, has made  his  television debut on Indian prime-time television.

It happened by accident on  Wednesday when  Saif Ali Khan was  doing a  live interview with  Times Now about how  his wife Kareena  and he are  coping with  the enforced lockdown , and that having their little bundle  of positive energy( Taimur Ali Khan ) around is  certainly helping them to  cope, when Taimur Ali Khan  suddenly walked  into  the  interview.

He jumped  into his father’s lap. The anchor on the other end, seeing  TRPs shoot up suddenly, nearly had a  fit when she saw  Taimur Ali Khan . Unfortuntely since  Taimur Ali Khan  couldn’t see  the news anchor he quickly grew  bored and ran away from the  camera after having unwittingly hijacked his father’s interview.

We  hear this is the beginning of the phase 2 of Taimur’s  exposure to the media.

Says a close friend of  Kareena and Saif, “ Taimur Ali Khan ’s appearance  in  Times Now  was  not planned . But they have numerous offers  for family  magazine covers, and combined interviews  on television.”

We just hope Saif and Kareena  would  remain sensible about this and  not  allow  Taimur Ali Khan to be interviewed  on various  media  platforms.