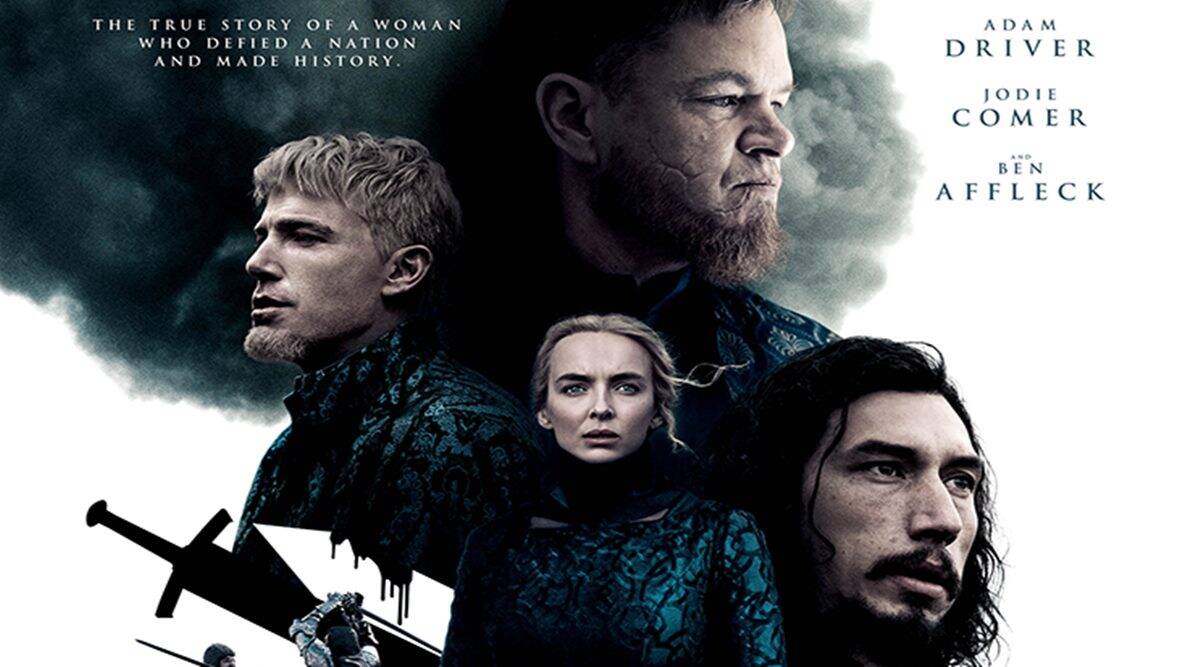 There is probably a  greater film submerged in this good film. We will never know.Just as  we will never know  if  Marguerite de Carrouges, the  noblewoman who is played with a seductive sublimity by  the  underrated British actress  Jodie Comer, was really raped  by her husband’s former friend and  soldier colleague.

Was she  brutally raped  , as she  claims, or was there  some  kind of  a  come-hither invitation,  some sort  of  pleasurable  plug-point during the plunder as we saw in  Paul Verhoeven’s  disturbing French film Elle where Isabelle Rupert  looks  forward to  a revisit from her masked marauder.

In The Last Duel, the great Ridley Scott has constructed a slippery edifice teetering dangerously on the border between truth and conjecture. Recalling one  of the earliest  reported cases of rape,  it  examines  the sensitivities of the  issue   and  the  intricacies  of the court hearing in a tone that is sometimes luminous, sometimes labored.

It is as  though  director Ridley Scott WANTS  to believe  in his heroine’s truth. But is not fully convinced. A  part of the problem is Matt Damon’s flabby  interpretation  of  the  husband Sir Jean de Carrouges who is  righteous but dull, agile but   frumpy, and most inept in bed. His friend turned  foe as played by Adam Driver is a complete ladies’ man who is known to seduce woman like other men behead  their enemies on the battlefield.

You can’t cast  Driver against Damon  and expect the audience to pitch for  the  latter.

So  what  really happened between Marguerite  and  Jacques Le Gris? Did he really fuck her against  her will?She  says he did, He says he did not. Three different interpretations of the truth are  compiled into  a compelling drama  of amorous ambivalence.  Jacques   goes to his eventual death  swearing on God there was no rape while  Marguerite remains steadfast  in her accusation.

Based on the  2004 book The Last Duel: A True Story of Trial by Combat in Medieval France by Eric Jager and set in medieval France, The Last Duel is a wannabe  masterpiece that stops short  of attaining its full power and glory by dint of its ambivalence.

Does rape  become consent   if the woman obtains sexual pleasure in the  violent act?

These are not  questions that could be asked, let  alone  answered, in any civilized society.To his credit  Ridley Scott takes no shortcuts, offers  no easy solution  to the  problem which plagues the plot both organically and extrinsically. While the three main characters grapple with the issue in their conscience and  in the court of King Charles V1(played with infantile imperiousness  by  Alex Lawther) the three  protagonists fight their own   private battles.

A shroud of uncertainty covers this remarkable but fatally flawed film. Can a film on a historic rape  case from the 14th century be  put on screen without the writers(Nicole Holofcener, Ben Affleck, Matt Damon) and director taking sides? Apparently, it can. The Last Duel gets away with  a far-from-conclusive  projection of the alleged rape. It doesn’t bother to be  politically correct. It looks at male predatoriness as  a routine act, and hence excusable.

There is a strangely  supine   tug  ‘o’ war played out between Marguerite and  her mother-in-law(played by the brilliant veteran British actress Harriet Walter). In it , we see what is  clearly the problem with women: it is not the men  but the women themselves who can’t support one another  .