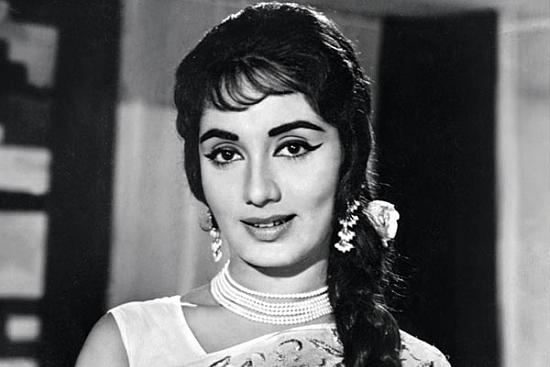 Sadhana had it all:  beauty, grace, elegance  ,style, and a rare talent to underplay her part during an era when  overstatement was  in vogue. A rare  mystique  and  an impish charm  defined Sadhana’s  onscreen  personality  until disease decimated her exquisite looks.

Nonethless she  struggled on giving  hits even after her health deteriorated and beauty faded.It’s hard  to  pick Sadhana’s best. She was so consistently  likeable. But  here goes.

1.     Prem Patra(1962): Two years after her debut as  a leading lady in the  musical  hit Love In Simla(directed  by  future husband R K Nayyar)  the great Bimal Roy cast Sadhana  as  the  simple salawar-kameez clad girl who looks after her  beloved Shashi Kapoor after he  loses his eyesight  in an accident. Many would  prefer Sadhana in Bimal Roy’s Parakh which came  a year earlier and in Vijay Anand’s Hum Dono which  was  released  during the same  year as Prem Patra. But the  Sadhana mystique  in  both Parakh and  Hum Dono is  based on  the enchanting songs(O sajana barkha  bahaar , Mere Mann ke  Diye, Mila Hai kissika  jhumka in Parakh,  Abhi na jao chhod kar and Allah tero naam in  Hum Dono). If  you really want to see Sadhana’s true caliber as  a naturalistic actress see her in Prem Patra. Lata Mangeshkar’s songs  Ab aur na kuch bhi yaad  raha,Saawan ki raaton mein, Yeh  mere andhere ujale na hote  seemed designed for that  exquisite face.

2.     Mere Mehboob(1963): Between  1961  and  1965  Sadhana  starred in several super success such as   Hum Dono, Ek Musafir Ek Hasina,  Raj Kumar,  Woh Kaun Thi,  Waqt and  Arzoo. But none  of these  was  as  big  a blockbuster as Mere Mehboob.Although  a mediocre  Muslim Social, Mere Mehboob went a long in amplifying the Sadhana  Mystique. Playing the beauteous  Husna Banu , Sadhana was every inch the veiled enigmatic  beauty.  For a   very long time  her fans  thought she  was  a Muslim in real life too. Unlike Mala Sinha who  played Muslim characters repeatedly  Sadhana  was  part of only one  Muslim  Social. But the  impact  was reverberant and  everlasting. The songs Mere mehboob tujhe meri mohabbat ki qasam and Tere pyar mein dildar  added to the Sadhana Mystique.

3.     Woh Kaun Thi(1964):  The ethereal spirit roaming the night in a  white saree singing Naina  barse rimjhim rimjhim. This  became the signature –image of Sadhana’s career. So  enamoured was director Raj Khosla of  the  Sadhana Mystique that he cast her  once again as the ‘Kaun’ girl  in  Mera Saaya and Anita, with less satisfying results.

4.     Arzoo(1965):  Bringing the Mere Mehboob pair together again, Arzoo featured Sadhana as a woman who  would go to any lengths for her beloved.So when Rajendra Kumar  loses a leg  she  offers to lose one  too.Forget  the story. Just focus on that chic Sadhana  haircut, one of the ‘fringe’  benefits of being born with a wide forehead, and the tight salwar and kameez ensemble which girl in the 60s embraced enthusiastically. Lata Mangeshkar’s Bedardi balma tujhko mera mann yaad karta hai and Ajee rooth kar abb kahan jayeyiga made the  Sadhana Mystique so  much more alluring.Sadhana teamed up one  more time with Rajendra  Kumar in Aap Aaye Bahaar Ayee and that  too  was  a hit.

5.     Inteqaam(1969): A very powerful  story  that I keep asking my  friend Sanjay Bhansali to remake, Inteqaam featured Sadhana as  a  woman on a vendetta spree against the family  that ruined her father. Sadhana’s  devoted  husband R K Nayyar  directed  the  film which  boasts  of  one of Laxmikant-Pyarelal’s best soundtracks. Geet tere saaz ka,  Aa jaan-e- ja, Kaise rahun chup and Hum tumhare liye  topped the  charts for months.Interestingly Sadhana did  two films  Inteqaam and Ek Phool Do Mali with Sanjay Khan in  1969. Both were  superhits.

Related Topics:SadhanaSadhana birthday
Up Next