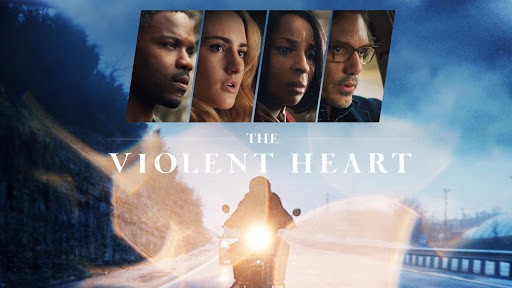 The  Violent Heart is  a film that  doesn’t enjoy its own silences. Most melodramas—and this  is  no doubt a certifiable member of the  maudlin club—are loud and persuasive  with a  background score that announces  the emotions on screen from miles away.

The  Violent Heart keeps it all  under check, all bottled up and ready to  explode. The emotions are  a raging fire burning inside  the  characters, some  of whom have terrible secrets which  they have been  hiding for  years.The sleepy smalltown ambience c lulls us into  a false  sense  of  wellbeing.

The  opening is  violent.  The hero Daniel(Jovan Adepo) sees his sister being murdered in the woods when  he  is barely old enough to understand what is happening. The  incident  naturally  colours his life.Colour reminds me, Daniel is a Black man.I  bring this to notice because the  film never makes a mention of  his colour even when he falls in love with a  beautiful white girl Cassie(Grace Van Patten).

They are  on the same wave-length from the  minute they meet.  They get along  smoothly and  for all practical purposes, are  made for each other.So what’s the problem? That’s the question Daniel’s young brother  Aaron(Jahi Di’Allo Winston) asks  his brother with all the wisdom of an adolescent .

Like I said,  the colour of their skin  is not an issue. The problem here is  not skindeep at all. It is something  else.Something far  more disturbing and immoral. When the issues come bubbling to the  surface  it is too late to cork  the bottle.Before the  films ends.he  accusations and  allegations  are hurled  back and forth .Guns are fired, egos wre wounded.

There seems  little of the  control that  was evident earlier when the  plot was  trying to find a  voice for its hero Daniel. Or when he tries to  explore  the love angle in Cassie’s  arms  . Daniel’s  love  relationship with his  kid brother  also has a certain rhythm  and grace  lacking  in  the  latter parts  of the narrative when  it all comes undone.

Lukas Haas playing Cassie’s father emerges as  the dark  figure , and the one  that  kills  all the sunshine  in the story. Lukas’s  Joseph is   a curiously  uni-dimensional character in a  film that encourages  ambivalence  in  its character.  He  is  not only the heroine’s father  but also her English teacher. His fall from grace is  therefore doubly disgraceful.Don’t say you  didn’t see it coming. The man  is up to no good from the start.

Before the  end he is  on the floor grappling like  a cheap  villain from a slasher film. Lukas Haas is  a fine actor. But this film has nothing dignified  to offer him. His villainy brings not  only his character down  but also diminishes the slow-burn impact  of  the  sleepy-town romance  with some  lovely  performances.

“There Is No Khan Like Feroz Khan,” Celina Jaitly Remembers Her Christopher Columbus Feroz Khan