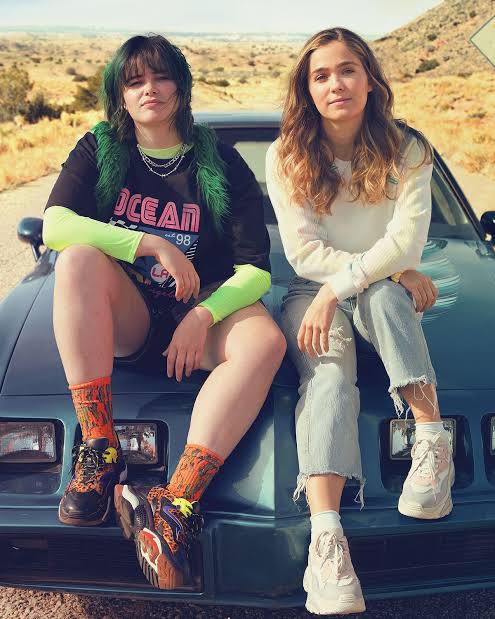 It was  just the  other day when  Eliza Hittman(that’s a woman) gave us the  profoundly immersive Never Rarely Sometimes Always  about two  girls travelling to a pro-abortion state in America after  one of them  gets pregnant in a no-abortion state.They’ve nowhere  to stay in New York . Their  desperation  was  deeply disturbing.

Well, look at  the coincidence!  Another film about two girls  travelling to a  place where abortions are allowed when  one  of them gets morning sickness.

To  be honest, this  loud rumbustious bad-girls  version of  Hittman’s  sensitive film left me queasy  and   stricken.The two protagonists  on a rowdy road trip are so obnoxious that I  just wanted to slap them when it got too much. The pregnant girl Veronica(Haley Lu Richardson)  has  a caring boyfriend ready to marry her. But she  thinks he is a jerk. If so, why did she allow him to impregnate her? The vagaries  of  the teens, I tell you!

Veronica’s companion  on this  mission to abort  is Bailey(Barnie Ferreira) a feisty  fun-filled overweight  do-gooder who  knows she’s being used  by her bestfriend  as a travelling companion.  While  Veronica has baby issues, Bailey has daddy issues. We  the audience have attention issues.

The  ride is bumpy but buoyant, at least for the two girls. I wish   it was the same  for  the audience. Watching the two girlpals screaming at each other  and  encountering  all sorts of eccentric characters  on the way(including an anti-abortion couple that behaves like characters  out  of Ramsay horror movie) is nerve-grating after  a point.

The one  good  thing about  abortion is  it prevents bringing into the world  raucous uncontrollable  children  like the above.  Unpregnant would have been  less intolerable if it had  come  before  Never Rarely Sometimes Always. With the  earlier film completely stealing the March Unpregnant looks  like a wannaba-cool  take on pregnancy and abortion  with  characters who are  planted in the plot to look conspicuously overloaded. The two female leads are better than the material they are given . They make the best of a  lousy bargain.

Related Topics:UnpregnantUnpregnant movie review
Up Next