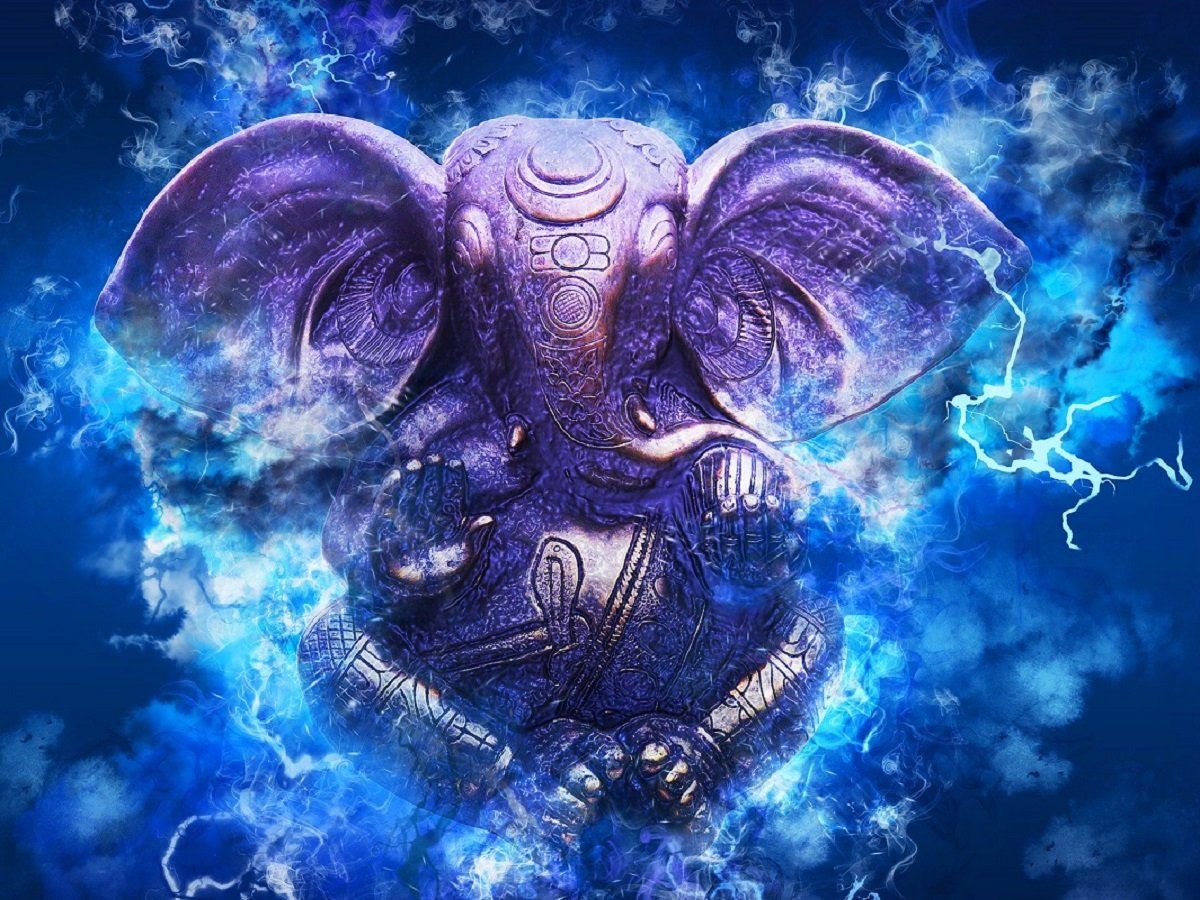 Every year in the Nightingale Lata Mangeshkar’s home Prabhu Kunj  on Peddar Road, the Ganpati Festival is a period of great joy and celebration. The doors of the famous Mangeshkar home  are thrown open for family and friends.The entire Mangeshkar clan of  4 sisters, 1 brother and the spouses and children throw in their fervour for a fortnight, all professional commitments forgotten for the interim.

Ganesh Chaturthi  is the socially most active time of the year for Lataji. She once said to me, “We  Mangeshkars  give a lot of importance to Ganesh Chaturthi. We celebrate it for the full period of its occurrence. Relatives and guests are welcome all day long. It is the one time when the entire family comes together .Yes, I’d describe it as the happiest time of the year. For me my family means happiness.”

On the other end of town in Juhu, movie moghul J.P.Dutta and his wife Bindiya Goswami treat Ganesh Chaturthi with just as much reverence and affection as the Mangeshkars. For the Duttas Ganesh Chaturthi holds a special significance.

Says Bindiya, “When our younger daughter Siddhi was born JP left us at Breach Candy and drove towards the Siddhi Vinayak temple.Would you believe it, at 2 am in the morning the temple lights were on and the temple services in full swing!JP went inside.There was  a pundit in the temple and no visitor except  JP. At that moment he felt a divine connect with Ganeshji.We decided to name our daughter Siddhi and host a Ganesh Chaturthi celebration in our house . We’ve maintained that tradition for 15 years now ever since Siddhi was born.”

Bindiya considers their open-house Ganesh Chaturthi celebration the equivalent of the Punjabi langar. “Anyone can come to the house anytime during Ganesh Chaturthi. We spend days and weeks decorating the Ganesh idol. Every year my daughters and I do a different theme on the idol.We’ve  the priests from the Siddhi Vinayak temple coming in the morning and evening for the aarti. Yes, like Lataji said to you, this is the best most peaceful and purifying time of the year.JP experienced a miracle with  Ganesh’s blessings.And it’s JP’s mannat that Ganeshji should come home for the last 16 years. ”

The Duttas host a 7-day Ganesh celebration in their home. A similar fervour is shared by various other families in Bollywood. It’s a Maharashtrian thing, to  a large extent.

Says Subhash Ghai, “We’ve been bringing Ganpati home for decades .And we feel blessed. If you grow up in Maharashtra you grow up with Ganpati being a part of your life. It is everywhere.In your emotions, spirit, mind and soul and when the annual Ganesh Chaturthi happens all those emotions connected to Ganesh bubble  to the surface.”

What gives Shabana Azmi added joy during the festive season this year is that Eid and Ganesh Chaturthi fall on the same day.

Says Shabana, “My sister-in-law Tanvi brings Ganpati home. This year it feels terrific because we celebrate Eid and Ganesh Chaturthi back-to-back.This year we go straight from Biryani to Modak! Such is India’s syncratic culture, which I’m proud to be part of.”

Shabana recalls many Ganesh Chaturthis from her childhood. “As children my brother Baba and I would be taken to Sarvajanik Ganpati mandals in our area in Girgaum. I have extremely warm memories of those visits.I love the mangalmurti aarti. Many of my close friends bring Ganesh home.And we go visiting them.Among the people we visit are Neetu,Rishi Kapoor, Rani Mukherjee, Anil Kapoor and his wife Sunita, Mona Kapoor(producer Boney Kapoor’s ex-wife) and Manish Malhotra. No other country boasts of as many religious festivals as we do. The diversity of religious celebrations is our strength. Abba(father Kaifi Azmi) used to be big on celebrating all festivals.We carry the tradition forward.”

Poet-lyricist Prasoon Joshi who grew up in North India became familiar with Ganesh Chaturthi later in his life. “I love the festival! In my growing years I had only heard of it.But over the years in Mumbai I’ve become very attached to the whole celebration. I don’t bring Ganesh home. But I join friends every year. I think it is one of the most beautiful festivals in the world.”

Actor Samir Soni who is from Delhi and singer Rekha Bhardwaj say Ganesh Chaturthi has no ritualistic significance for them .

Says Soni, “Growing  up in Delhi where it is not a big event it’s never had a huge important in my life other  than the frenzy it generates on the roads. But I do visit friends in Mumbai for darshan and Ganpati meals.Other than that I believe God is within us and an extremely private relationship. Hence I shy away from public demonstration of devition.”

Rekha Bhardwaj says Ganapati is everywhere in her house, and yet not a reason for religious celebration. “I don’t follow any religion. I don’t do Ganapti puja. I’ve done Ganapti and Navratri puja when my son Aasman was very young to familiarize him with all this.And I’ve lots of Ganapati idols at home that I’ve collected over the years.”

Director Abhinay Deo who is the son of the veteran stage and film actors Ramesh & Seema Deo says the Ganpati was never a part of their home. “Our family never got the Ganpati home. But I’ve lots of childhood memories attached to the Festival.”

For Punjab-born Sonu Sood,however, Ganesh Chaturthi is very important. “I’ve been keeping Ganapati  for the past eleven years and I look forward to it every year.This year I am shooting in Mysore. But I’ll be home for a day to bring Ganapati in.”

Says Sameera, “Ganesh utsav is very important to me.He is vigneshwar(the obstacle remover). He gives stability and new beginnings.We are  devotees of the GSB Seva Mandal . My family has been its patrons for years.”

Shatrughan Sinha and his wife began bringing Ganesh home when their twins Luv and Kush were born. Lately the practice has been aborted because of  the family’s traveling plans.

Says Shatru’s wife Punam, “Ganesh Chaturthi is very important for us.  Ganesh is the God of all auspicious beginnings in our lives. Nothing moves without His blessings.We did  bring Ganapatibappa into our home Ramayan for 14 years after Luv and Kush were born. Hamare Luv,Kush and Sonakshi Ganpatiji ki kripa hai hamare oopar. Because of our schedules we discontinued the Ganapati at our home. But we visit Ganapati at relatives and friends’ homes.”

Shilpa Shetty has recently begun bringing Ganpati home. “This is the second year he’s gracing our home.I will continue the practice as long as I can. I’m a huge believer in Lalbag Ka Raja.So I get a miniature version of Him at home.”

Though married into a  Muslim family Ayesha Takiya observes the Ganpati season with gusto. “My grandmother keeps a Ganpati at home for 1 ½ days.Since childhood me and my sister and cousins went with our  grandmother to select the flowers and jewelry for the idol and of course to taste the sweets. My grandmother’s coconut modak is everyone’s favourite. Each year for Ganpati the entire family gathers together at my  great grandparents’ home in Colaba.All us girls used to go for the immersion. No more. Now we wait at home. It’s a sad moment when Ganesh leaves.”

TV actress and BJP politician Smriti Irani is a diehard Ganapati devotee. “Every year for the last 11 years we are fortunate to have  Ganapati come home to bless our family. It’s an occasion  for us to give thanks for all the good health and success bestowed on us.”

TV and film actor Ronit Roy has become a Ganapati convert in recent years. “We have Ganapati home for 1 ½  days.We’ve been observing this tradition for the last 6-7 years. My wife started the practice. I followed her.”

Ganapati songs and sequences shot during the immersion in Mumbai are prevalent in Hindi cinema. Shah Rukh Khan and Salman Khan have shot Ganapati songs in Don and Wanted,respectively. Salman, in fact, was looking forward to celebrating both Ganapati and Eid in his home this year. All festivity in the Khan residence has been rudely interrupted by the superstar’s illness.

The entire climax of Bejoy Nambiar’s Shaitaan was shot during the Ganapati visarjan in Mumbai and then edited into the film.

Says filmmaker Sanjay Leela Bhansali, “If you’re a part of Mumbai Ganesh utsav is an intrinsic part of your being. I’ve grown up with the images of the festival . They’re embedded deep in my psyche.And they signify a great sense of spiritual exhilaration for me. There is no getting away from Ganapati in Mumbai.”