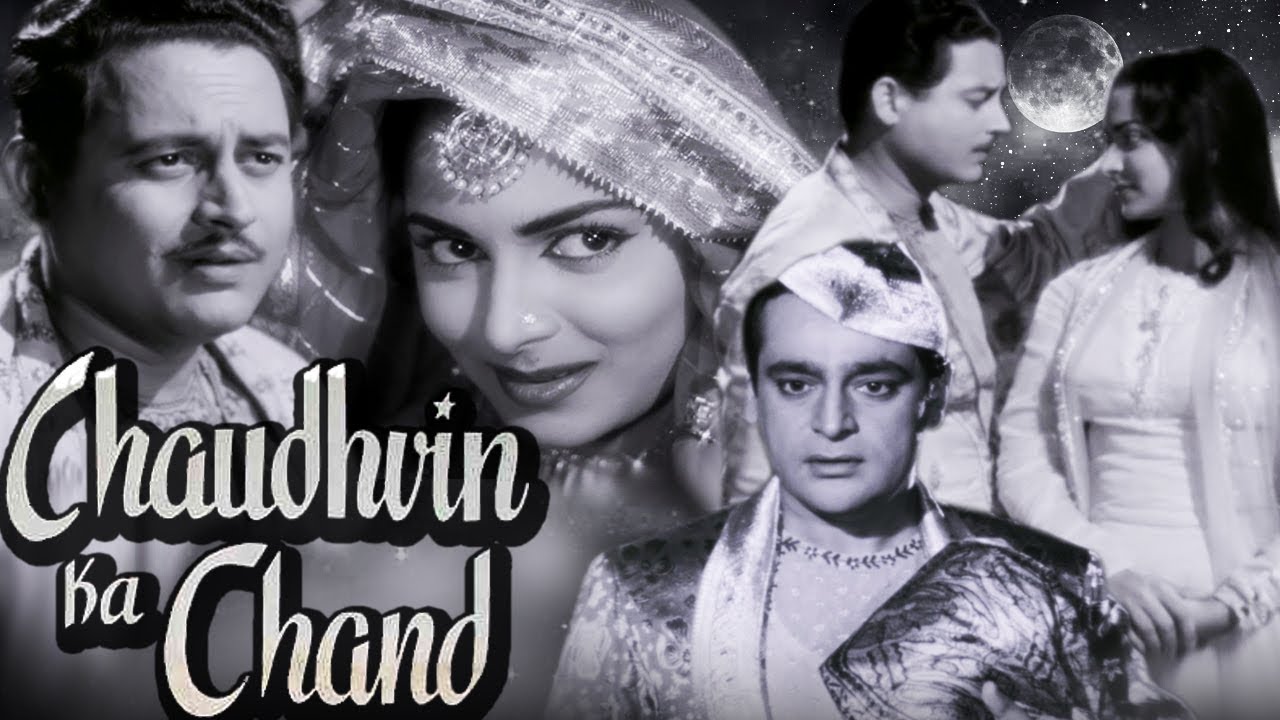 Eid–ul–Fitr has been celebrated in a  big way in many of  our films. The  films below are the  ones where Eid serves as a pivotal plot point .

1.     Chaudvin Ka Chand(1960):  Guru Dutt’s first and only ‘Muslim Social’ a genre  of cinema that  celebrated  the obsolete  if not altogether non-existent Nawabi culture,  was  made to  counter the losses he suffered with  the autobiographical  Kagaz Ke Phool . While that film was  all about life  Chaudhvin Ka Chand  had nothing to do with real life. Two  Muslim  best friends  Aslam and Nawab(played by Guru Dutt and his real-life buddy Rehman) both  love  the same beauty Jameela(Waheeda Rehman). The  title song written by Shakel Badayuni as  the ultimate ode  to  love and beauty, captured  the actress in  all  her  resplendent beauty in colour  while the rest of  the  film is in black and white. The film is  set  in the city of nawabs Lucknow and captures the ethos of  luxuriant  romance  rather  flamboyantly. This is  Guru Dutt’s least  subtle  work. He  t

2.     Mere  Mehboob(1963): This Muslim Social blockbuster  featured Rajendra  Kumar and Sadhana , two non-Muslim actors, who fall in love on a  train  and have  to go  through  various  storms in ornate teacups  before the  ultimate nikaah. The  film was remarkable in  capturing the  colours  music and festive   mood  of  a decadent nawabi culture. The  songs composed by Naushad are specially delightful in their dulcet delicacy. My favourite being Sadhana and  Nimmi dancing around water fountains and  under  sparkling chandeliers singing Mere  Mehboob mein  kya  nahin   not knowing that the ‘Mehboob’ they are both crooning about is  the same  person. After  the  release  of this film Sadhana was  often mistaken for a Muslim, and she  loved  it. Rahul Rawail’s father  H S Rawail directed  this all-time hit.

3.     Pakeezah(1972): Meena Kumari lived  the part  of  the tawaif  Sahib Jaan and the credit  for her  heart-melting  performance  must  got to  a large extent to the  music by Ghulam Mohammed. As  sung by Lata  Mangeshkar, the  Mujras, the  life  and breath   of  every  tawaif’s tale , are  among the  finest heard in  Indian cinema:  Chalte chalte  yuhi koi mil gaya ttha,  Teer-e-nazar  dekhenge, Thare rahiyo  ho banke  yaar re, Inhi logon ne  le lee na dupatta mera…which one  do  we choose? All  or  none?  I could watch Pakeezah  a million times  for  the songs.Meena Kumari’s performance was dependent entirely  on  the  music. During a large part  of  the  film’s shooting Meena  Kumari couldn’t even move because  of ill health  let  alone dance. The Mujra Chalte chalte was  shot with chorus  dancers and Teer-e-nazar  was  performed  by a duplicate  dancer, Padma  Khanna.

4.     Nikaah(1982):  The film that dared to challenge the Sharia laws   of India. Salma Agha, freshly  imported from Pakistan, played wife to Deepak Parasher who divorces her by saying Talaq  thrice. Boldly  the  film questions the male spouse’s right  to discard  his marital  duties on a whim. Salma Agha not only played the lead but also sang Ravi’s chartbusting  compositions which went a  long way in making this  film a superhit during the  year of Amitabh Bachchan’s Nalam Halaal ,  Khuddar, Satte Pe Satta and  Desh Premee.  Again the  music of Ravi  went a long  way in accentuating the  film’s  love triangle where Haider(Raj Babbar) loves Nilofer(Salma Agha) who ends  up marrying Wasim(Deepak Parasher) who  divorces her after saying ‘Talaq’ thrice.While Ms Agha was a Muslim  the two heroes were Hindus.Raj Babbar once told me he had  to brush up his Urdu to understand some of the songs  and dialogues before  vocalizing them.B R Chopra  who directed

5.     Silvat(2018):  Playing a Muslim darzi in Tanuja Chandra  40-minute  film situated in  the crowded gully  of  what looks like Mumbai’s  Haji Ali locality, Kartik is  every bit Anwar,  the shy sensitive  tailor who develops  a secret passion for his  favourite  client: a  lonely abandoned wife  Noor(Meher Mistry) whose husband has  migrated to  Riyadh for  a job with nary  a glance back for the woman he has left behind. The  focus of  the passionate  plot, pulsating with unspoken ardour, is Noor. But it’s Kartik’s Anwar  who silently steals   the show.There is  no exhibition of outward passion here.And yet  so much is said through Anwar’s eyes. Every stolen glance is  laden with longing. The  film is shot on location in a Muslim locality  with  streetside  vendors frying parathas and  malpuas,  hawkers selling bangles . The bustle of  the street is  weighed against those  heavy loaded silences between Noor and Anwar. .This  is 1997. And  riots  don’t  happen  only on the streets. Sometimes they  also occur  in a woman’s  lonely heart.