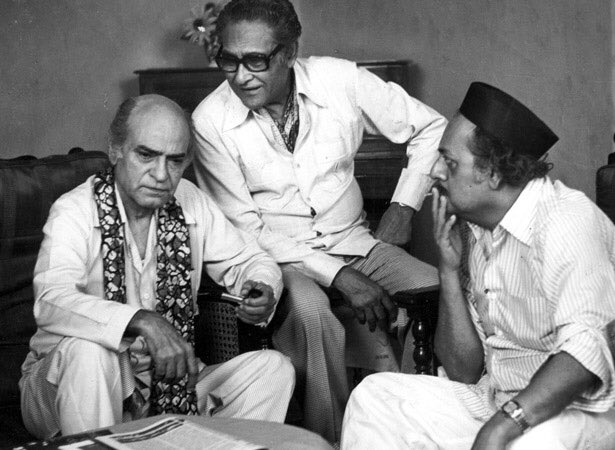 I met  the wonderful Avtar Kishan  Gill in Patna sometime in  the 1980s .He was here to perform  in a play, and we met in  the evening after his performance.  He was very tired and  not in the  mood to talk to  a journalist, and  that too one who was  only  starting  out in  his career.

“Would you mind if I lie down and talk you?”

He conducted  the entire interview in the supine  position ,sometimes  dozing off as he spoke about his  early days and his  very successful stint as a  character  actor in  Hindi cinema.

“I  come from a family where tailoring  is the main profession. I only  played  the  father or the uncle  and  that  too the kind  sort. I was 52  when I did  my first  role,a brief part in Basu  Bhattacharya’s Teesri Kasam.  I was  already bald and looked much older ,so getting patriarchal  parts was easy. Every  film has to have fathers  or uncles to the  hero and heroine. I  was happy to play the roles that came  my way. It  kept  my kitchen  fires burning,” Hangal Saab  reminisced, making sure that  I got the  dates and places right.

His  face lit up when he spoke  about Jaya Bachchan. “I played her father in so many films that  people actually  believed that I was  her father. She  would tell me that fans  would fondly ask her how her  father was, meaning me.  I was  asked  about my daughter  by strangers.  After a while  I’d just  smile and say she was fine: no one wanted to  believe  that we were  not related, so  I let it be. After all cinema is all  about illusion.”

Among the many films that Hangal Saab did as  Jaya Bhaduri’s father  his favourite  was Anil  Ganguly’s Kora Kagaz.

“I played this  quiet  professor dominated by my wife(Achala Sachdev). Jaya and I had a memorable   sequence  where she breaks down and I console her. There were  no words exchanged.   It is  one  of my  favourite scenes,”  Hangal Saab mumbled.

Another  favourite  was  Basu Chatterjee’s Shaukeen. “Along with  Ashok Kumar and Utpal Dutt I  played a ladies’ man. It is  unusual for actors  to be shown  interested   in sex after a certain age.”

Hangal’s best  known  sequence is in Ramesh Sippy’s Sholay where  he played a  blind Muslim father  whose  only son is gunned down by dacoits.

Speaking  about that beloved sequence  Sholay’s  leading man  Dharmendra  says, “To this day  there is not a dry eye  in the theatre when Hangal Saab says, ‘Jaante ho duniya main sabse bada bojh kya hota hai? Baap ke kandhe par bete ka janaza.’ I break down  every time I watch  Hangal Saab in that scene. Hangal Saab showed  us  that the length  of the role  didn’t matter. Even in  a  5-minute  appearance one can leave  a  lasting  impression.”

Shabana Azmi  recalls A K Hangal with much fondness.“He was a very close friend of my family. He costarred with my mother in several plays by IPTA. He was committed to using art as an instrument of social change and was in the forefront of all demonstrations and protests held on social issues. He used to be a tailor, and till the very end dressed nattily and stitched his own suits. He played a wily godman in Shatranj Ke Mohre to perfection, as also a film producer in Sagar Sarhadi’s Tanhai opposite my mum (Shaukat Azmi). I’d rate Sholay, Deewar and Arjun among his most memorable roles. He was a perfectionist and would ask so many questions about his character that all at IPTA would tease me if I asked too many questions and say, ‘Hangal ho gayi ho kya?’. He was a progressive liberal and a secular individual.”

Filmmaker  Saurabh Tiwari  in whose television production Madhubala Hangal  did  his final acting stint in  2012, remembers, “I was amazed by Hangal saab’s resilience. When I went to meet him I was shocked by how frail he was. I quietly made up my mind not to cast him. When I was leaving Hangal saab mumbled, ‘ Pehle scene to suna ke jao.’ I narrated the scene and wondered how he would manage in his condition. On the day of the shooting when he came in a wheelchair, my heart sank. But the minute the camera rolled Hangal saab was a changed man. We tried to make it as easy for him as possible, asking the other actors in the scene to support Hangal Saab. He was alert enough to see through our efforts. ‘ Mere dialogues tum doosron ko kyon de rahe ho?” he asked me. We all burst into spontaneous applause after he finished. While leaving Hangal saab said to me, ‘Bhoolchuk maaf karna.’”

Ashutosh Gowariker   has  many  wonderful  memories  of  Hangal, “In my growing up years, I remember several films that had Hangal saab in pivotal roles. And he always left a mark on me. Till date, I have not seen anyone play a blind man the way he did in Sholay. Years later, on the sets of Lagaan, I marveled at his artistry and craft, his creative inputs towards his character and his spirit to perform. For him acting was not a job but a real attempt to explore the nuances of the character he was portraying. His dedication was so intense that once during Lagaan when he had a back injury, instead of taking the option of going back to Mumbai he stayed on in Bhuj and shot for the film, despite all his pain and discomfort so that the film would not suffer. I saluted him then. I salute him today. I will remain forever indebted to this great actor called A. K. Hangal.”

In actor-director  Anant Mahadevan’s   directorial Dil Maange More, Hangal did an interesting cameo of a music connoisseur who visits a music store and insists a Mukesh number is sung by K L Saigal . “He kept saying ‘Planetarium’ instead of ‘Planet M’. But he corrected himself in the final take. Hangal saab was a real trouper. And full of amazing anecdotes from the time of India’s freedom struggle, and his stint in prison for raising his voice against the British Raj. His experiences were truly inspiring. Although he came from theatre he did the silent grief in Sholay so effectively… It still evokes a gasp of appreciation. But I’m sure he’d be remembered for more than just that scene in Sholay, much more.”

At the  end of our  interview as  I  got up to leave Hangal saab solicitously asked, “Beta, have  you got everything that  you want? Yes? Because  otherwise  I have a lot more to say.”

Never short  of  surprises, A K Hangal started  late  but  succeeded in tailoring a career that is  remembered  to this  day.

Kajol Being Directed by Revathy In Salaam Venky