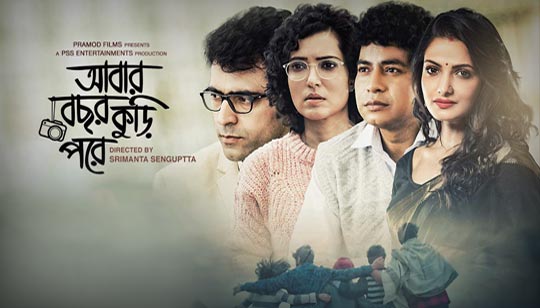 Bengali cinema has been in a  state of creative dormancy  for  a while now. Once the land  of Satyajit Ray,Ritwick Ghatak,Mrinal Sen,  Aparna Sen and  Rituparno Ghosh,  today  the Bengali film industry is an arid wasteland composed of  wannabe Rays  or, worse, wannabe Rohit Shettys. Neither persona  fits  the  bill.Little wonder  , Bangal cinema seems to be going through a premature menopause.

It is with some relief  and  meager pleasure that I saw writer-director Srimanta Sengupta pull off a conventional coming-of-age film plotline  about  four friends(there is  a mention of a fifth who has flown the  coop and  send messages about the delights of  the dollar) who go from college to  jobs to a midlife crisis in a film that runs for  more than  2 ½ hours but seems to take  forever to get there.

I wish  Srimanta  Sengupta had  got  himself a  better editor who would have cut away into the  the unnecessary self-introspections that  besiege  the characters  bringing on  impromptu bouts of paralaytic intertia  in  the narrative.

All the  four protagonists  are into heavy  self-searching when in fact they seem to be woefully cut off not only from one  another but also from the wider reality that defaces  their dreams  so  blatantly.Arun(Abir Chatterjee) and Bonnie(Arpita Chatterjee)  are supposed have been a couple  before they parted. But I saw zero chemistry between them and  it’s hard to imagine that they were ever  together.

Making matters worse is the fact that Arun is played by different actors  in the  present and the past while Bonnie  remains the same; a huge mistake in terms of  a consistent graph  for the couple since  the actor who plays the  younger version of  Abir  Chatterjee looks nothing like him.

A  fine actor  in normal circumstances, Abir here grapples with a slew of serious creative aberrations and a  co-star who plays his  friend/sidekick (Abhishek  Bannerjee) who is present in almost every scene with  Abir in  this plodding maendering pilgrimage into the past. There is also Arun’s  troubled  relationship with his  old father who seems to be a gentle kind  devoted  man. What is  Arun’s problem with his father? We never know.

Srimanta Sengupta’s screenplay overloads  the  narrative with  problems that  have no easy solution, not because they are  insolvable  but  because the characters seem to be burdened with  problems  just so that they can seem preoccupied all the time. Hence they seem stuck in a past of which  we know  little  except that they hung around taking group photos when they were younger.

It’s  like  a man fearing the loss of his job pretending to  be busier than he  actually is.

Which reminds me of an early moment  in the film when Arun announces a massive retrenchment and  all the newly-jobless applaud.The  well-meaning but ponderous  film  misses such biting moment of  truth for a  wannabe  cute-and-cuddly  travel piece where  characters  open doors into their past  but are too lazy to walk through  them.

When Lata Mangeshkar Spoke On The People Who Influenced Her Life