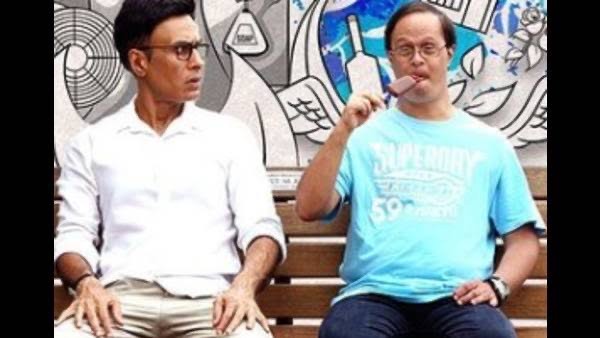 The  best  thing about this  short, sweet, benign drama  is  its upbeat  mood. Even when the situation gets  sticky for Ahaan, played by a real-life Down Syndrome-d chap, he  is  forever  walking on sunshine. The  film follows suit. It is frothy and  ebullient,unwilling to bring in the clouds  even rain is forecast.

Ahaan  opens with  the  protagonist  looking down   from his  room at  boys playing cricket. We  know  how  this sequence would go.There  is  very maturely  portrayed  relationship between  Ahaan and  his constant  companion  Hari(Haresh Raut)  who is  more  than  the domestic help. Hari is  the brother,  the sounding board and  the  cheerleader  Ahaan never had.

When Ahaan’s surly OCD-stricken neighbour Ozzy’s wife leaves  him, we know how it is going to go  to. If you  crave  for surprises  in your cinematic  experience  , this  is  not your  cup of chai.Ahaan  moves in easy breezy  predictable ways. It gives us  not a great  film. But a  decent film with its heart in the right place.

Casting Abuli Mamaji as Ahaan is  more than  half the battle won. The rest  of the cast plays along, some more than others. It must have been hard for Niharika Singh(once  a part of that unusual film Miss  Lovely, now barely seen) to  play along as  Arif Zakaria’s wife. They hardly look like  a married couple.

But we play along  , believing that they are  actually  married to one another. This is  a  film that suspends  all disbelief,  urges  us to drop all cynicism  and  flow in  Ahaan’s fragile  world of half-truths. Gliding along that  slippery hazy path, Ahaan  is  gauzy  woozy hopeful experience, like what we feel when the dentist applies  novocaine. You know the pain  is there under the  surface. We all know  it is  not all balloons  and beaches and  icecreams  and peaches  for  a  specially abled man in India (or for that  matter  anywhere in  the world).

As  a cinema  of wishful thinking Ahaan strikes the right  dreamy  notes. Midway the plot runs out of steam. An eccentric psychiatrist  (Rajit Kapur) is brought into  the scene. He cures  ArifZakaria’s  OCD by  forcing him to attend to  nature’s call in a public toilet.It’s called, get this, Exposure Therapy.  Then there is a picnic where Ahaan  and  the  girl he likes( Bombay Begums’  Plabita  Borthakur) are  joined by  Ozzy and  Anu  .

Life, as seen through  director  Nikhil  Pherwani’s  eyes,  is a picnic. It all seems  too good to be  true. But then when life serves you chocolates  you  can always make brownies a   business  proposition.Since chocolate brownies play an important part  in this sweet-toothed talcum-sprinkled  film, it gets  brownie points for making life look so rosy for a person who walks with   chains  on his  feet but dreams  of  flying.