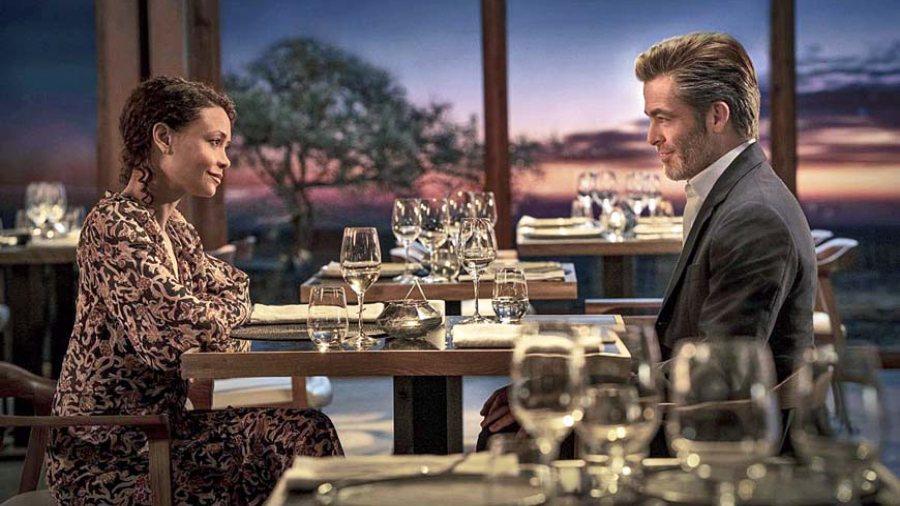 There is  nothing sadder than an espionage thriller which doesn’t hold your attention. All The old Knives is  designed to exude the  subtle  suspenseful scent of  John Le Carre’s world of intrigue  and betrayal. It instead ends up looking like  a  very  poor imitation  of the Bourne  movies and that  too  without the  dexterous  deviousness  of  the  spy genre.

This is a pretentious Bourne Identity  desperately seeking an identity and  in failing to do,  appearing as  half-cooked as a pizza hurriedly withdrawn  from an oven after an electricity failure. The  product lacks crackle and fizz. And the chemistry between Chris Pine  and Thandiwe Newton is  as  persuasive  as  cheap rum being served up in expensive wine glasses.

They  have all the right accessories,  paraphernalia and postures. But the basic mutual passion to make their  love story look intense and,  yes, infinite,  is  completely missing. Pine  and Newton play  two CBI  officers   who are  thrown into the vortex of a re-opened case .A plane hijack from the past with  terrorists  on board behaving as if they had just watched Neerja, is  recreated  to give us  a feeling of what  really happened.

But as  we  know  about the  spy genre by now, nothing is  as it seems. This  becomes  more of a problem than a creative conceit  for the  screenwriter Olen Steinhauer  who also wrote  the novel on  which this nervegrating  drama is based.

Nothing moves in  All The Old Knives,least of all the emotions between the  “intense” lovers who  are shown to be  at dinner  in a posh restaurant which looks suspiciously deluded  of patronage. Maybe everyone fled after eating the bacon there. Pine looks like  he was suffering from indigestion.

The waitress accidentally pours wine  on Pine while  Thandie and he  dine. All the while the  narrative skips and  jumps from  the present to  flashbacks into the  tenebrous past to  establish a  link between the  terror bombing of a flight in 2012  and  the current crisis  of faith in  the  lead pair’s relationship.

While Chris Pine looks  tired  and  in need of  sleep(we can  tell him a  good remedy:  watch your own film), Thandiwe  Newton’s expressions of intense love look like  an attack of migraine.

Oh yes,  the pair has a  sizzling  love-making  sequence where Pine  gets  into his  birthday suit and gives viewers an ample view of his butt. If  that sort of thing is meant to be a  turn-on then I am afraid All The Old Knives  is  frozen in  a  time warp .

It  is  more Rebecca than Casablanca.More  suggestions than resolutions.

The  streets  of London  look fetching. I wish there was  more outdoors here. Most of the time Pine and  Newton are seen playing remember-when  while the  back ground score tries  to be  a bore.

The  non-pivotal characters  include the  very talented Jonathan Pryce  who at one  point has to look into  Pine eyes and say, “Are you accusing me  of  betraying my country. Do you know of  the sacrifices I’ve made?”

None as  great as our two hours which we  allow to be squandered  in  the  hope that some miracle  would change  the tumbling fortunes  of this flaccid  passion-less drama which ends with Chris Pine trickling  blood from his nose and his face in the  pricey bacon.

If only we cared.