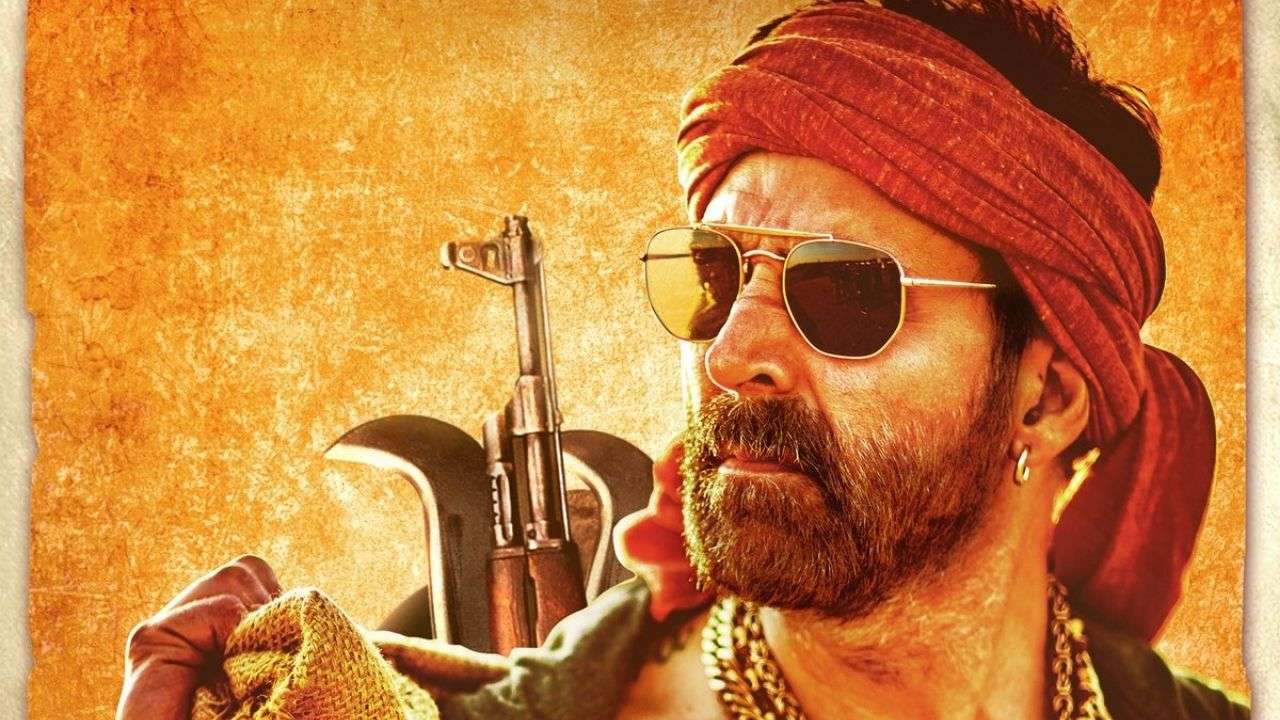 Director
Farhad Samji
Writers
Vikram Montrose,Jaani,Sajid Nadiadwala
Cast
Akshay Kumar,Kriti Sanon,Jacqueline Fernandez
Plot
Myra Devekar is an aspiring director is given a task to come up with a gripping gangster biopic flick. She decides to make a biopic on a real-life gangster! Satisfying the producers’ need for commercialism and her hunger for making a realistic film. Her extensive research only leads to one name, the most menacing, one-eyed ‘Bachchhan Pandey ‘ of Baghwa. Myra tries her best to find out about him, with the help of an old friend, to develop a film script, but fails miserably in all her attempts. When she finally gets the chance to gain an insight into Bachchhan’s life, she ends up getting caught by Bachchhan Pandey .

Bachchhan Pandey Review: Akshay Kumar does  a Pushpa, and gets away  with it. He  kills,destroys property and vandalizes good taste. But hey, his men love him.And the women too. Mr Pandey’s   ragged army  consists   of  Kandi (Saharsh Kumar Shukla), Bufferia Chacha (Sanjay Mishra), Pendulum (Abhimanyu Singh) and Virgin (Prateik Babbar).Each  of  the four is given  a backstory, lest  Mr Pandey be accused of  hogging the  limelight.

I want  to know where Mr Pandey learnt to dance  like  Michael Jackson on  a fullmoon night? He  is as a  ruthless  killer  but in a  lengthy flashback he romances Jacqueline Fernandez with stirring precocity.

In the present the  vivacious Kriti Sanon  play  a  struggling filmmaker(with  an  aging  father who is pushed around on the sets  by an arrogant  jerk of a director, modeled on perhaps someone we  know?) who wants to  make  a bio-pic on  Mr Pandey.He calls  it  a tooth-pic , and everyone is supposed to laugh   or he  will pump  a bullet  or  plunge a knife or  set  the naysayer on  fire with what he calls ‘Iraq ka pano’. Petrol,  silly.

Silliness  cruises through the veins  of this dial-a-joke gangster  comedy. Bachchhan Paandey is  reprehensible, horribly inopportune and  politically incorrect. To make  a film where the hero is a coldblooded killer and marauder  is  a moral vicissitude that we have to  suffer in our  movie experience. Ever since Ashok Kumar in Kismat in 1943, audiences have  favoured bad boys as heroes,whether    it was Dilip Kumar in Ganga Jumna,  Amitabh Bachchan  in Deewaar , Ranbir Kapoor in Rockstar, or  Vijay Deverakonda in  Arjun  Reddy, the  simmering seething  sozzled  anti-hero has been the patron-favoured public  ka pyara , raj-dulara, ankhon ka terror.

But no  cine-hero   so far has been emboldened  to declare  he loves  killing people. I don’t think even Nawazuddin Siddiqui  who played a real-life  serial-killer in an Anurag Kashyap film(don’t want  give the  ruthless killer  any publicity by naming him or  the  bio-pic) ever actually said that.

At one  point in the noisy messy  film(the colour palate is that of  a child left to smear  colours in a kindergarten classroom) he tells Kriti Sanon(an aspiring filmmaker who  wants to make  a bio-pic  on the glass-eyed Pandey)  and her sidekick Arshad Warsi a  sob story about  how he  became a gangster  because  he  didn’t have  money  to pay his father’s  medical bills.Before  Sanon can react ‘Bachchan’ Akshay  Kumar bursts  out laughing and admits he  became what he  is  because  he enjoys killing.

This is the  first  time I’ve seen a leading superstar of mainstream cinema  play a character  who ENJOYS  killing. Even Amjad Khan’s Gabbar Singh didn’t say it aloud. His actions spoke louder than words. Bachchan Pandey’s  words speak as  loudly as his action. He is an aberration a subverted horribly  misconstructed  version of  the  noble heroes  that Akshay  played  in  Air Lift,  Padman, Namaste London and Toilet Ek Prem Katha.He plays  this …this….trashy monster with a glee that suggests, ‘Look you  guys out there.I am bored  of being  good. I want to have  fun playing bad.’

Good luck with that.

It’s  a loathsomely crude part  , the kind that one sees  desperate  actors play in cheap  Mexican  films. Why would a  star of  Akshay  Kumar’s stature play this despicable creature  of the ravines? A  self-indulgence  , perhaps. But this time PM Modi isn’t going to be  pleased.