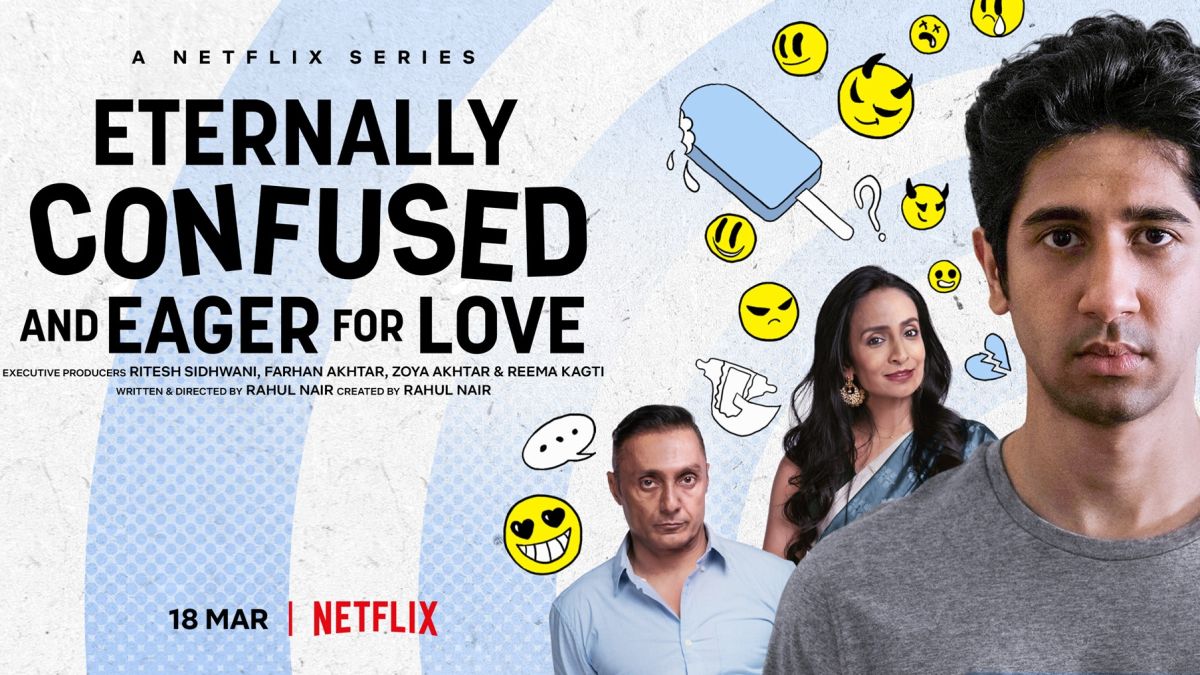 After a  long while, here is something to make you smile and chuckle. Eternally Confused  & Eager  For Love is an  awkward title for what is  customarily  called the coming-of-age  saga. But when  you see how socially awkward  our  20-something protagonist  is, and how often he ends up putting his  foot in his  mouth rather than his dick in a  never-mind, you would realize  the importance of a  title as  gauche as  Ray, played with a liberating transparency by Vihaan Samat who has done some  negligible parts  in the past.

Eternally Confused  and what-not is  Samat’s  actual beginning  as  an actor. He is  a natural born choice to play the muddled  boy-child  with parents , played with  lip smacking relish by  Suchitra  Krishnamoorthy and  Rahul Bose ,  who are refreshingly  non-interfering, although they  do  want  him to  at least shed his  virginity.

In one  of  the  less amusing episodes of this otherwise-hilarious  wannafuck-fest Ray goes looking for condoms in  his parents’  wardrobe and is embarrassed  to  see they are Size Large.

Eternally Confused  & Eager  For Love is a little marvel of   creation. It is a  plotless wonder, almost as aimless as  its protagonist, but somehow  always  getting to the  crux of the  given situation without  having to negotiate too closely the  inner spaces  of  Ray’s  vacuous  life .

The  writing by debutant Rahul Nair is  largely inspired. In English, the  verbal exchanges are relevant and urbane, how youngsters speak to their parents and their  friends,girlfriends  and boyfriends.Nair is  a striking new talent and a welcome addition to the  swiftly stagnating bastion of OTT writers and  directors.

The  veneer of urbanity is  never allowed  to peel  off . Nair is on solid ground when his  young hero  speaks to his parents  and  to his  sturdy and dependable househelp Umesh(played by Brij Bhushan Shukla)  whose frowns  fuel  Ray’s  growing sense  of self-doubt.

The  various  encounters with  different dates  are not always as interesting as we , or Ray would want them  to be.  But that’s life.  Every day cannot be  Sunday.And just because Ray has got them it doesn’t mean he  can use those  condoms at will.

Eternally Confused & Eager For Love allows Ray to be  eternally  confused  eager for love and not afraid  to  let it all hang out. In its  wholehearted  embrace  of  its protagonist’s pelvic  vulnerability, this is  a the most  winsome  streamer in a while.