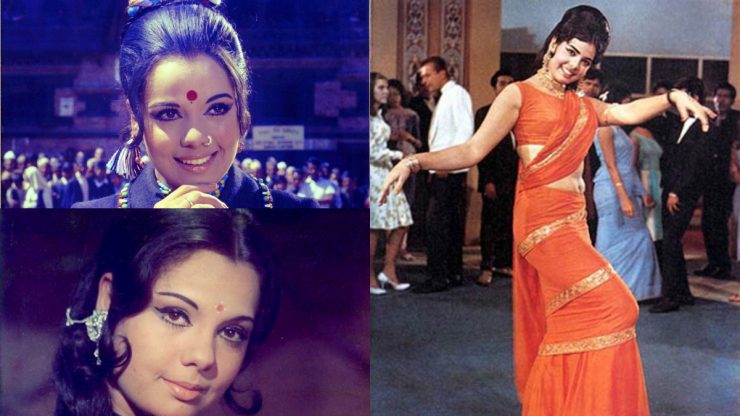 The Gorgeous Mumtaz Turns A Year  Older, Subhash  K Jha  Picks His   5 Favourite Performances  Of  One Of  His Favourite Actresses

Where do   I begin to  pick favourites from the  opulent oeuvre of  Mumtaz, the  classic blend  of  substance and oomph, she blew  the screen apart as a  blind  girl in Jheel Ke Uss Paar with as  much aplomb as the sizzling  moll in Apradh. She danced with as much abandon to the  folksy thump  of  Jai jai shiv Shankar as  she  did to the  ritzy bump-and-grind of  Duniya mein logon ko. One of her kind, that’s Mumtaz.

1.     Khilona(1970): In her breakthrough performance Mumtaz plays  a  prostitute  who is  hired  to  play a wife to psychologically  damaged  man(Sanjeev Kumar). Mumtaz was every inch the domesticated seductress.  Her  performance in the climactic  sequence where she is being dragged  out from the house that she had  adopted as her own, Mumtaz  gives me goosebumps each time.  I’ve seen  the mighty  Jayalalitha  in  the  Tamil    original (Engirundho Vandhaal). Mumtaz is every bit as good, if not better. Incidentally the  role was first  offered  to Sharmila Tagore.Mumtaz  won her first Filmfare award  for best  actress.

2.     Aadmi Aur Insaan(1969): While Saira Banu played the  goodygoody  butter-won’t-melt-in-the-mouth  heroine,  Mumtaz was the one who had all the fun as the clubbing drinking dancing  Rita . It  is said that her  role was extended  considerably  because of her…ummm….closeness to  director  Yash Chopra. I say,  Mr Chopra had good taste. Watch the diva  slither and slide to Asha Bhosle’s Zindagi ittefaq hai kal bhi ittefaq thi aaj bhi ittefaq hai. Righton!

3.     Tere Mere Sapne(1971): Another  Shramila  Tagore reject that  Mumtaz  took over and made it on her own Tere Mere Sapne  based on the  classic A J Cronin novel The Citadel is  about a doctor who loses his way and needs to be healed.As his  disillusioned wife Mumtaz  was beyond brilliant. Aided by the  genius of director Vijay Anand  Mumtaz  zoomed to the zenith of  the  popularity charts  emoting to immortal songs like Jeevan  ki bagiya mehkegi and  Hey maine  kasam lee as  though she had  been singing these enchanting melodies all her life.Incidentally Dev Anand who  once rejected Mumtaz for her  pug nose, did two films in 1971 with her. Der  aaaye  durust aaye.

4.     Jheel Ke Uss Paar(1973): Playing the  blind  Neelu in this god-awful film directed by  Bhappi Soni(the  Indra Kumar  of  the  1970s) Mumtaz soared away above the sordid script,  dancing and singing R D Burman’s edge-less(and I do mean  edge-less) numbers as though to the tenor  born. There are two poignant Lata Mangeshkar numbers  where Mumtaz’s emotive powers were heartbreaking. She sings Babul tere bagha na main bulbul to her dying father(Pran)  .In another  song  Keh rahe hain yeh aansoon baraste hue she is mocked and ridiculed at a  party  for being  poor and blind. Heartbreaking!

Also Read:  Why Is Ram Gopal Varma Quiet On Urmila?

5.     Aaina(1975): Mumtaz’s career’s finest  performance   came at the end when she married and suddenly  quit acting. In K Balachachander’s  hugely underrated  film she played the eldest  of  five  children in an impoverished  Brahmin family who  must go out and earn  a living to  feed her family. Turning to prostitution  Mumtaz’s Shalini forgets herself as she becomes a money-making machine for her family. Bold  unconventional and hearbreaking, Mumtaz’s performance is monumental in this film.

Hey  Gorgeous Lady, there will never be another like you.