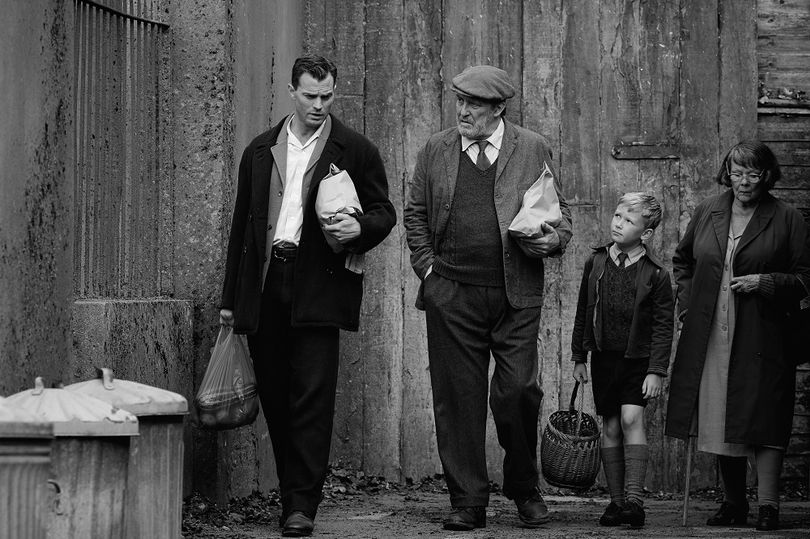 Belfast Movie Review: Growing  up in Belfast at the  peak of  the Catholic-Protestant conflict  in 1969 was not all a bed of thorns  for writer-director Kenneth  Branagh.To  be honest, I saw Branagh looking at his  childhood in  Belfast  with rose-tinted glasses. And  the more he  relies on Haris Zambarloukos’ reflective  black-and-white  photography to give his nostalgic urges a wide berth, the  more  euphoric the broken world of  warfare and strife appears  to be.

Not that  there is anything  wrong with  a happy interpretation of an inherently bleak past. We  all  tend  to shut out the  ugly dark  passages  in our memory bank. This doesn’t necessarily make   the   memory bank any less bankable.

In spite of that dizzying glow  of warm  recollection that bathes Belfast in a blaze of  colours and emotions,  it seems to be an  unimpeachably  scrupulous representation of the past, down to the street where our little 9-year old hero Buddy(newcomer  Jude Hill, doing that Shirley Temple  acting template , whether  by design or willinilly, I can’t say)  lives with his harried mother(Caitríona Balfe, dazzling in her workingclass sexiness) and grandparents(played by  Ciarán Hinds and an almost comically revamped  Judi Dench).

Absentee father (Jamie Dornan) keeps making  weekend appearances to  argue with his  mother on whether they should all move to England. Or else  the family is at the  movies singing along in Chitty  Chiity Bang Bang or  ogling at Raquel Welch  in  One million Year BC.

Interestingly the  films that the family watches in  movie theatres are in colour while  the  family is throughout shot in black-and-white , imbuing the  ambience with a sepia complexion suggesting a close link between memory  and colour(or the lack of it).

Belfast is a beguiling  blend of  realism and style.  It is smokily shot to convey a  sense  of  ongoing  seductiveness as  Ireland burns with religious strife. The emotional scenes  are sniffles in  sly motions of cryptic emotions. Every actor catches on to Kenneth Branagh’s charmed memory waltz , hopping and skipping as he does from a  drama of  despair  to  a comedy of manners   like Jane Austen on a Gabriel Garcia Marquez wrote-trip .

The mood of the presentation, though  deceptively upbeat,  secretes a  deep sense of loss and when little  Buddy finally leaves his  troubled neighbourhood in Ireland with his family, we get a heartbreaking closeup of grandma Judi Dench  whispering, ‘Go, go, and don’t look back.’

If only life’s choices were that simple.

Related Topics:BelfastBelfast movie
Up Next